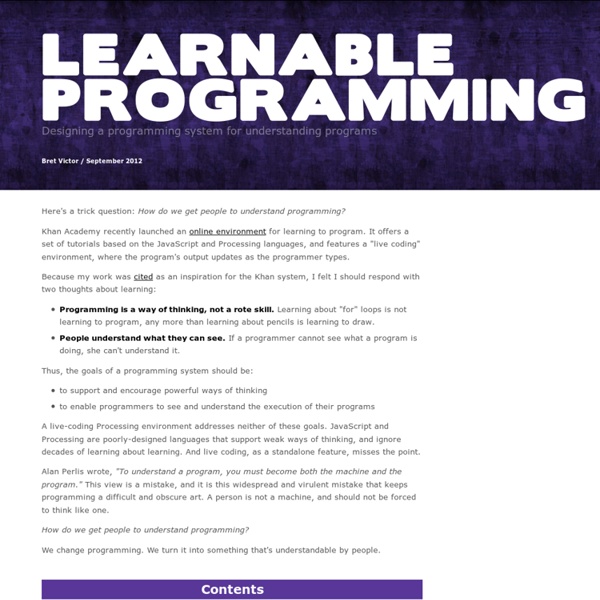 Here's a trick question: How do we get people to understand programming? Khan Academy recently launched an online environment for learning to program. It offers a set of tutorials based on the JavaScript and Processing languages, and features a "live coding" environment, where the program's output updates as the programmer types. Because my work was cited as an inspiration for the Khan system, I felt I should respond with two thoughts about learning: Programming is a way of thinking, not a rote skill. Learning about "for" loops is not learning to program, any more than learning about pencils is learning to draw.People understand what they can see. Thus, the goals of a programming system should be: to support and encourage powerful ways of thinkingto enable programmers to see and understand the execution of their programs A live-coding Processing environment addresses neither of these goals. Alan Perlis wrote, "To understand a program, you must become both the machine and the program."

Ruby, Rails and JavaScript Tutorial Catalog ▶ We’ve been acquired by Pluralsight! ▶ Upgrade your account to Pluralsight ▶ More details… Filter by tag: Danc's Miraculously Flexible Game Prototyping Tiles RPGs love PlanetCute So do platformers... One of the commenters on the SpaceCute posts wondered what would happen if you visited one of those delightful spa-like planetoids that decorate our little galaxy of cuteness.

Codeacademy’s Free Kits Help Kids (and Educators) Learn to Code The Codeacademy office in New York Hoping to get students into coding? Enter Codecademy. The New York-based startup, which teaches users how to code through a free, interactive website, is now packaging its popular online lessons into free, bite-sized kits for teachers and librarians to launch their own mini-Codecademies in class or after school. “We know teachers are busy and we wanted to make it as easy as possible for them to do,” says Sasha Laundy, Codecademy’s curriculum strategist and a former physics and neuroscience high school teacher in San Francisco, CA.

8 Online Programming Contests Today, many companies take advantage of the drawing power of contests to draw out the power of the crowd. We have taken a look at photo contests and design contests before. Then there is Google with its lineup of contests you should keep an eye on. One of the contests Google hosts is CodeJam; its annual programming competition. Google is of course not alone when it comes to calling up the brightest minds. Other biggies like Microsoft with its Imagine Cup and IBM are second to none.

5 Interesting Ways To Learn To Code Many people have realized the importance of learning how to code as a life skill. No matter where you go, and what job you have, it’s always seen as in a positive light if you know how to work some code, even if that’s not your profession. As this importance increases ever more, there are plenty of new initiatives to get kids to learn code in school. While it’s great to see them, you can take control of your coding education by taking some steps on your own. The best – and probably most surprising part – is that it doesn’t have to be a boring ordeal. Don’t believe me? The Free Universal Construction Kit Ever wanted to connect your Legos and Tinkertoys together? Now you can — and much more. Announcing the Free Universal Construction Kit: a set of adapters for complete interoperability between 10 popular construction toys. Fig. 1. The Free Universal Construction Kit.

8 Ways Anyone Can Learn To Code Their Own Software There’s a lot of talk about hardware, devices, and tools for the classroom. But if we learned anything from yesterday’s WWDC Apple keynote, it’s that software is king. It’s what makes or breaks a new product or device. Gone are the days of hardware-first, software-second such as when phones with color screens were viewed as revolutionary.

10 Puzzle Websites to Sharpen Your Programming Skills Solving programming puzzles is a fun way to develop your logical and problem solving abilities. Also, when you’re familiarizing yourself with a new programming language, solving puzzles for that language can help speed up the learning process. Here are the top 10 popular programming puzzle sites that will help test your thinking and improve your programming, problem solving, and logical thinking skills. 1. Become a Programmer, Motherfucker If you don't know how to code, then you can learn even if you think you can't. Thousands of people have learned programming from these fine books: Learn Python The Hard Way Learn Ruby The Hard Way

How I built my first app (with a little help) On the one hand, there are those who think computer coders are the geekiest nerds around. The kind of people – no, let's not beat about the bush here – the kind of men whose lack of personal skills and inability to get a girlfriend simply means that they have too much time on their hands because they're not having sex. Then there are the people like me who think it would be quite cool to hack into the CIA's mainframe. Would I like to learn how to write code in a day?

About learning code, and why it's so hard to learn code, and learning in general. (Also: learning kids how to code with a Turtle). With a book tip "Mindstorms" on learning. by rafweverbergh May 19