0021 Understand the fundamental concepts and principles of Earth 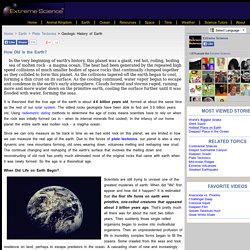 In the very beginning of earth's history, this planet was a giant, red hot, roiling, boiling sea of molten rock - a magma ocean. The heat had been generated by the repeated high speed collisions of much smaller bodies of space rocks that continually clumped together as they collided to form this planet. Top 20 Worst Band Names Ever. So this week's WQvote turned into quite a massive one, forcing us to expand the list in order to have the voice of UG community properly heard. 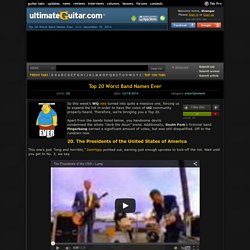 Therefore, we're bringing you a Top 20. Apart from the bands listed below, you handsome devils condemned the whole "Verb the Noun" trend. Additionally, South Park's fictional band Fingerbang earned a significant amount of votes, but was still disqualified. Off to the rundown now. 20. This one's just "long and horrible,"DarkHippy pointed out, earning just enough upvotes to kick-off the list. 19. Up next is the simple, yet confusing gang called the The The. 18. Derived from a comedy act by Steve Martin, Bowling for Soup isn't exactly the best name for a band in UG users' book. 17. As raxano13 noted, "even the band talks about how much it sucks. " 16. They were initially called Deaf Leopard, maybe that one would work better? 15. On several occasions, Dave Grohl himself said that Foo Fighters is "the dumbest band name ever.

" Atmosphere, Biosphere, Hydrosphere, Lithosphere. The area near the surface of the earth can be divided up into four inter-connected "geo-spheres:" the lithosphere, hydrosphere, biosphere, and atmosphere. 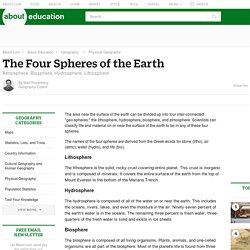 Scientists can classify life and material on or near the surface of the earth to be in any of these four spheres. The names of the four spheres are derived from the Greek words for stone (litho), air (atmo), water (hydro), and life (bio). Lithosphere The lithosphere is the solid, rocky crust covering entire planet. This crust is inorganic and is composed of minerals. Hydrosphere. Moon Facts: Fun Information About the Earth’s Moon. The moon is the easiest celestial object to find in the night sky — when it's there. 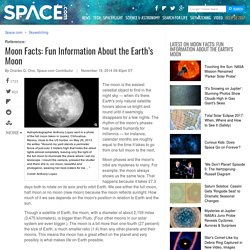 Earth's only natural satellite hovers above us bright and round until it seemingly disappears for a few nights. The rhythm of the moon's phases has guided humanity for millennia — for instance, calendar months are roughly equal to the time it takes to go from one full moon to the next. Solar System Exploration: : Planets. There are more planets than stars in our galaxy. The current count orbiting our star: eight. The inner, rocky planets are Mercury, Venus, Earth and Mars.

The outer planets are gas giants Jupiter and Saturn and ice giants Uranus and Neptune. Beyond Neptune, a newer class of smaller worlds called dwarf planets reign, including longtime favorite Pluto. Planet Lineup Mercury Mercury—the smallest planet in our solar system and closest to the Sun—is only slightly larger than Earth's Moon. Venus. Moon Glossary: Lunar Terms and Definitions. Albedo — This term is a unit-less measure that refers to the how much an object diffusely reflects light from the sun. 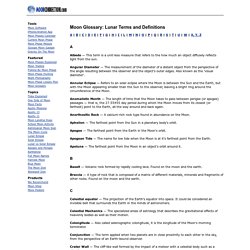 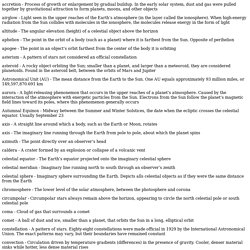 In the early solar system, dust and gas were pulled together by gravitational attraction to form planets, moons, and other objects. Earth’s Orbit Around The Sun. Diagram of the Earths orbit around the Sun. 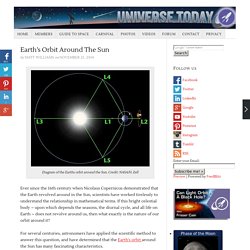 Credit: NASA/H. Zell Ever since the 16th century when Nicolaus Copernicus demonstrated that the Earth revolved around in the Sun, scientists have worked tirelessly to understand the relationship in mathematical terms. If this bright celestial body – upon which depends the seasons, the diurnal cycle, and all life on Earth – does not revolve around us, then what exactly is the nature of our orbit around it? For several centuries, astronomers have applied the scientific method to answer this question, and have determined that the Earth’s orbit around the Sun has many fascinating characteristics. Orbits and the Ecliptic Plane. Earth's Motion - Elementary Science. Astro.swarthmore.edu/astro94/reading/Bennett_ch 4.pdf. Magnificent%20Desolation.pdf. “Elementary Moon Exploration”.PDF. Chapter 3 Earth Materials.