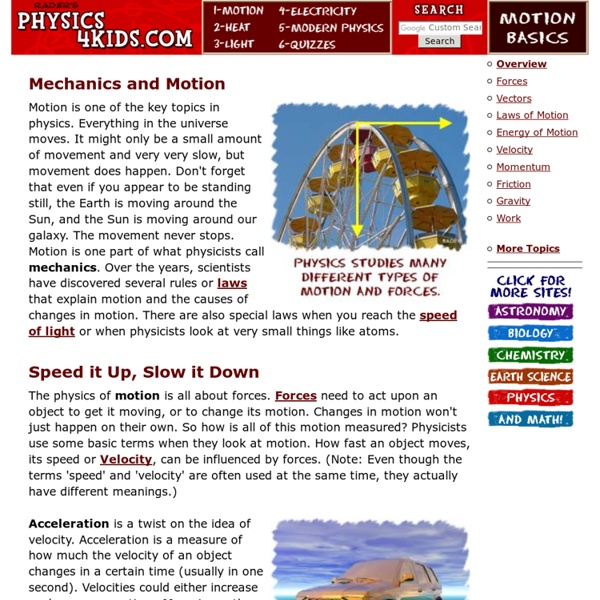 Motion is one of the key topics in physics. Everything in the universe moves. It might only be a small amount of movement and very very slow, but movement does happen. Don't forget that even if you appear to be standing still, the Earth is moving around the Sun, and the Sun is moving around our galaxy. The movement never stops. Acceleration is a twist on the idea of velocity. There are two main ideas when you study mechanics. There are also more complex movements when an object's direction is changing. In order to really understand motion, you have to think about forces, acceleration, energy, work, and mass. Or search the sites for a specific topic.

Motion: Forces Forces are a big part of physics. Physicists devote a lot of time to the study of forces that are found everywhere in the universe. The forces could be big, such as the pull of a star on a planet. The forces could also be very small, such as the pull of a nucleus on an electron. Forces are acting everywhere in the universe at all times. If you were a ball sitting on a field and someone kicked you, a force would have acted on you. Let's look at the forces acting on that soccer ball before you kicked it. If there is more than one force acting on an object, the forces can be added up if they act in the same direction, or subtracted if they act in opposition. There is one totally important formula when it comes to forces, F = ma. Or search the sites for a specific topic. A bowling ball and feather fall in world's biggest vacuum chamber You probably already know how this one ends, but that doesn't make watching it play out any less spectacular. [optional caption text here] Image: [name here]/Shutterstock The combination of bowling ball and feather is the perfect way to demonstrate air resistance, also known as drag. Because the shape of the feather allows it to endure way more air resistance than the bowling ball, it takes much longer to fall to the ground. British physicist Brian Cox wanted to see this primary-school problem play out in a vacuum, where there is zero air resistance to mess with the results. When not in use, the chamber contains around 30 tonnes of air, but when it’s turned on, all but around 2 grams of air are sucked out to create an artificial vacuum.

Workshops -- Science in Focus: Force and Motion Explore science concepts in force and motion and come away with a deeper understanding that will help you engage your students in their own explorations. With science and education experts as your guides, learn more about gravity, friction, air resistance, magnetism, and tension through activities, discussions, and demonstrations. Extensive footage shot in real classrooms shows students learning and building on ideas as they explore the relationships among motion, force, size, mass, and speed. As you watch the students develop understanding through activities that connect science concepts to real-world phenomena, you will be asked to think about your own ideas on force and motion and compare them to what you observe. Watch for the symbol on the workshop video, then click the button below for that workshop, to find the corresponding Web Highlights.

Newton’s 3 Laws, with a bicycle - Joshua Manley There was this fellow in England named Sir Isaac Newton. A little bit stuffy, bad hair, but quite an intelligent guy. He worked on developing both calculus and physics at the same time. In his work, he came up with the three basic ideas that we still use to describe the physics of motion (up to a point). The ideas have been tested and verified so many times over the years that scientists now call them Newton's Three Laws of Motion. It is helpful when describing forces acting on an object to label their direction. Draw a vector diagram of a bicycle being pedaled and label all of the forces which act on it. Bicycle with thick tires, like mountain bikes, tend to go slower than bicycles with thin tires, like road bikes, when you apply the same amount of force, even if the bicycles are the same weight. According the the conservation of energy theory, energy cannot be created or destroyed.

Learn The History Of Physics In 4 Minutes Aristotle was wrong. He claimed that heavier items fell faster than lighter items. Had he actually tested the theory, using a high-tech tool as sophisticated as a ladder, a ledge, or a cliff, he’d have immediately realized that it couldn’t possibly be true. Because Galileo did test the theory, and he found that balls of various mass fell at the exact same rate. And then he skydived off the Leaning Tower of Pisa in celebration just to rub it in Aristotle’s wrong dead face. Well, at least that’s what happened according to this fantastic animation directed by Åsa Lucande for BBC Science. [Hat tip: neatorama]