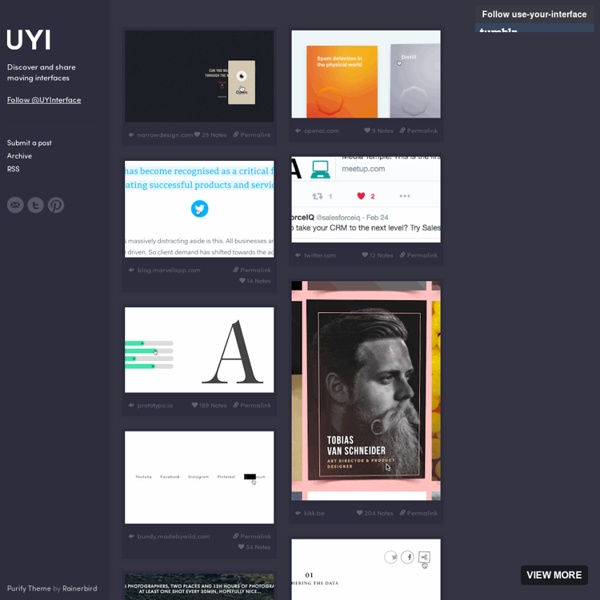 Grundini Peter Grundy and Tilly Northedge met at the Royal College of Art in the late 70s where they became interested in a visual communication that explained rather than sold things. In 1980 they started a studio to do information design in a new and creative way which they called Grundy & Northedge Hugh Aldersey-Williams writing in Graphis in 1995 said of them; The humble basic communication of information has never had the glamour of other areas of design. The creation of a poster casts the designer as an artist. Think Of Your Life As A Game. This Strategy Guide Tells You How To Win It At times, maybe in our darker moments, some of us have probably entertained the thought that our earthly existence is just a game. And others among us may have "gamified" certain parts of our life--fitness, let's say. But what if you actually did view your whole life as a game--a video game--and used gaming strategy to make every decision? Oliver Emberton is the founder of Silktide, a company whose software improves website functionality and efficiency. Now the blogger and programmer has turned life coach, and his goal is to improve the functionality and efficiency of your daily existence. He's done so with a "Strategy Guide to Life": a faux RPG instruction sheet on how to navigate the real world.

UX Lab: How vivid animation can uplift digital experiences — Intuity Media Lab The Illusion of Life by Frank Thomas and Ollie Johnston Since publishing the article about applying emotions to interaction design I’ve been fascinated by this subject, tackling questions like: How do you design animations that trigger positive emotions? What does it take to create a transition that feels vivid and is fun to use? Brand New UnderConsideration is a graphic design firm generating its own projects, initiatives, and content while taking on limited client work. Run by Bryony Gomez-Palacio and Armin Vit in Austin, TX. More…

Mission Control - Always With Honor Always With Honor is the collective work of Tyler & Elsa Lang.  Their mission is to create work that reflects their curiosity and pursuit of clarity. Client List Audubon Boke Bowl Bon Appetit Businessweek Cascadia Ciderworkers United Chronicle Books Esquire Facebook Fortune GOOD GQ Harper Collins Kiplinger Metropolis Microsoft Money Monocle MTV New York Times Nike Ogilvy & Mather Path Real Simple TED The Atlantic The Manual Threadless Toyota UBS VSA Wired Xbox Frog Chief Creative Officer Leaves To Start His Own UX Company After 19 years at Frog--eight of which he was the chief creative officer-- Mark Rolston has left the illustrious design firm to start a new, self-funded firm of his own called argodesign. The new company will focus on groundbreaking UX. “I want to offer perspective on design that’s not all about the visible artifact,” Rolston tells Co.Design. “It’s moving into behavior, the interaction between a human and a machine when the machine isn’t immediately evident, but is instead more of an entity like HAL.

The psychology of user interface (part I - spatial visualization) People often misunderstand what drives good user interface. Certainly graphics is very important in the visceral sense that something is "cool", but in terms of whether someone understand how to do what they want to do, it should be obvious there is a lot more to it than that. There are a bunch of rules that are worth learning that can greatly improve your product. Interface Beatport's Pro app for the Mac offers a shopping experience that's tailored for the way DJs shop for music. The app lets users analyze their music (tracks, sounds, and playlists) to prepare sets and add music to their playlists. Here are some of the elements of the version 2 interface related to shopping in the app. Beatport comes close to the experience of shopping in a record store, breaking down music into genres and sub-genres.

Move Over Product Design, UX Is The Future For decades, the most successful businesses thrived on product innovation as the natural strategy to increase revenues, market share, and loyalty. Fast forward to 2014: today’s product innovations, and the growth they create, are often incremental, narrow, and fleeting. Take TVs or PCs--every competitor quickly matches the latest features, speed, brightness. The Art of UI Animations, Lean UX SF Usage and performance Usage Only two properties are required for a CSS transition. Top 10 Sites for Designers: July 2016 Edition Each month, HOW’s art director Adam Ladd selects a series of inspiring websites of interest to designers and creatives. This month’s selection includes an update to Google Fonts, a platform that links color with Instagram photos, and a product design industry report. 1.