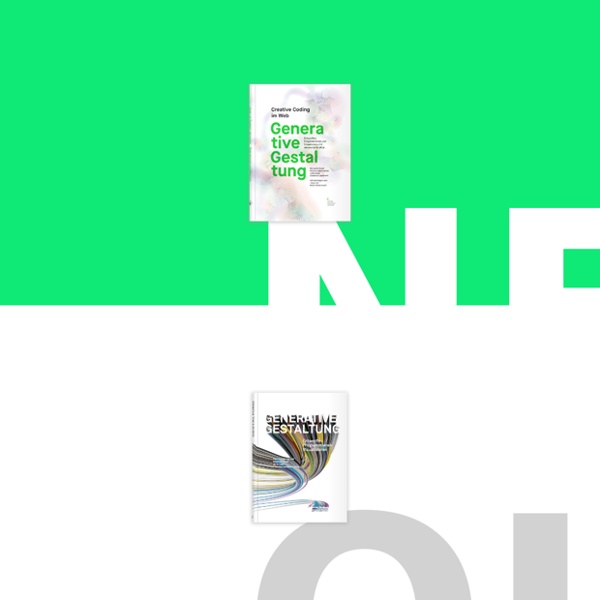 Books Processing: A Programming Handbook for Visual Designers and Artists Casey Reas and Ben Fry (Foreword by John Maeda). Published August 2007, MIT Press. 736 pages. Hardcover. » Order from Amazon.com Codes - GENERATIVE GESTALTUNG 2016-03-15RT @bndktgrs: 幸せなコーディング! Launched: Our #GenerativeDesign book has also a 🇯🇵 website now!👍 [Link] Cheers @BugNews! Blog + News » New Media Artworks: Prequels to Everyday Life - Nightly As an occasional emissary for new-media arts, I increasingly find myself pointing out how some of today’s most commonplace and widely-appreciated technologies were initially conceived and prototyped, years ago, by new-media artists. In some instances, we can pick out the unmistakable signature of a single person’s original artistic idea, released into the world decades ahead of its time — perhaps even dismissed, in its day, as useless or impractical — which after complex chains of influence and reinterpretation has become absorbed, generations of computers later, into the culture as an everyday product. This story forms the core argument for including artists in the DNA of any serious technology research laboratory (as was practiced at Xerox PARC, the MIT Media Laboratory, and the Atari Research Lab, to name just a few examples): the artists posed novel questions which wouldn’t have arisen otherwise. In other instances, we detect a whiff of outright theft. Acknowledgements

The Nature of Code Hello! By browsing the table of contents on your left, you can read the entire text of this book online for free, licensed under a Creative Commons Attribution-NonCommercial 3.0 Unported License. Start reading the introduction now! If you like this book, please consider supporting it via the links below: Rosemary Hill · At the Hayward: David Shrigley · LRB 23 February 2012 - Nightly There has been a certain amount of huffing and puffing among the usually imperturbable gallery-going set about David Shrigley’s Brain Activity exhibition at the Hayward (until 13 May). People who value the power of art to shock far too highly ever to be shocked by it themselves, have nevertheless been somewhat put out, complaining that Shrigley, who is best known as a cartoonist, should have been given a solo show in such a prominent venue for serious modern art. Shrigley himself, who describes his work as ‘somewhere between handwriting and drawing’, and furthermore ‘not the kind of drawing where you’re trying to get their eyes in the right place’, has confirmed that he is being taken ‘far more seriously’ than he should be.

Learnable Programming Here's a trick question: How do we get people to understand programming? Khan Academy recently launched an online environment for learning to program. It offers a set of tutorials based on the JavaScript and Processing languages, and features a "live coding" environment, where the program's output updates as the programmer types. Just Landed: Processing, Twitter, MetaCarta & Hidden Data I have a friend who has a Ph.D in bioinformatics. Over a beer last week, we ended up discussing the H1N1 flu virus, epidemic modeling, and countless other fascinating and somewhat scary things. She told me that epidemiologists have been experimenting with alternate methods of creating transmission models – specifically, she talked about a group that was using data from the Where’s George? project to build a computer model for tracking and predicting the spread of contagions (which I read about again in this NYTimes article two days later). This got me thinking about the data that is hidden in various social network information streams – Facebook & Twitter updates in particular.

The dreadful luminosity of everything (On light: the title is taken from Kei Miller’s A Light song of Light, which says all of this so much better.) One of my favourite artworks in the world is Michelangelo Pistoletto’s ‘Cubic Meter of Infinity‘, which I first saw in Tate’s Arte Povera exhibition about ten years ago. It consists of a box made of inward-facing mirrors, and it bends the mind. If there is light in the box, it must be infinite, but if there is no light, what is reflected? I thought of Pistoletto when reading Andrew Blum’s Tubes, on the physical infrastructure of the internet. Of the millions of miles of light transmitted through fibres beneath the sea and street, sheathed in black plastic, invisible to the eye, visible only at the point of transformation or repetition, a light that illuminates at a distance.

Michelangelo Pistoletto - Nightly In 1961, after making a series of reflecting black-ground paintings significantly entitled The Present , Pistoletto conducted a series of experiments intended to achieve the highest degree of objectivity—the kind of objectivity shown in the early mirror paintings. To make the background more reflective he tried using aluminum sheets, which he applied to the canvas ( Grey Man from Behind , 1961). Finally he identified mirror-finished steel as the best material. To give maximum objectivity to the figure, too, he decided to use photography. Several trials followed.