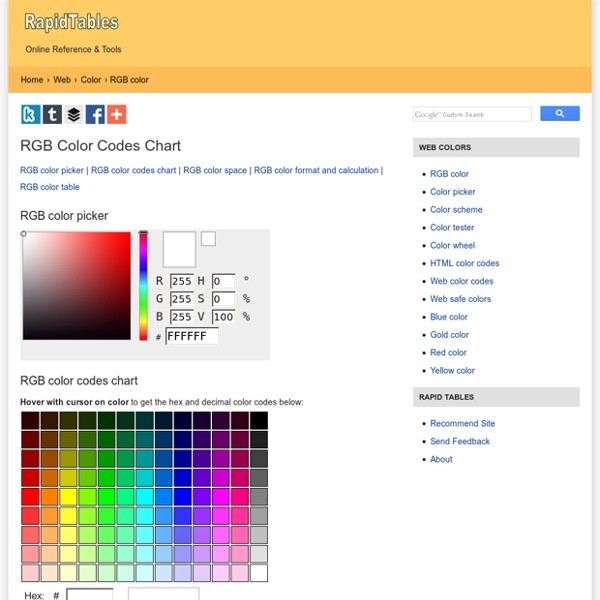 Color Theory for Designer, Part 3: Creating Your Own Color Palettes While this information is important, I’m sure a lot of people were wondering when we were going to get into the nitty-gritty of actually creating some color schemes. That’s where Part 3 comes in. Here I’ll be talking about methods for creating your own color schemes, from scratch. Further Reading on SmashingMag: A Quick Review Let’s start with a quick review of what was covered in parts 1 and 2. More after jump! In part 2, we covered color terminology: hue (what color something is, like blue or red); chroma (how pure a color is, the lack of white, black or gray added to it); saturation (the strength or weakness of a color); value (how light or dark a color is); tone (created by adding gray to a pure hue); shade (created by adding black to a pure hue); and tint (created by adding white to a hue). Traditional Color Scheme Types There are a number of predefined color scheme standards that make creating new schemes easier, especially for beginners. Monochromatic Examples: Analogous Complementary

Color Theory for Designers, Part 1: The Meaning of Color Let’s dive into color theory. We’ll discuss the meanings behind the different color families, and give some examples of how these colors are used. There are few things in design that are more subjective—or more important—than the use of color. A color that can evoke one reaction in one person may evoke the opposite reaction in another, due to culture, prior association, or even just personal preference. Get email updates about next articles. Color theory is a science and art unto itself, which some build entire careers on, as color consultants or sometimes brand consultants. There’s a lot to it, though. This is the first in a three–part series on color theory. More after jump! Warm Colors Warm colors include red, orange, and yellow, and variations of those three colors. Red and yellow are both primary colors, with orange falling in the middle (making it a secondary color), which means warm colors are all truly warm and aren’t created by combining a warm color with a cool color. Examples

Color Models The purpose of a color model is to facilitate the specification of colors in some standard generally accepted way. In essence, a color model is a specification of a 3-D coordinate system and a subspace within that system where each color is represented by a single point. Each industry that uses color employs the most suitable color model. RGB Color Model In the RGB model, each color appears as a combination of red, green, and blue. Primary and Secondary Colors for RGB and CMYK Models The color subspace of interest is a cube shown in Figure "RGB and CMY Color Models" (RGB values are normalized to 0..1), in which RGB values are at three corners; cyan, magenta, and yellow are the three other corners, black is at their origin; and white is at the corner farthest from the origin. The gray scale extends from black to white along the diagonal joining these two points. Thus, images in the RGB color model consist of three independent image planes, one for each primary color. RGB and CMY Color Models

Color Theory For Designers, Part 2: Understanding Concepts And Terminology If you’re going to use color effectively in your designs, you’ll need to know a few color concepts, as well as color theory terminology. A thorough working knowledge of concepts like chroma, value, and saturation is key to creating your own awesome color palettes (which we’ll get to in Part 3). [Content update: August 2017] In Part 1: The Meaning of Color of this color theory series, we covered the meanings of different colors. How To Create Your Own Color Schemes Let’s talk about creating your own color schemes, from scratch, covering the traditional color scheme patterns (monochrome, analogous, complementary, etc.), and others. Hue Hue is the most basic of color terms and denotes an object’s color. More after jump! Examples Chroma Chroma refers to the purity of a color. In design, avoid using hues that have a similar (but not identical) chroma. Saturation Saturation refers to how a hue appears under particular lighting conditions. Value Value could also be called “lightness.” Tones Shades

CMYK color model Color printing typically uses ink of four colors: cyan, magenta, yellow, and key (black). When CMY “primaries” are combined at full strength, the resulting “secondary” mixtures are red, green, and blue. Mixing all three gives black. The CMYK color model (process color, four color) is a subtractive color model, used in color printing, and is also used to describe the printing process itself. CMYK refers to the four inks used in some color printing: cyan, magenta, yellow, and key (black). The "K" in CMYK stands for key because in four-color printing, cyan, magenta, and yellow printing plates are carefully keyed, or aligned, with the key of the black key plate. The CMYK model works by partially or entirely masking colors on a lighter, usually white, background. Halftoning[edit] This diagram shows three examples of color halftoning with CMYK separations, as well as the combined halftone pattern and how the human eye would observe the combined halftone pattern from a sufficient distance.

Principles of Design: Color Over the past five weeks I’ve written about simple principles you can employ to improve your designs, namely Contrast, Proximity, Balance and Value. In this final part of the series we’re looking at color. Color in design is a huge topic in itself, and I will undoubtedly return to it in future blog posts, but for today let’s take a look at how you can use color schemes when creating a mood for your design. Color is an integral part of our lives. Something’s not quite right here. So how do you go about choosing the right colors for your design? Warm and Cool The three traditional primary colors are red, blue and yellow. The image above shows colors arranged in the order of the spectrum: Red, orange, yellow, green, blue and purple (going anti-clockwise). Monochromatic Color Schemes The monochromatic color scheme uses variations in lightness and saturation of a single color. Monochromatic scheme with a blue base Monochromatic scheme with a red base Analogous Color Schemes Triadic Color Schemes

Principles of Design: Proximity Proximity in design simply means that objects near each other are seen as a unit. It really is that simple and it’s something you see every day. On your web page or your business card, related information is placed closely together and it forms a visual unit. Often when people are getting started with design, there is a temptation to throw everything on the page and fill up every square centimeter of space with type and images. Using the principle of proximity, you’ll find as you group those items that have something in common, and separate those items that don’t, a clear visual hierarchy stands out on the page. A practical example is a list, for example a sidebar in a blog. The image below shows two lists of the same items. We can take our list further with the law of proximity and create more logical groupings and put space between the items that shouldn’t be grouped together. You can now easily see that within each section of the list there are sub-sections.

Gestalt – Grouping – Proximity, Similarity, and Closure « Lens, Light & Composition In physics, any two objects will cause a certain attraction force on each other. They call this gravity. A similar force exists in electromagnetic fields called magnetism. The different types of grouping are: proximity, similarity, continuity, closure and pragnanz. Consider that much of this topic of Gestalt may seem overly simplistic, but it helps to explain the actions of the unconscious mind during the act of viewing and you will see later how it supports the Principles of Art and Elements of Design. Proximity Proximity grouping is the influence objects within close proximity assert on each other. In the second image, we still have a grid of objects, but the brain accepts each set of double rows as being a single group of objects, though of the same shape. Proximity of shapes affects the visual relationships of shapes within a frame, but the illustration may be a bit too simplistic. We now see 3 shapes of blue and 1 shape of grey. Similarity Color can be used to reinforce Similarity.

White Space as Used in Page Layout Negative space is a positive design element. It's white space (shown in black in this image) | Design & Layout | Alpha Index of Full Glossary: A small image and minimal text within generous margins gives the impression of something special, elegant, or high class. Definition: One of the principles of design, white space is the absence of text and graphics. Designing With White Space "Achieve a balance of ink and white space using a mix of techniques... as appropriate to your design." — How to Add White Space to a Layout "The most prominent white space in a design is the margins all around the page." — Using Margins in Desktop Publishing "Is there such a thing as too much white space? "Avoiding pages of gray text usually involves injecting more white space and contrast into the text." — Gray Text Also Known As: air | breathing room | empty space

The Principles of Graphic Design The principles of design suggest how a designer can best arrange the various elements of a page layout in connection to the overall design and to each other. Generally, all the principles of design apply to any piece you may create. How you apply those principles determines how effective your design is in conveying the desired message and how attractive it appears. There is seldom only one correct way to apply each principle but check your documents to see how well you have applied each of these six principles of design. Balance Visual balance comes from arranging elements on the page so that no one section is heavier than the other. Proximity / Unity Do your designs have unity? In design, proximity or closeness creates a bond between people and between elements on a page. Alignment Alignment brings order to chaos. Repetition / Consistency Contrast Do you have good contrast among elements of your design? White Space