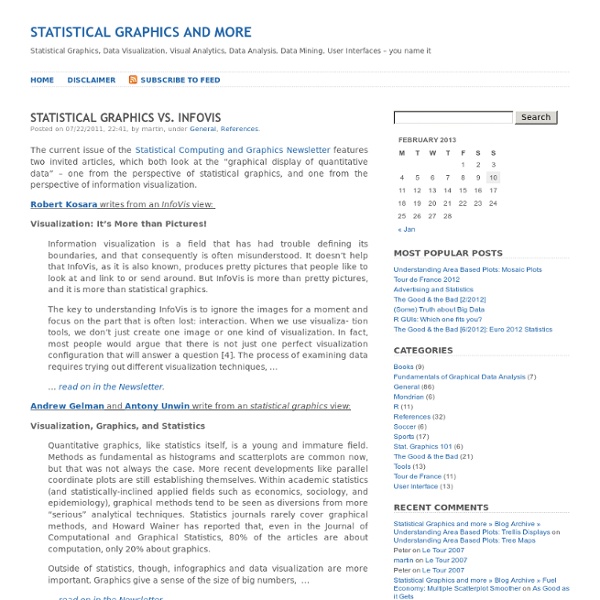 The current issue of the Statistical Computing and Graphics Newsletter features two invited articles, which both look at the “graphical display of quantitative data” – one from the perspective of statistical graphics, and one from the perspective of information visualization. Robert Kosara writes from an InfoVis view: Visualization: It’s More than Pictures! Information visualization is a field that has had trouble defining its boundaries, and that consequently is often misunderstood. The key to understanding InfoVis is to ignore the images for a moment and focus on the part that is often lost: interaction. … read on in the Newsletter. Andrew Gelman and Antony Unwin write from an statistical graphics view: Visualization, Graphics, and Statistics Quantitative graphics, like statistics itself, is a young and immature field. Outside of statistics, though, infographics and data visualization are more important.

Rulers About us Role The National Audit Office (NAO) scrutinises public spending on behalf of Parliament. Our audit of central government has two main aims. By reporting the results of our audits to Parliament, we hold government departments and bodies to account for the way they use public money, thereby safeguarding the interests of taxpayers. In addition, our work aims to help public service managers improve performance and service delivery. The Audit and inspection rights are vested in the head of the National Audit Office, the Comptroller and Auditor General (C&AG). Independence The Comptroller and Auditor General, Amyas Morse, is an Officer of the House of Commons. Strategic Priorities Our work reveals recurring issues across different government departments and bodies, including three general areas where we have found that improvement is frequently needed. Other bodies For UK Statistics - see the: Office for National Statistics For Local Government spending – see the: Audit Commission

Public Expenditure Statistical Analyses - HM Treasury PESA Objectives Public Expenditure Statistical Analyses (PESA) is the regular publication of information on government spending. PESA has two main objectives and is therefore based on two datasets: Budgets: To provide information on government spending plans and outturn expressed in terms of budgeting aggregates. PESA Publications The main annual PESA release comprises two separate documents: a National Statistics release of recent outturn data published on the HM Treasury website in late spring; and a PESA Command Paper published shortly after and consistent with the National Statistics release, which additionally includes estimated outturn for the latest year and spending plans for the rest of the Spending Review period. In addition to this: PESA 2010 Command Paper PESA 2010 was published on Thursday 1 July 2010. PESA 2010 Command Paper Consistency of PESAs Archived publications Related links Back to top