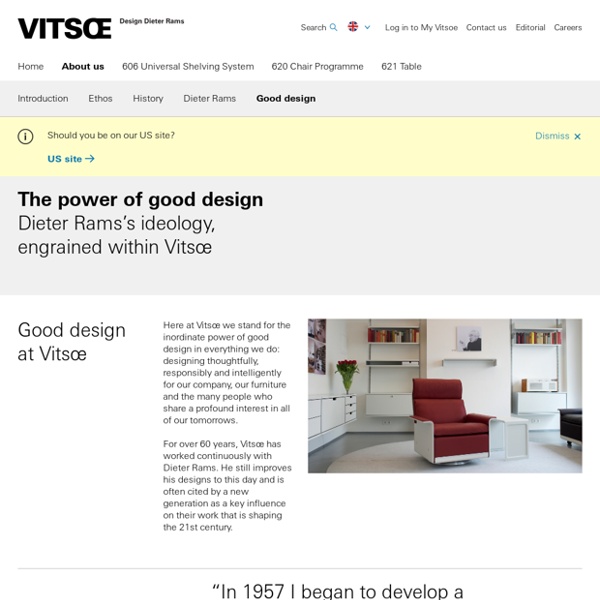 Back in the late 1970s, Dieter Rams was becoming increasingly concerned by the state of the world around him – “an impenetrable confusion of forms, colours and noises.” Aware that he was a significant contributor to that world, he asked himself an important question: is my design good design? As good design cannot be measured in a finite way he set about expressing the ten most important principles for what he considered was good design. (Sometimes they are referred as the ‘Ten commandments’.) Here they are. Good design is innovative The possibilities for innovation are not, by any means, exhausted. Good design makes a product useful A product is bought to be used. Good design is aesthetic The aesthetic quality of a product is integral to its usefulness because products we use every day affect our person and our well-being. Good design makes a product understandable It clarifies the product’s structure. Good design is unobtrusive Products fulfilling a purpose are like tools.

How To Create a Detailed Vector Sugar Skull Illustration Follow this Illustrator design tutorial to create a super detailed sugar skull illustration made from lots of sweet vector elements. We’ll use a mix of basic and advanced Illustrator tools to build various decorative objects to slowly build up the features until we have an awesome looking skull design that pays homage to the Mexican Dia de los Muertos tradition. View full size illustration

ReubenMiller [image via designboom] Now that it's spring, there have been lots of around-the-house projects begging for attention. I've also been looking at a lot of fresh inspiration. Here's a collection of things I've been working on and cool things I thought you might enjoy seeing. Star Ocean Star Ocean (スターオーシャン, Sutā Ōshan?) is a franchise of action role-playing video games developed by the Japanese company tri-Ace and published and owned by Square Enix (originally Enix). Creation and influence[edit] Design[edit] Star Ocean games are known for their real-time battle engines, and, for being one of the first of its kind to come to the consoles. Battles take place on a separate screen, but all characters (rather than waiting in one spot and taking damage) are fully mobile in three dimensions, can dodge and chase foes, and must cast their spells and deploy attacks despite enemy harassment.

The Lost Principles of Design In the instant age that design has evolved into recently many of us often stray away from the basics. If you had a professor in college who taught you the fundamentals of design these may be engrained into your head. For the self-taught, you may have a book on your desk with these very principles. However, the more and more people that flood the internet for design content need to learn the basics before trying to make a stellar gradient in Photoshop. While this is cool and amazing right now, there will come a point where this style is strayed away from and a new style is made. In history, this lesson has repeated itself with movements like the Bauhaus and Swiss Modernism and will soon come label our current trends as part of history.

Autodesk Releases Free App That Brings 3-D Printing To The Masses [Video] If you hear "maker culture" and instantly think of grease-stained weirdos who drone on about steampunk and "screws not glue"... well, you wouldn't be wrong. But when a giant software company like Autodesk throws its weight behind "makers," you know it's much more than a subculture. "There was this huge digital content generation that emerged, but now that 'Generation C' is turning into 'M,' the Make generation," Tatjana Dzambazova, Senior Product Manager at Autodesk, tells Co.Design. "They want to start physically fabricating the things that they create digitally." And now Autodesk is providing that power, in a free application called 123D that will let any maker, professional or amateur, design and 3D-print anything on demand from toys to turbines. 123D lets you easily fabricate objects, not just visualize them.

42 Free Online Magazines for Designers Art and design magazines are designers close companion. Not only it feeds us with latest trends and news in the design industry, it’s also a good source of inspiration, particularly useful for those who hit the design block frequently. Just in case you weren’t aware, there’s a huge pool of free design magazines on the net; we meant those softcopy magazines you can either browse online or download (.PDF, .SWF) for offline viewing. Not only they have high quality content, each issue released is also free. We thought that’s generous of these folks.

10 tips on how to destroy employee morale I have (mostly) had the fortune of working for some very good managers/leaders throughout my career, including some excellent Singaporean managers. And I myself have had to lead employees and teams in Singapore, rest of Asia, Europe and the US. However unfortunate a situation you find yourself in, the times we learn the most are often those in which we are placed in the most difficult situations and that’s why I have always said, “There is no such thing as a bad experience”. One of these difficult situations, which I found myself in, was working for a boss who did all the wrong things when it came to creating a positive, energized, work environment. Yet it was in this very situation that I found myself learning through first hand experience, how NOT to manage and lead others and I firmly believe (or certainly hope) that through this experience more than any others, I have become a better leader myself. So what have I learned?