The Internet Glossary of Statistical Term 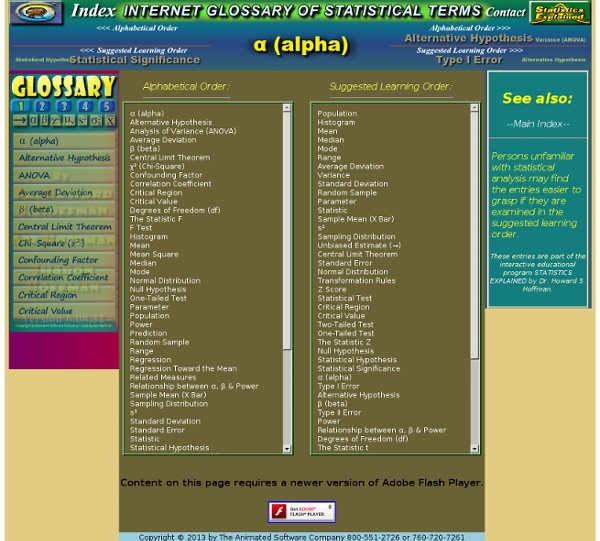 Introduction to the Scientific Method Introduction to the Scientific Method The scientific method is the process by which scientists, collectively and over time, endeavor to construct an accurate (that is, reliable, consistent and non-arbitrary) representation of the world. Recognizing that personal and cultural beliefs influence both our perceptions and our interpretations of natural phenomena, we aim through the use of standard procedures and criteria to minimize those influences when developing a theory. As a famous scientist once said, "Smart people (like smart lawyers) can come up with very good explanations for mistaken points of view." I. 1. 2. 3. 4. If the experiments bear out the hypothesis it may come to be regarded as a theory or law of nature (more on the concepts of hypothesis, model, theory and law below). II. As just stated, experimental tests may lead either to the confirmation of the hypothesis, or to the ruling out of the hypothesis. Error in experiments have several sources. III. IV. V. VI. VII. 1. 2. 3.

The Statistics Homepage "Thank you and thank you again for providing a complete, well-structured, and easy-to-understand online resource. Every other website or snobbish research paper has not deigned to explain things in words consisting of less than four syllables. I was tossed to and fro like a man holding on to a frail plank that he calls his determination until I came across your electronic textbook...You have cleared the air for me. You have enlightened. You have illuminated. — Mr. "As a professional medical statistician of some 40 years standing, I can unreservedly recommend this textbook as a resource for self-education, teaching and on-the-fly illustration of specific statistical methodology in one-to-one statistical consulting. — Mr. "Excellent book. — Dr. "Just wanted to congratulate whoever wrote the 'Experimental Design' page. — James A. Read More Testimonials >> StatSoft has freely provided the Electronic Statistics Textbook as a public service since 1995. Proper citation:

Statistical Graphics vs. InfoVis The current issue of the Statistical Computing and Graphics Newsletter features two invited articles, which both look at the “graphical display of quantitative data” – one from the perspective of statistical graphics, and one from the perspective of information visualization. Robert Kosara writes from an InfoVis view: Visualization: It’s More than Pictures! Information visualization is a field that has had trouble defining its boundaries, and that consequently is often misunderstood. It doesn’t help that InfoVis, as it is also known, produces pretty pictures that people like to look at and link to or send around. The key to understanding InfoVis is to ignore the images for a moment and focus on the part that is often lost: interaction. … read on in the Newsletter. Andrew Gelman and Antony Unwin write from an statistical graphics view: Visualization, Graphics, and Statistics Quantitative graphics, like statistics itself, is a young and immature field.

Time Series Analysi In the following topics, we will first review techniques used to identify patterns in time series data (such as smoothing and curve fitting techniques and autocorrelations), then we will introduce a general class of models that can be used to represent time series data and generate predictions (autoregressive and moving average models). Finally, we will review some simple but commonly used modeling and forecasting techniques based on linear regression. For more information see the topics below. General Introduction In the following topics, we will review techniques that are useful for analyzing time series data, that is, sequences of measurements that follow non-random orders. Detailed discussions of the methods described in this section can be found in Anderson (1976), Box and Jenkins (1976), Kendall (1984), Kendall and Ord (1990), Montgomery, Johnson, and Gardiner (1990), Pankratz (1983), Shumway (1988), Vandaele (1983), Walker (1991), and Wei (1989). Two Main Goals Trend Analysis Where:

Rulers Margin of Error and Confidence Levels Made Simple Pamela Hunter February 26, 2010 A survey is a valuable assessment tool in which a sample is selected and information from the sample can then be generalized to a larger population. Surveying has been likened to taste-testing soup – a few spoonfuls tell what the whole pot tastes like. The key to the validity of any survey is randomness. Just as the soup must be stirred in order for the few spoonfuls to represent the whole pot, when sampling a population, the group must be stirred before respondents are selected. How well the sample represents the population is gauged by two important statistics – the survey’s margin of error and confidence level. In other words, Company X surveys customers and finds that 50 percent of the respondents say its customer service is “very good.” Sample Size and the Margin of Error Margin of error – the plus or minus 3 percentage points in the above example – decreases as the sample size increases, but only to a point. Survey Data Is Imprecise

About us Role The National Audit Office (NAO) scrutinises public spending on behalf of Parliament. Our audit of central government has two main aims. The Audit and inspection rights are vested in the head of the National Audit Office, the Comptroller and Auditor General (C&AG). Independence The Comptroller and Auditor General, Amyas Morse, is an Officer of the House of Commons. Strategic Priorities Our work reveals recurring issues across different government departments and bodies, including three general areas where we have found that improvement is frequently needed. informed government, to encourage government to do more to base its decision-making on reliable, comprehensive and comparable information;financial management, to improve management of activities and to encourage the finance function in departments to make its full contribution; andimplementation, to encourage departments to understand better the key elements in the delivery cycle and what they cost. Other bodies

Brian.Shaler.name | Blog December 31, 2006 | Tags: digg, diggstatus, statistics, data, analysisThe Experiment Saturday, December 9th, I decided to run an experiment. The experiment was intended do several things: It needed to chronicle the Digg Effect. This has been done many times before, so I needed to come up with something that would provide more information than a typical traffic chart.I wanted to know more about the Digg community, and how most people use the site. There has been plenty of coverage of the Top Users, but nothing that really shows their stats in the context of the entire Digg user base.It needed to determine profitability of "blog spamming" by tracking the ad revenue of one Google AdSense advertisement while being linked to on the Digg.com front page. We have all seen people post a summary of a news story on their ad-invested blog and post the link to Digg. First, I had to build an web application that would scrape and cache user statistics from Digg.

Public Expenditure Statistical Analyses - HM Treasury PESA Objectives Public Expenditure Statistical Analyses (PESA) is the regular publication of information on government spending. PESA has two main objectives and is therefore based on two datasets: Budgets: To provide information on government spending plans and outturn expressed in terms of budgeting aggregates. PESA Publications The main annual PESA release comprises two separate documents: a National Statistics release of recent outturn data published on the HM Treasury website in late spring; and a PESA Command Paper published shortly after and consistent with the National Statistics release, which additionally includes estimated outturn for the latest year and spending plans for the rest of the Spending Review period. In addition to this: PESA 2010 Command Paper PESA 2010 was published on Thursday 1 July 2010. PESA 2010 Command Paper Consistency of PESAs Archived publications Related links Back to top

Mediation (David A. Kenny) Some might benefit from Muthén (2011). Note that both the CDE and the NDE would equal the regression slope or what was earlier called path c' if the model is linear, assumptions are met, and there is no XM interaction affecting Y, the NIE would equal ab, and the TE would equal ab + c'. In the case in which the specifications made by traditional mediation approach (e.g., linearity, no omitted variables, no XM interaction), the estimates would be the same. Here I give the general formulas for the NDE and NIE when X is an intervally measured based on Valeri & VanderWeele, (2013). and the intercept in the M equation can be denoted as iM. where X0 is a theoretical baseline score on X or a "zero" score and X1 is a theoretical "improvement" score on X or "1" score. When X is a dichotomy, it is fairly obvious what values to use for X0 and X1. References Baron, R. Bauer, D. Bolger, N., & Laurenceau, J. Bollen, K. Brewer, M., Campbell, D. Cohen, J. (1988). Cole, D. Edwards, J. Frazier, P. Fritz, M.