The Laws of Figure/Ground, Prägnanz, Closure, and Common Fate - Gestalt Principles (3) We’re now going to take a look at some more Gestalt principles, building on what we’ve learned in the first two articles. This third piece is particularly useful because having a good grasp of Figure/Ground, Prägnanz, Closure, and Common Fate will enhance your ability to design with more thoughtfulness, confident that you’re making the best use of some basic human tendencies to access your design and its impact. “The eye tends to build a relationship between elements, it fills in the gaps, and identifies hidden motion in the design.”

Figure/Ground, Prägnanz, Closure, and Common Fate are Gestalt Principles that help the eye build these relationships: The Figure/Ground law examines how the eye can separate shapes in a design from the background of that design. The Prägnanz law shows how our eyes can simplify complex shapes into simple shapes. This article is the third in the Gestalt series. So, for example, text on a page makes use of this law. Beginner UX courses starting soon. Laws of Proximity, Uniform Connectedness, and Continuation – Gestalt Principles (2) In this, the second part of our examining Gestalt principles, we’ll look at another Law – the Law of Proximity. 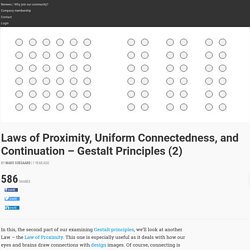 This one is especially useful as it deals with how our eyes and brains draw connections with design images. Of course, connecting is also important to us – that’s what we want to make happen between our users and our designs! “The eye tends to build a relationship between elements of the same design,” is a crucial saying to keep in mind.

Our brains build connections between disparate design elements based on laws of visual perception. These are influenced by the way in which elements in a design are laid out. This article is a follow-up to the first Gestalt principles article, in which we introduced and discussed the Law of Similarity. The Law of Similarity. Gestalt Principles (1) Gestalt is a German word that carries much importance, especially for us as designers. 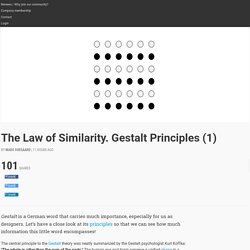 Let’s have a close look at its principles so that we can see how much information this little word encompasses! The central principle to the Gestalt theory was neatly summarized by the Gestalt psychologist Kurt Koffka: "The whole is other than the sum of the parts. " The human eye and brain perceive a unified shape in a different way to the way they perceive the individual parts of those shapes. This global whole is a separate entity that is not necessarily formed by the sum of its parts.

When we fully understand Gestalt design principles, we can utilize them to create more interesting and engaging visual experiences for website and app users. What Are Gestalt Principles? Author/Copyright holder: Impronta. Gestalt Principles. Gestalt Principles Gestalt is also known as the "Law of Simplicity" or the "Law of Pragnanz" (the entire figure or configuration), which states that every stimulus is perceived in its most simple form. 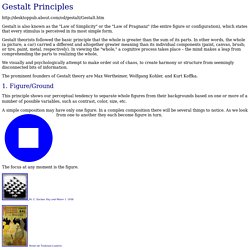 Gestalt theorists followed the basic principle that the whole is greater than the sum of its parts. In other words, the whole (a picture, a car) carried a different and altogether greater meaning than its individual components (paint, canvas, brush; or tire, paint, metal, respectively). In viewing the "whole," a cognitive process takes place – the mind makes a leap from comprehending the parts to realizing the whole, We visually and psychologically attempt to make order out of chaos, to create harmony or structure from seemingly disconnected bits of information.

The prominent founders of Gestalt theory are Max Wertheimer, Wolfgang Kohler, and Kurt Koffka. 1. A simple composition may have only one figure. The focus at any moment is the figure. Henri de Toulouse-Lautrec 3. Bill Brandt Thomas P. The Gestalt Principles. The Gestalt Principles Gestalt is a psychology term which means "unified whole". 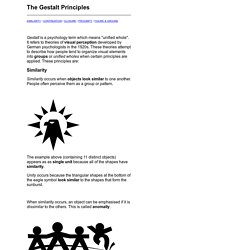 It refers to theories of visual perception developed by German psychologists in the 1920s. These theories attempt to describe how people tend to organize visual elements into groups or unified wholes when certain principles are applied. These principles are: Gestalt Theory of Visual Perception. Redirect Notice. View more. 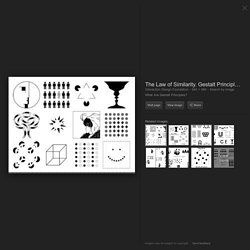