Book published and available now! Clarity or Aesthetics? Part 3 – Tips for Achieving Both. Data Visualization for Human Perception. Using data-viz to make a wire story stand out from the pack. I’ve been interested lately in finding examples of online-only, collaborative, non-profit newsrooms who’ve utilized the power of data visualization techniques to give added value to stories that otherwise wouldn’t necessarily be unique, and in doing so beat out legacy news organizations who published a text narrative alone. 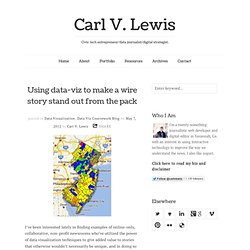 Take, for example, this data-rich story and interactive map displaying statewide testing results published by NJSpotlight Friday. While the news that only 8 out of 10 graduating seniors had passed New Jersey’s current standardized test in 2011 was widely reported across the state last week, including by the Star-Ledger in Newark and by The Press of Atlantic City, only NJSpotlight took advantage of the story’s strong data element to produce a more concise, data-driven visual narrative. 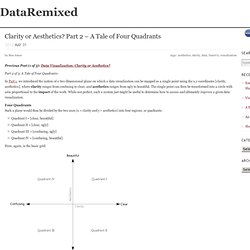 Part 2 of 3: A Tale of Four Quadrants: In Part 1, we introduced the notion of a two dimensional plane on which a data visualization can be mapped as a single point using the x,y coordinates [clarity, aesthetics], where clarity ranges from confusing to clear, and aesthetics ranges from ugly to beautiful. The single point can then be transformed into a circle with area proportional to the impact of the work. While not perfect, such a system just might be useful to determine how to assess and ultimately improve a given data visualization. 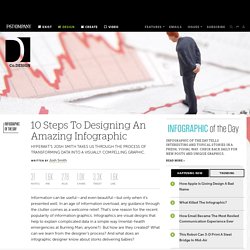 In an age of information overload, any guidance through the clutter comes as a welcome relief. That’s one reason for the recent popularity of information graphics. Infographics are visual designs that help to explain complicated data in a simple way (mental-health emergencies at Burning Man, anyone?). Article: The 8 hats of data visualisation design. Last week I posted a slideshare version of my slides from a recent pair of presentation events in Chicago. 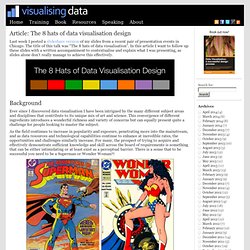 The title of this talk was “The 8 hats of data visualisation”. In this article I want to follow up these slides with a written accompaniment to contextualise and explain what I was presenting, as slides alone don’t really manage to achieve this effectively. Ever since I discovered data visualisation I have been intrigued by the many different subject areas and disciplines that contribute to its unique mix of art and science. This convergence of different ingredients introduces a wonderful richness and variety of concerns but can equally present quite a challenge for people looking to master the subject. As the field continues to increase in popularity and exposure, penetrating more into the mainstream, and as data resources and technological capabilities continue to enhance at incredible rates, the opportunities and challenges similarly increase. 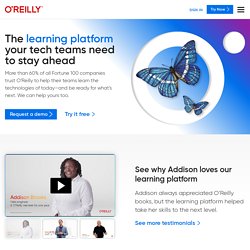 If you're ready to plunge into the world of data, the Starter Kit provides the comprehensive introduction you're looking for. Buy any two titles and get the 3rd Free with discount code: OPC10 Or, get them all for $209.20 (60% savings) 7 Essential Books on Data Visualization & Computational Art. By Maria Popova What 12 million human emotions have to do with civilian air traffic and the order of the universe. 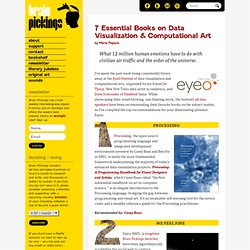 I’ve spent the past week being consistently blown away at the EyeO Festival of data visualization and computational arts, organized by my friend Jer Thorp, New York Times data artist in residence, and Dave Schroeder of Flashbelt fame. While showcasing their mind-blowing, eye-blasting work, the festival’s all-star speakers have been recommending their favorite books on the subject matter, so I’ve compiled the top recommendations for your illuminating pleasure.

Conspire Tips. Flowing Data. Which Visualization Type Should I Use? Ever spend several hours putting together what you think is a killer presentation, only to step back and realize that your visuals aren’t quite cutting it? That was me this weekend. There I was working on, what I thought was a killer project when my friend came in and said how my charts just really sucked. They were too complex and actually ended up taking away from the project instead of helping it. 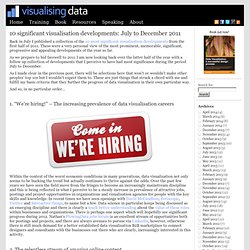 These were a very personal view of the most prominent, memorable, significant, progressive and appealing developments of the year so far. As we prepare to bid farewell to 2011 I am now looking back over the latter half of the year with a follow up collection of developments that I perceive to have had most significance during the period July to December. As I made clear in the previous post, there will be selections here that won’t or wouldn’t make other peoples’ top 10s but I wouldn’t expect them to. Visualising Data. An Information Visualization Exercise. Want to play a game with The Dashboard Spy and Information Visualization expert Stephen Few? 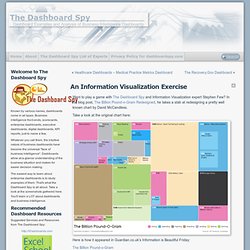 In his blog post, The Billion Pound-o-Gram Redesigned, he takes a stab at redesigning a pretty well known chart by David McCandless. Take a look at the original chart here: Here is how it appeared in Guardian.co.uk’s Information is Beautiful Friday: The Billion Pound-o-Gram 289 billion spent on this. 400 billion spent on that. Paper: Privacy-Preserving Visualization. The point of visualization is usually to reveal as much of the structure of a dataset as possible. 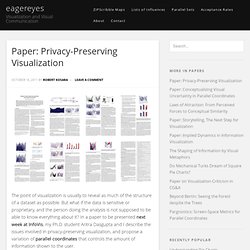 But what if the data is sensitive or proprietary, and the person doing the analysis is not supposed to be able to know everything about it? In a paper to be presented next week at InfoVis, my Ph.D. student Aritra Dasgupta and I describe the issues involved in privacy-preserving visualization, and propose a variation of parallel coordinates that controls the amount of information shown to the user. Naive Approaches As with everything else, there is an obvious solution to this problem that doesn’t work. We started out by looking at the data mining literature, where preserving privacy has been an issue for a while. While this is obviously useless for visualization, this is the way the data can be passed on to third parties without knowledge about what they are going to do with it, while guaranteeing a minimum level of privacy. Newsletter. ASA Statistics Computing and Graphics. 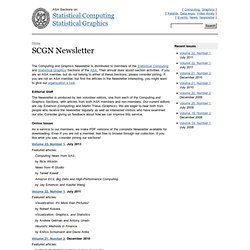 Their annual dues assist section activities. If you are an ASA member, but do not belong to either of these Sections, please consider joining. If you are not an ASA member, but find the articles in the Newsletter interesting, you might want to give our organization a look. Editorial Staff The Newsletter is produced by two volunteer editors, one from each of the Computing and Graphics Sections, with articles from both ASA members and non-members. Online Issues. Statistical Graphics and more » Blog Archive » Statistical Graphics vs. InfoVis. The current issue of the Statistical Computing and Graphics Newsletter features two invited articles, which both look at the “graphical display of quantitative data” – one from the perspective of statistical graphics, and one from the perspective of information visualization.

Robert Kosara writes from an InfoVis view: Visualization: It’s More than Pictures! Information visualization is a field that has had trouble defining its boundaries, and that consequently is often misunderstood. It doesn’t help that InfoVis, as it is also known, produces pretty pictures that people like to look at and link to or send around. Data visualisation: in defence of bad graphics. How to create a terrible visualization. The last couple of visualizations I've done have been complete flops, at least in terms of traffic. A geeky post about my profiling habits got more visitors than a shiny 3D globe! It's never fun to confront it but as Bob Sutton says; 'failure sucks but instructs'. In that spirit, here's what I learned about how to create an unpopular visualization: Tell lots of stories at once. 2011W MAT259 - Visualizing Information. Report Builder 3.0 – Chart Types, Visualizations, and Properties. Report Builder 3.0 – Chart Types, Visualizations, and Properties by Jes Borland on March 8, 2012 in category Database Programming Microsoft SQL Server SSRS.

The main objective of the ISLP is to contribute to promoting statistical literacy across the world, among young and adults, in all walks of life. To this end, we provide an online repository of international resources and news in Statistical Literacy, international activities to promote the resources and the individuals and institutions behind them, and outreach activities to increase awareness.

Contact the IASE Executive➶ or the ISLP Director Reija Helenius➶ by e-mail if you have any questions. A Case Study In How Infographics Can Bend The Truth. Creating your own data visualisations. At the NCVO Annual Conference on Monday I went to the workshop on visualising data. Visualization series: Insight from Cleveland and Tufte on plotting numeric data by groups. After my post on making dotplots with concise code using plyr and ggplot, I got an email from my dad who practices immigration law and runs a website with a variety of immigration resources and tools.