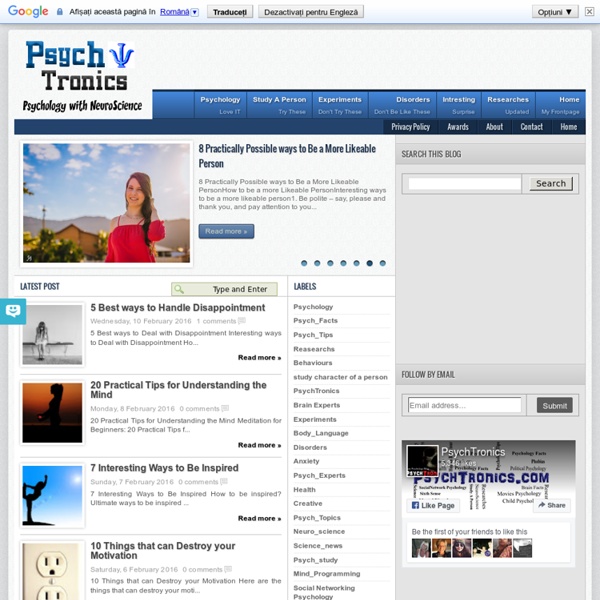 Empathic people are natural targets for sociopaths - protect yourself © Fotolia Olly The empathy trap: therapists and counselors almost by definition are empathic, to facilitate clients' recovery - but this quality can mean those carers are targets for sociopaths, aided by what Dr Jane & Tim McGregor call "apaths". The first UK article on this cruel sport shows how to identify and thus avoid it. People targeted by a sociopath often respond with self-deprecating comments like "I was stupid", "what was I thinking" of "I should've listened to my gut instinct". But being involved with a sociopath is like being brainwashed. The sociopath's superficial charm is usually the means by which s/he conditions people.

New evidence shows how chronic stress predisposes brain to mental disorders (Medical Xpress)—University of California, Berkeley, researchers have shown that chronic stress generates long-term changes in the brain that may explain why people suffering chronic stress are prone to mental problems such as anxiety and mood disorders later in life. Their findings could lead to new therapies to reduce the risk of developing mental illness after stressful events. Doctors know that people with stress-related illnesses, such as post-traumatic stress disorder (PTSD), have abnormalities in the brain, including differences in the amount of gray matter versus white matter. Gray matter consists mostly of cells – neurons, which store and process information, and support cells called glia – while white matter is comprised of axons, which create a network of fibers that interconnect neurons.

Hive minds: Time to drop the fiction of individuality - opinion - 08 April 2014 FOR most of Western history, truth and morality came from God and king, and free will was a theological question. This began to change in the 1700s, and the idea that humans were individuals with the freedom of rational choice soon wormed its way into the belief systems of the upper echelons of society. Over time, the concepts of rationality and individualism profoundly shaped the governments and culture of the West. But to what extent are we freethinking individuals? Future - How human culture influences our genetics You shouldn't be able to drink milk. Your ancestors couldn't. It is only in the last 9,000 years that human adults have gained that ability without becoming ill. Children could manage it, but it was only when we turned to dairy farming that adults acquired the ability to properly digest milk.

Lasting Relationships Rely On 2 Traits Gottman wanted to know more about how the masters created that culture of love and intimacy, and how the disasters squashed it. In a follow-up study in 1990, he designed a lab on the University of Washington campus to look like a beautiful bed-and-breakfast retreat. He invited 130 newlywed couples to spend the day at this retreat and watched them as they did what couples normally do on vacation: cook, clean, listen to music, eat, chat, and hang out. And Gottman made a crucial discovery in this study—one that gets at the heart of why some relationships thrive while others languish. Throughout the day, partners would make requests for connection, what Gottman calls “bids.” For example, say that the husband is a bird enthusiast and notices a goldfinch fly across the yard.

Money Makes You Less Rational Than You Think Kinja is in read-only mode. We are working to restore service. Two year ago, Berkeley researchers showed that people who drive expensive vehicles are four times more likely to cut off drivers of lower status vehicles. The researchers concluded that higher social class can predict increased unethical behavior.

m.fastcompany If you Google “morning routine,” you’ll receive more than 24 million search results, and for good reason: Early risers seem to get more done and live happier lives. Some of the most successful entrepreneurs understand the benefits of having an early-morning routine: Starbucks’s Howard Schultz, GE’s Jeff Immelt, and Xerox’s Ursula Burns are just some of the early birds famous for rising before 6 a.m. to get ahead on their work. But a morning routine is only half of a productive day; the other is the evening routine that precedes it. Here are seven evening routines of famous and successful creatives, and how you can apply them to your own life. Swedish Director Ingmar Bergman Read Before Bed “Do you know what moviemaking is?

Related:
Related:  psychology & behaviour   -  Behaviour Guidance   -  Information behaviour   -  Consumer buying behaviour   -  Animal Behaviour--Dog Body Language   -  Behaviour Based Test   -  US voting behaviour   -  UK Voting behaviour   -  Buying Behaviour   -  Risk Taking Behaviour   -  Consumer Behaviour   -  classroom and behaviour   -  Laurie Santos: A monkey economy as irrational as ours | Video on TED.com   -  Highly Accurate Personality Test by Learnmyself   -  RationalWiki   -  Conformity - YouTube   -  Dr Paul Howard Jones - What is the Internet Doing to our Brains? - YouTube   -  Mintel Oxygen: Consumer market analysis | Mintel.com   -  The Behavioral Sink   -  How Life Works   -  Inside the mind of the octopus | Orion Magazine   -  Welcome   -  How to Learn Anything Faster With the Feynman Technique   -  Lateral Thinking Puzzles - Preconceptions   -  How to suck at your religion   -  The Science of Lucid Dreaming and How to Learn to Control Your Dreams, Animated | Brain Pickings   -  Scope and Sequence | Common Sense Media   -  Love the Grows: Questions You Should Ask Before Marriage   -  Business Startup: How to Start a Business With Limited Funds   -  ClassDojo   -  12 Ways To Integrate (Not Just Use) Technology In Education   -  Digital Citizenship Flashcards | A Platform for Good   -  7 Social Hacks For Manipulating People   -  Six Funny Life Lessons | Carl Pei   -  30 traits of an Empath (How to know if you’re an Empath)   -  Fitch   -  What is Addiction? [Gabor Maté] - YouTube   -  The Best 10 Motivational Videos For 2013 - MotivationGrid   -  10 Painfully Obvious Truths Everyone Forgets Too Soon