Inside the mind of the octopus 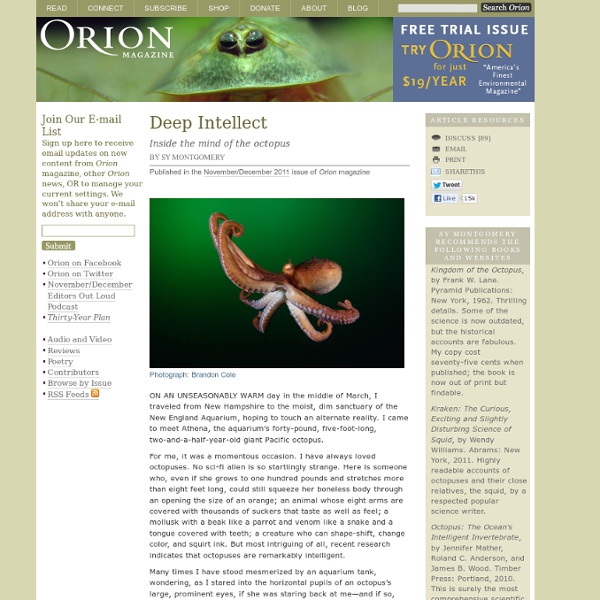 Inside the mind of the octopus by Sy Montgomery Photograph: Brandon Cole ON AN UNSEASONABLY WARM day in the middle of March, I traveled from New Hampshire to the moist, dim sanctuary of the New England Aquarium, hoping to touch an alternate reality. I came to meet Athena, the aquarium’s forty-pound, five-foot-long, two-and-a-half-year-old giant Pacific octopus. For me, it was a momentous occasion. Many times I have stood mesmerized by an aquarium tank, wondering, as I stared into the horizontal pupils of an octopus’s large, prominent eyes, if she was staring back at me—and if so, what was she thinking? Not long ago, a question like this would have seemed foolish, if not crazy. Only recently have scientists accorded chimpanzees, so closely related to humans we can share blood transfusions, the dignity of having a mind. I had always longed to meet an octopus. The moment the lid was off, we reached for each other. Occasionally an octopus takes a dislike to someone. Then there was Wendy.

Retake the Net YouTube Unveils Original Content Channels in Challenge to TV Royal Society ‘aged’ back catalog free, permanently Yay! There’s going to be some happy science historians, including amateur ones. (And just plain ol‘ scientists, too.) Readers who have followed this blog for some time, might recall me writing about the Royal Society of London opening it’s full collection for a period in 2010. The Royal Society website has now announced that the back catalog for work older than 70 yeas old is open to anyone, free of cost, permanently. Great stuff. The opening of this ‘aged’ portion of the archive is timed to coincide with Open Access Week, promoting promoting Open Access scholarship and research. There are gems to be found if you hunt around, including works by some of the giants of science. I can recommended exploring the early editions of the Philsophical Transactions, the oldest scientific publication – dating from 1665. While you can search the archive, in many ways I prefer to just browse. Other articles on Code for life: 137 years of Popular Science back issues, free Royal science

Modern Algorithms Crack 18th Century Secret Code | Wired Science By Mark Brown, Wired UK Computer scientists from Sweden and the United States have applied modern-day, statistical translation techniques — the sort of which are used in Google Translate — to decode a 250-year-old secret message. [partner id="wireduk" align="right"]The original document, nicknamed the Copiale Cipher, was written in the late 18th century and found in the East Berlin Academy after the Cold War. It’s since been kept in a private collection, and the 105-page, slightly yellowed tome has withheld its secrets ever since. But this year, University of Southern California Viterbi School of Engineering computer scientist Kevin Knight — an expert in translation, not so much in cryptography — and colleagues Beáta Megyesi and Christiane Schaefer of Uppsala University in Sweden, tracked down the document, transcribed a machine-readable version and set to work cracking the centuries-old code. The team realised that the known characters were just there to mislead. Source: Wired UK See Also:

Nanotube springs make skin-like sensor Researchers at Stanford University in the US have discovered a type of highly elastic, transparent thin film that conducts electricity extremely well. The film is made of wavy, spring-like carbon nanotubes and could be used as the electrode material in "skin-like" pressure and stretch sensors. Such devices might one day be used to help restore touch and pressure sensitivity to amputees, injured soldiers and burn victims, and also find applications in robotics and touch-sensitive computer displays, says the team. Zhenan Bao and colleagues made their transparent elastic films by airbrushing a solution of carbon nanotubes onto the top and bottom surface of a flat silicone sheet. In fact, the set-up behaves like a capacitor, with the silicone layer storing electrical charge, as a battery does. When the composite film is stretched again, the nanotubes straighten out in the direction they are stretched. Other applications

Science Tattoo Emporium | The Loom A fair number of scientists like to get a tattoo to celebrate their research. Ryan Carney, a biologist at Brown University has taken the practice one step further. He’s gotten a tattoo that shows the key finding of a paper he and his colleagues have just published today. They studied a fossil feather from Archaeopteryx, the iconic bird (or almost-bird). They conclude it looked just like this tattoo. Carney collaborated on the research with a team of scientists who have developed a method to reconstruct colors from fossils. As I wrote in the New York Times in 2009, the scientists first found melanosomes in the ink sac of a fossil squid and then went on to look at a 47-million-year-old bird feather. No examination of feather evolution would be complete, of course, without Archaeopteryx. The first fossil of Archaeopteryx was a single feather–the one that Carney has turned into a tattoo. The fossil was so extraordinary that Von Meyer wondered if some forger had etched it. Darwin agreed.

octopus challenes our understanding of consciousness itself by electronics Nov 3