The Voters Abandoned by the Court. How Trump Won. As a few observant readers have noted, one thing that has been missing entirely from this series is race. 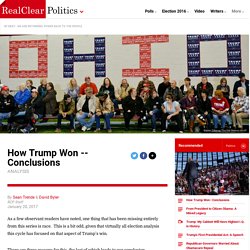 This is a bit odd, given that virtually all election analysis this cycle has focused on that aspect of Trump’s win. There are three reasons for this, the last of which leads to our conclusion. First, it’s been done. A lot. In fact, the lead writer here has probably written well over 100,000 words on demographic analysis. Second, the impact of demographics is often overstated. Also in this series: Part 1: The South Part 2: The West Part 3: The Northeast Part 4: The Midwest Finally, we come to our overall conclusion for the series: These demographic changes are meaningless without a geographic filter. As the lead author noted two years ago in his chapter for Larry Sabato’s “The Surge,” Hispanics exceed their national share of the population in just nine states, only three of which are swing states (Colorado, Florida and Nevada). Today, we look at this from a national perspective.

Getting out the vote

Eight real US electoral college maps that now look like science fiction. Over the last few years, those of us who spend every fourth autumn repeatedly clicking refresh on FiveThirtyEight have grown very familiar with a particular map of the US. 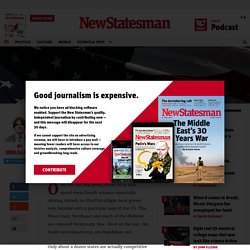 The West Coast, Northeast and much of the Midwest are coloured Democratic blue. Most of the rest, the South and inland west, are Republican red. Only about a dozen states are actually competitive in presidential elections. And, since winning a state's popular vote generally means winning all its votes in the electoral college, the result is that we're all going to spend the next three months obsessing about Florida and Ohio. A summary of the last four presidential elections. We've all got so used to this map that it's easy to lose sight of quite how recent a phenomenon it is. Until George W Bush appeared on the scene, presidential electoral maps were a lot less predictable.

And this is 1992: There's been much excitement about polls this year which suggest Hillary Clinton might win a red state like Georgia or Arizona. White Christian America is dying. Robert P. 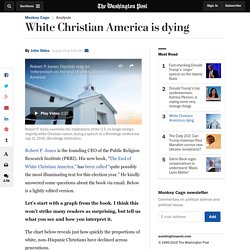 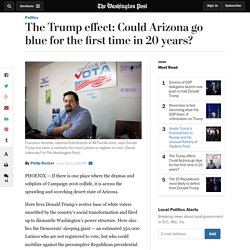 Here lives Donald Trump’s restive base of white voters unsettled by the country’s social transformation and fired up to dismantle Washington’s power structure. Here also lies the Democrats’ sleeping giant — an estimated 350,000 Latinos who are not registered to vote, but who could mobilize against the presumptive Republican presidential nominee over his incendiary rhetoric. Then there are the politicians. One senator, Jeff Flake (R), is a vocal Trump critic sounding the alarm about an electoral wipeout.

The other, John McCain (R), alternates awkwardly between his maverick persona and a Trump apologist as he navigates an unexpectedly difficult reelection race. “Everything that needs to happen on the ground is happening,” said Fred DuVal, a longtime Democratic power broker here.

The current realignment of US politics means that the outcome in November could be anyone’s guess. May has been a pivotal month in the US presidential election; it has seen the continued success of Donald Trump in the Republican Party’s presidential primary, and his ascension to become the party’s likely presidential nominee. 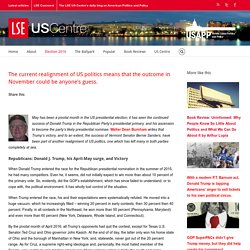 Walter Dean Burnham writes that Trump’s victory, and to an extent, the success of Vermont Senator Bernie Sanders, have been part of another realignment of US politics, one which has left many in both parties completely at sea. Republicans: Donald J. Trump, his April-May surge, and Victory When Donald Trump entered the race for the Republican presidential nomination in the summer of 2015, he had many competitors. Even he, it seems, did not initially expect to win more than about 10 percent of the primary vote. When Trump entered the race, his and their expectations were systematically refuted. Here’s why Hillary Clinton just said Bernie Sanders might not be a Democrat. In an interview with Politico that published Wednesday morning, Hillary Clinton offers a direct critique of Bernie Sanders that's usually lurking under the surface. 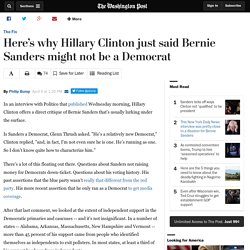 Is Sanders a Democrat, Glenn Thrush asked. "He's a relatively new Democrat," Clinton replied, "and, in fact, I'm not even sure he is one. He's running as one. So I don't know quite how to characterize him. " There's a lot of this floating out there. After that last comment, we looked at the extent of independent support in the Democratic primaries and caucuses -- and it's not insignificant.

Bernie Sanders won Wisconsin by about 13 points -- but he and Clinton tied among Democrats. How party ID became partisan — and why it shouldn’t be. After the release of any -- and every -- swing state or national poll these days, the Fix Twitter feed and email inbox immediately fill up with messages that are some variation on this: "Party ID skewed! 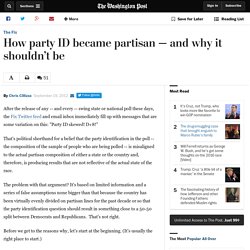 D+8! " That's political shorthand for a belief that the party identification in the poll -- the composition of the sample of people who are being polled -- is misaligned to the actual partisan composition of either a state or the country and, therefore, is producing results that are not reflective of the actual state of the race. The problem with that argument? It's based on limited information and a series of false assumptions none bigger than that because the country has been virtually evenly divided on partisan lines for the past decade or so that the party identification question should result in something close to a 50-50 split between Democrats and Republicans. How you win a GOP primary. The 2012 Republican convention. 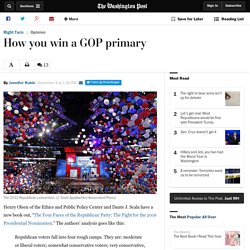