Explanation: How Brain Training Can Make You Significantly Smarter 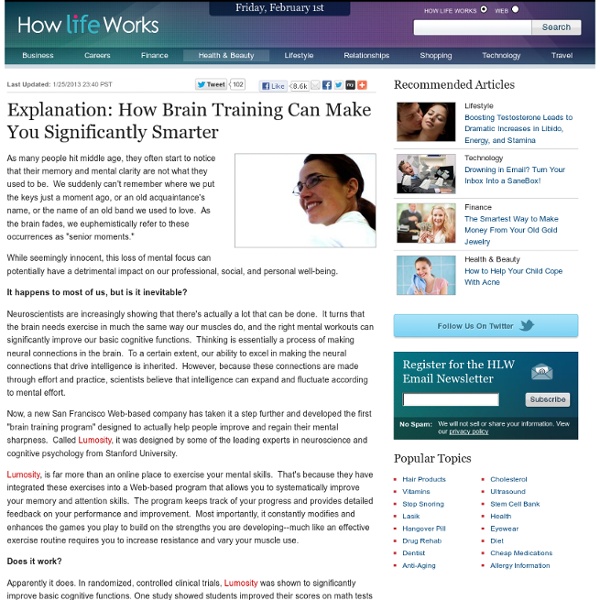 Empathic people are natural targets for sociopaths - protect yourself © Fotolia Olly The empathy trap: therapists and counselors almost by definition are empathic, to facilitate clients' recovery - but this quality can mean those carers are targets for sociopaths, aided by what Dr Jane & Tim McGregor call "apaths". The first UK article on this cruel sport shows how to identify and thus avoid it.

25 clever ideas to make life easier - StumbleUpon Via: amy-newnostalgia.blogspot.com Why didn’t I think of that?! We guarantee you’ll be uttering those words more than once at these ingenious little tips, tricks and ideas that solve everyday problems … some you never knew you had! (Above: hull strawberries easily using a straw). Via: apartmenttherapy.com Rubbing a walnut over scratches in your furniture will disguise dings and scrapes. Via: unplggd.com

The science behind memory glitches Deja vu Each lived moment usually feels unique. But about two-thirds of us occasionally experience the fleeting sensation that life is on repeat. It's as if we've been in exactly the same place having exactly the same experience before, even though we know that's an impossibility. Known as deja vu (literally "already seen"), an early explanation was that the feeling arises from a delayed signal arriving from one of the eyes after a scene has already been processed by the brain.

Project for the New American Century The Project for the New American Century (PNAC) was an American think tank based in Washington, D.C. established in 1997 as a non-profit educational organization founded by William Kristol and Robert Kagan. The PNAC's stated goal is "to promote American global leadership."[1] Fundamental to the PNAC were the view that "American leadership is both good for America and good for the world" and support for "a Reaganite policy of military strength and moral clarity. New evidence shows how chronic stress predisposes brain to mental disorders (Medical Xpress)—University of California, Berkeley, researchers have shown that chronic stress generates long-term changes in the brain that may explain why people suffering chronic stress are prone to mental problems such as anxiety and mood disorders later in life. Their findings could lead to new therapies to reduce the risk of developing mental illness after stressful events. Doctors know that people with stress-related illnesses, such as post-traumatic stress disorder (PTSD), have abnormalities in the brain, including differences in the amount of gray matter versus white matter. Gray matter consists mostly of cells – neurons, which store and process information, and support cells called glia – while white matter is comprised of axons, which create a network of fibers that interconnect neurons. White matter gets its name from the white, fatty myelin sheath that surrounds the axons and speeds the flow of electrical signals from cell to cell.

DIY Sugar&Wax - BEAUTY WOO ME - beauty tips, cosmetics makeup, lipstick, beauty blogs {Image from this etsy shop where you can buy sugar wax if you don't want to make it. We are not affiliated. I just like the way they look. The Neuroscience of Looking on the Bright Side Ask a bride before walking down the aisle “How likely are you to get divorced?” and most will respond “Not a chance!” Tell her that the average divorce rate is close to 50 percent, and ask again. Would she change her mind? SCHOPENHAUER'S 38 STRATAGEMS, OR 38 WAYS TO WIN AN ARGUMENT Arthur Schopenhauer (1788-1860), was a brilliant German philosopher. These 38 Stratagems are excerpts from "The Art of Controversy", first translated into English and published in 1896. Carry your opponent's proposition beyond its natural limits; exaggerate it. The more general your opponent's statement becomes, the more objections you can find against it. The more restricted and narrow his or her propositions remain, the easier they are to defend by him or her.

Hive minds: Time to drop the fiction of individuality - opinion - 08 April 2014 FOR most of Western history, truth and morality came from God and king, and free will was a theological question. This began to change in the 1700s, and the idea that humans were individuals with the freedom of rational choice soon wormed its way into the belief systems of the upper echelons of society. Over time, the concepts of rationality and individualism profoundly shaped the governments and culture of the West. But to what extent are we freethinking individuals? The question matters because economics and much of cognitive science have, at their basis, the concept of an independent individual.