How to suck at your religion 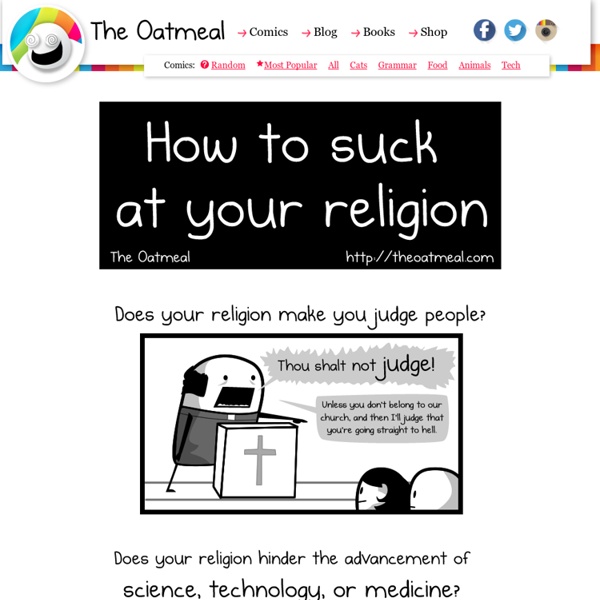 36 questions to get to know yourself better - imperfections and all. 36 questions to get to know yourself better Earlier this year The New York Times published a list of 36 questions written by psychologist Arthur Aron that new couples or acquaintances can ask each other if they want to fast-track their relationship (or break up, depending on what’s revealed). We wanted to create a similar questionnaire but have the focus be on self-discovery, so we turned to two psychologists who specialize in studying the self: Gary Lewandowski, Ph.D., a professor at Monmouth University in New Jersey, and Brent Mattingly, Ph.D., an assistant professor at Ursinus College in Pennsylvania. They created the questions based on psychological theories and research. The professors recommend that you consider each question carefully and write down your answers to get the most out of the quiz.

‘Free Will,’ by Sam Harris But the last half-century has seen this ancient subject pulled down from its academic perch and into courtrooms, laboratories, real-world questions about moral responsibility, and even popular culture. (It forms the plot of such contemporary movies as “Minority Report” and “The Adjustment Bureau.”) Over the last few decades, procedures for measuring, imaging and analyzing mental processes have grown in number and subtlety. During this same period, books for the general reader about the brain and its functions, consciousness and will, thought and reasoning have proliferated. We have Daniel Dennett, Steven Pinker, Richard Dawkins, Cordelia Fine, Oliver Sacks, Michael Gazzaniga, Daniel Kahneman and scores of others explaining, and extrapolating from, new findings in neuroscience and almost always addressing the matter of free will. (Daniel Wegner’s “Illusion of Conscious Will,” published by the MIT Press in 2002, is a central full-length scientific text about this subject.)

Finally, the Hip Hop Kids Are Taking Acid The Flatbush Zombies: Meechy Darko (left) and Zombie Juice (right). Photo by Conor Lamb. The Flatbush Zombies' whole crew is sleeping the day away when I enter their crash pad somewhere in Brooklyn. An Atheist Manifesto Update: (2/08/2006 1:35 p.m. EST) Read Sam Harris’ additional arguments about The Reality of Islam Editor’s Note: At a time when fundamentalist religion has an unparalleled influence in the highest government levels in the United States, and religion-based terror dominates the world stage, Sam Harris argues that progressive tolerance of faith-based unreason is as great a menace as religion itself. Husband banned from Target Husband banned from Target After I retired, my wife insisted that I accompany her on her trips to Target. Unfortunately, like most men, I found shopping boring and preferred to get in and get out. Equally unfortunate, my wife is like most women - she loves to browse. Yesterday my dear wife received the following letter from our local Target. Dear Mrs.

23 Ways To Treat Yo' Self Without Buying Or Eating Anything - Yes and Yes Here are some ‘treats’ that I regularly give myself because I ‘deserve’ them: * An entire block of Parmesan. Not on something, mind you. A Catholic Reply to “How to Suck At Your Religion” An anti-religious (and specifically, anti-Catholic) webcomic is making the rounds on the Internet right now. It’s part of a webcomic called The Oatmeal, and is called “How to suck at your religion.” I have to warn anyone clicking that link that it’s really offensive: profane, lewd, and blasphemous, all at once. Honestly, if you don’t have some reason to read it, just go ahead and skip it (and this whole post).

Relativistic Baseball What would happen if you tried to hit a baseball pitched at 90% the speed of light? - Ellen McManis Let’s set aside the question of how we got the baseball moving that fast. We'll suppose it's a normal pitch, except in the instant the pitcher releases the ball, it magically accelerates to 0.9c. From that point onward, everything proceeds according to normal physics Atheism Atheism is, in a broad sense, the rejection of belief in the existence of deities.[1][2] In a narrower sense, atheism is specifically the position that there are no deities.[3][4][5] Most inclusively, atheism is the absence of belief that any deities exist.[4][5][6][7] Atheism is contrasted with theism,[8][9] which, in its most general form, is the belief that at least one deity exists.[9][10][11] The term "atheism" originated from the Greek ἄθεος (atheos), meaning "without god(s)", used as a pejorative term applied to those thought to reject the gods worshiped by the larger society.[12] With the spread of freethought, skeptical inquiry, and subsequent increase in criticism of religion, application of the term narrowed in scope. The first individuals to identify themselves using the word "atheist" lived in the 18th century during the Age of Enlightenment. Arguments for atheism range from the philosophical to social and historical approaches. Definitions and distinctions Range

Still life: Bent objects & OWNI.eu, News, Augmented - StumbleUpon UPDATE: The Return of Bent Objects Wires transform these objects from inanimate to hilarious works of art. Little polish girl McDonalds as Sculpture Materials Yeah, this is where those come from Imagining your future projects is holding you back. Do you have a big creative project in store? Do you lie awake sometimes, thinking about what might go into it, what the characters or environment might look like, how it will touch the audience in a whole new way? Do you imagine what it will feel like to have this project under your belt, and what kind of effect it will have on your life? Let me tell you about Forest Lords. Forest Lords is a series of ten fantasy novels, each a 1000-page brick, about the epic adventures of Greenleaf Barksley, elf proletarian, and his journeys to attain the Golden Leaf and save his homeland from the scourge of the Curse of the Titaness Denox. The thing is, none of this series exists—not even Forest Lords Volume One: The Elven Soul.

Orfeo: A Dialog between Robert Hunter and Terence McKenna This is Part OnePart TwoPart ThreePart FourPart Five (current) Terence, in reading your books I was struck with how closely your DMT experiments paralleled my own. I wasn't surprised by the confirmation, as you might guess. I considered myself a serious DMT explorer between 1967-69. I stopped only because I was told to, in no uncertain terms, by the Boss of that place. Three times, in fact, to my dismay.