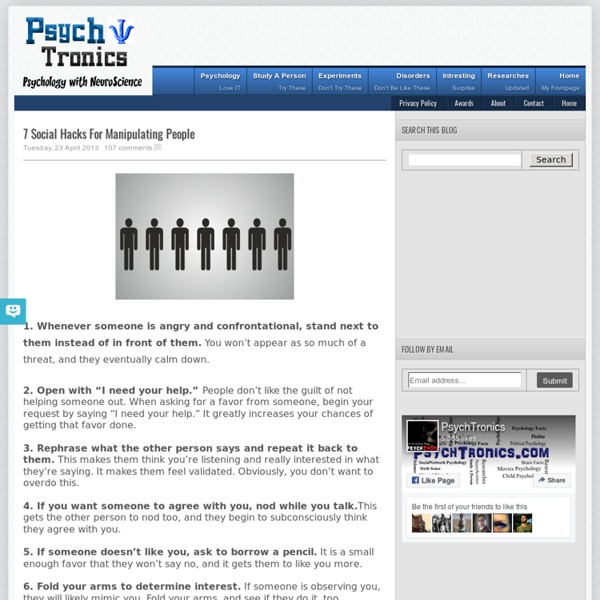 1. Whenever someone is angry and confrontational, stand next to them instead of in front of them. You won’t appear as so much of a threat, and they eventually calm down. 2. Open with “I need your help.” People don’t like the guilt of not helping someone out. 3. 4. 5. 6.

How to Approach Anyone with the 3 Second Rule If you’re visiting from StumbleUpon and like this article, don’t forget to give it a thumbs up! Have you ever seen a really hot girl and wanted to talk to her, but couldn’t figure out what to say? Or have you ever walked into a room full of strangers, and felt extremely uncomfortable? Maybe even pulled out your phone and pretended to be texting, hoping someone would come up to you and save you from your awkwardness? We all have. 15 Things That Emotionally Strong People Don't Do There is a particular aspect of mental strength that is the deciding factor of whether or not you will have a good life. There are many levels to mental strength and all are needed to be successful and happy. The one particular area of mental strength that has the greatest impact is that of emotional strength. Emotions are, of course, a part of our psyche, yet nevertheless, can be distinguished from the remainder of mental qualities because they most directly influence our physical body. They affect the way our body functions and they drive every single one of our actions. Without emotion, we would have no reason to act, to do anything with ourselves.

True Secret to Success: Gratitude I'm utterly convinced that the key to lifelong success is the regular exercise of a single emotional muscle: gratitude. People who approach life with a sense of gratitude are constantly aware of what's wonderful in their life. Because they enjoy the fruits of their successes, they seek out more success. And when things don't go as planned, people who are grateful can put failure into perspective.

The Benefits of Top-Down Thinking & Why it is Critical to Entrepreneurs For the first 5 years of my career I was a “bottom up” thinker and worker. I assembled tons of data, grouped things, found results and drew conclusions. It was difficult to make the transition to a “top down” thinker but as a senior executive – and as an entrepreneur – you’re far less effective without this skill in your arsenal. 10 Things You Need To Do To Be A Gentleman In our world, the word ‘gentleman’ can mean many things. It can mean a generic man, or a solid, dependable guy, or it can be a cloying word for the halcyon men of 1950s advertisements. Let’s face it, in the 21st century, gentlemen are becoming harder and harder to find. Or perhaps the definition of what makes a gentleman a gentleman is changing and evolving with the times, rather than remaining rooted in older principles and traditions. So what makes a gentleman?

60 of the world's happiest facts 1. A group of flamingos is called a flamboyance. 2. If you fake laugh long enough you’ll start to really laugh, really, really hard. 10 Psychology Tricks You Can Use To Influence People Before we get started, it’s important to note that none of these methods fall under what we would term the dark arts of influencing people. Anything that might be harmful to someone in any way, especially to their self esteem, is not included here. These are ways to win friends and influence people using psychology without being a jerk or making someone feel bad. Trick: Get someone to do a favor for you—also known as the Benjamin Franklin effect. Legend has it that Benjamin Franklin once wanted to win over a man who didn’t like him. He asked the man to lend him a rare book and when the book was received he thanked him graciously.

The 13 Best Science and Technology Books of 2013 by Maria Popova The wonders of the gut, why our brains are wired to be social, what poetry and math have in common, swarm intelligence vs. “God,” and more. On the heels of the year’s best reads in psychology and philosophy, art and design, history and biography, and children’s books, the season’s subjective selection of best-of reading lists continues with the finest science and technology books of 2013. (For more timeless stimulation, revisit the selections for 2012 and 2011.) The Best 10 Motivational Videos For 2013 Once in a while a video comes along that is powerful enough to transcend language barriers and speak directly to our soul. That’s why today I’ve decided to do a list with the motivational videos that had great impact on me and have served me as a motivational source almost on a daily basis. Dream – Mateusz M Key Quote: Most people they raise a family, they earn a living and then they die. They stop growing, they stop working on themselves, they stop stretching, they stop pushing themselves. If today were the last day of my life – by Steve Jobs

Starting Today You Can Be the Happiest Person If You Pick Up These Habits I think of myself as the happiest person whenever I walk into a room, and most people notice my smile right away. Here are 20 ways you can find yourself as happy as I am. 1. Let it go. When someone criticizes you or says something not-so-nice, just forget it. 25 Things You Keep In Your Life That Are Only Holding You Back 1. The phone numbers of people that never, ever call you or text you first, and often don’t even respond when you text them. 2. Best Career Advice: Learn How to Sell No matter what career you're planning, there's no smarter move than learning how to sell. That's especially true for entrepreneurs. You may have the greatest idea in the business world, but if you can't sell that idea, you won't and can't attract investors, customers, or talented employees. It's true for everyone else, too. Finding a great job always involves selling yourself and your skills.