Understanding my pet and what her body language is telling me.

DogSpeak: Improving communication between you and your canine Article. How to Interpret Your Dog's Body Language, Facial Expressions and Vocalizations. Dog Body Language: Eyes, Ears, Tails, and More. Dogs are very expressive animals. 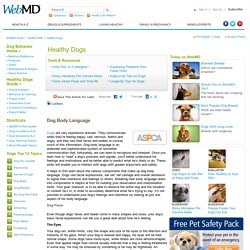 They communicate when they’re feeling happy, sad, nervous, fearful and angry, and they use their faces and bodies to convey much of this information. Victoria Stilwell Positively. Home >> Dog Training >> Understanding Dogs >> Canine Body Language Because dogs don't speak our language, the only way to truly comprehend and communicate with them is for us to understand and appreciate what they are telling us through their body and vocal language. 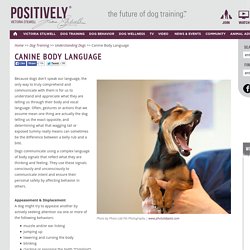 Often, gestures or actions that we assume mean one thing are actually the dog telling us the exact opposite, and determining what that wagging tail or exposed tummy really means can sometimes be the difference between a belly rub and a bite. Dogs communicate using a complex language of body signals that reflect what they are thinking and feeling. They use these signals consciously and unconsciously to communicate intent and ensure their personal safety by affecting behavior in others. Appeasement & Displacement A dog might try to appease another by actively seeking attention via one or more of the following behaviors: The Pet Professional Guild - Dog Body language. Signs of Anxiety These signs indicate that your dog is uncomfortable with the current situation and there is a need for intervention to prevent pushing the dog to the point of biting, and to make sure your canine friend is happy and not feeling anxious. 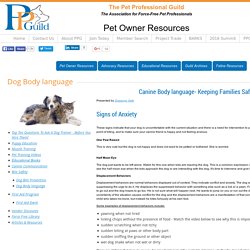 One Paw Raised This is very cute but the dog is not happy and does not want to be petted or bothered. She is worried. Half Moon Eye The dog just wants to be left alone. Displacement Behaviors Displacement behaviors are normal behaviors displayed out of context. Some examples of displacement behaviors include: yawning when not tired licking chops without the presence of food - Watch the video below to see why this is important sudden scratching when not itchy sudden biting at paws or other body part sudden sniffing the ground or other object wet dog shake when not wet or dirty. Reading Canine Body Language. Nervous Dog Behavior - Avoidance & Collar Anxiety. As my family of five (2 humans, 2 dogs and a bird) prepares for our big move, a lot of to-do’s are popping up. 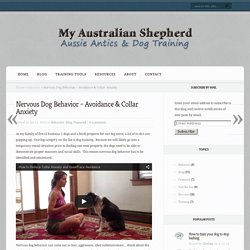 One big category on the list is dog training. Australian Shepherd, Dog Body Language and Aussies. Dog Owner's Guide Profile: Australian Shepherd. Born to herd sheep and cattle in rugged western terrain Introduction Bundled against the wind and dampness, the cowboys mounted up ready to drive the cattle towards the winter pens. 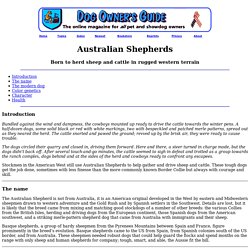 A half-dozen dogs, some solid black or red with white markings, two with bespeckled and patched merle patterns, spread out as they neared the herd. The cattle snorted and pawed the ground; revved up by the brisk air, they were ready to cause trouble. The dogs circled their quarry and closed in, driving them forward. Stockmen in the American West still use Australian Shepherds to help gather and drive sheep and cattle. The name The Australian Shepherd is not from Australia, it is an American original developed in the West by eastern and Midwestern sheepmen drawn to western adventure and the Gold Rush and by Spanish settlers in the Southwest. Basque shepherds, a group of hardy sheepmen from the Pyrenees Mountains between Spain and France, figure prominently in the breed’s evolution. Socializing a Reserved Puppy - TheAustralianShepherd.net - Everything Aussie!

There isn’t a lot out there about how to recognize a reserved puppy and then how to rear them so they grow up to be tractable adults, so I thought I would put this out there. 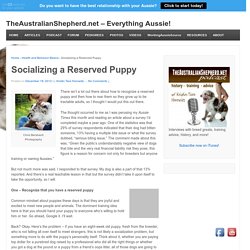 The thought occurred to me as I was perusing my Aussie Times this month and reading an article about a survey I’d completed maybe a year ago. One of the statistics was that 29% of survey respondents indicated that their dog had bitten someone, 13% having a multiple bite issue or what the survey dubbed, “serious biting issue.” The comment made about this was, “Given the public’s understandably negative view of dogs that bite and the very real financial liability risk they pose, this figure is a reason for concern not only for breeders but anyone training or owning Aussies.”

But not much more was said. I responded to that survey. Which Emotions Do Dogs Actually Experience? Most people can read emotions in their dog quite easily. 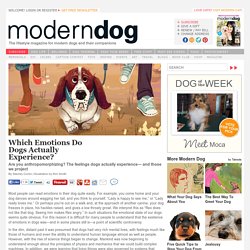 For example, you come home and your dog dances around wagging her tail, and you think to yourself, “Lady is happy to see me,” or “Lady really loves me.” Or perhaps you’re out on a walk and, at the approach of another canine, your dog freezes in place, his hackles raised, and gives a low throaty growl. We interpret this as “Rex does not like that dog. Seeing him makes Rex angry.” In such situations the emotional state of our dogs seems quite obvious. In the dim, distant past it was presumed that dogs had very rich mental lives, with feelings much like those of humans and even the ability to understand human language almost as well as people. Since much of the science of the time was sponsored by church-related schools and universities, it is not surprising to find that the researchers would not assert the existence of higher levels of mental functioning such as emotions in animals. Dog Body Language. SEE ALSO: ABCs of Dog Life, Getting The Behavior You Want From Your Dog, Meeting Fearful Dogs Safely, Staying Safe Around Dogs. 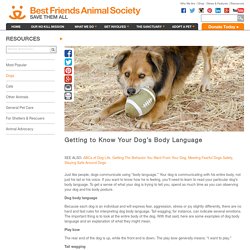 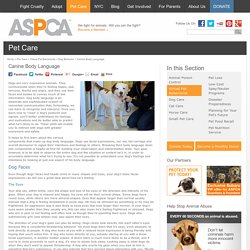 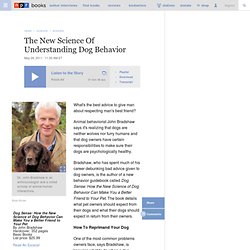 Some can, while others will fight like — well, like cats and dogs. Why the inconsistency? The problem may be that the two species don't always speak the same language. Read Your Dog’s Body Language. The movie Up features a dog with a collar that translates his thoughts into sentences like "I have just met you, and I love you! " Real dogs, however, speak more with body language than with barks.