Laurie Santos: A monkey economy as irrational as ours 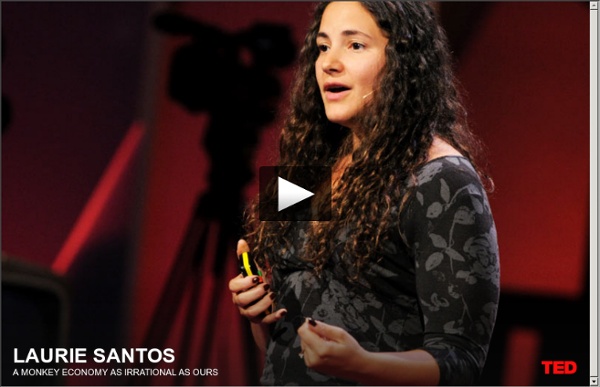 Stephen Hawking: "Humans Have Entered a New Stage of Evolution" Although It has taken homo sapiens several million years to evolve from the apes, the useful information in our DNA, has probably changed by only a few million bits. So the rate of biological evolution in humans, Stephen Hawking points out in his Life in the Universe lecture, is about a bit a year. "By contrast," Hawking says, "there are about 50,000 new books published in the English language each year, containing of the order of a hundred billion bits of information. 7 TED talks on monkeys, and 7 on mind control Science Play with the brain: An online game that’s helping map the connections of the retina Sebastian Seung is one of the most influential explorers of our time — and his terrain is the human brain. You may remember Seung’s talk from TEDGlobal 2010, in which he uses the relatively new term “connectome,” to describe the connections between each of the hundreds of millions of neurons in our brains that make […]

Evolution in Action: Lizard Moving From Eggs to Live Birth Evolution has been caught in the act, according to scientists who are decoding how a species of Australian lizard is abandoning egg-laying in favor of live birth. Along the warm coastal lowlands of New South Wales (map), the yellow-bellied three-toed skink lays eggs to reproduce. But individuals of the same species living in the state's higher, colder mountains are almost all giving birth to live young. Smithsonian Human Origins Program Australopithecus afarensis Nickname: Lucy's species Where Lived: Eastern Africa (Ethiopia, Kenya, Tanzania)

"Lucy" Kin Pushes Back Evolution of Upright Walking? Lucy—a 3.2-million-year-old skeleton discovered in 1974—belongs to , a species which scientists think was an early direct ancestor of modern humans. An exceptionally petite female—her estimated height was 3.5 feet (1.1 meters)—Lucy's small frame has been interpreted as not being totally adapted for human-like, upright walking. (See: "6-Million-Year-Old Human Ancestor 1st to Walk Upright?" How did life originate? How did life originate? Living things (even ancient organisms like bacteria) are enormously complex. However, all this complexity did not leap fully-formed from the primordial soup. Instead life almost certainly originated in a series of small steps, each building upon the complexity that evolved previously:

How We Are Evolving Thousands of years ago humans moved for the first time into the Tibetan plateau, a vast expanse of steppelands that towers some 14,000 feet above sea level. Although these trailblazers would have had the benefit of entering a new ecosystem free of competition with other people, the low oxygen levels at that altitude would have placed severe stresses on the body, resulting in chronic altitude sickness and high infant mortality. Earlier this year a flurry of genetic studies identified a gene variant that is common in Tibetans but rare in other populations. This variant, which adjusts red blood cell production in Tibetans, helps to explain how Tibetans adapted to those harsh conditions. Neandertal Children Developed on the Fast Track Parents who think their kids are growing up too fast should be glad they're not Neandertals. A new study of the fossilized teeth of eight Neandertal children finds that their permanent teeth grew significantly faster and erupted earlier than those of our own species, Homo sapiens. Taken with recent studies showing subtle differences in the brain maturation and developmental genes in Neandertals and H. sapiens, the new data suggest Neandertal kids may have reached adulthood a few years faster than modern human children do. Researchers have long known that humans grow up slowly.

Neandertal Brains Developed More Like Chimps' With brains as big as ours, Neandertals were no dumb brutes. But their brains may have developed in a manner much different from the way ours do, according to anew study. The differences suggest that Neandertals did not see the world the same way we do and may not have been as adept at language or forming complex social networks. New Hypothesis for Human Evolution and Human Nature Click on image for a high-resolution version. Domestic animals, like this water buffalo in Viet Nam, live intimately with humans and provide renewable resources to humans that communicate well with them. Photo by Greg Luna. 20 July 2010 — It's no secret to any dog-lover or cat-lover that humans have a special connection with animals. But in a new journal article and forthcoming book, paleoanthropologist Pat Shipman of Penn State University argues that this human-animal connection goes well beyond simple affection. Shipman proposes that the interdependency of ancestral humans with other animal species — "the animal connection" — played a crucial and beneficial role in human evolution over the last 2.6 million years.