Slow Living. ‘Buy Now, Build Now’ is the Real Revolution. NEW YORK, United States — When laying the foundations for what would become Moda Operandi, back in the summer of 2009, I believed the fashion system needed significant change. 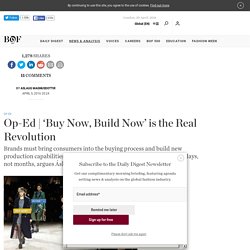 Runway collections had become instantaneously viewable online, but were still unavailable for immediate purchase. Meanwhile, “fast fashion” companies were knocking off and delivering the latest trends to consumers in a matter of weeks, long before pieces from actual designer collections arrived in shops, months later, by which point they were already yesterday’s news. This made no sense. Moda Operandi’s digital trunkshow model helped solve this problem. Brands could finally leverage expensive runway shows as direct-to-consumer shopping events. Independents day: why are small retailers popular? How Key Pieces Made a Comeback. LONDON, United Kingdom — Walk into one of Saint Laurent’s 90 boutiques, spread across six continents, and similar rails of leather jackets, backpacks and clutch bags in varying colours and sizes dominate the veined marble-floors. 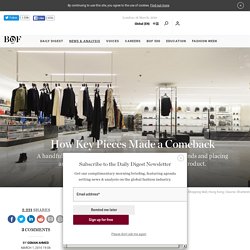 Gone are the days when Saint Laurent, or even Apple for that matter, marketed different products to worldwide markets. Now, certain luxury fashion brands are placing more focus on core, year-round product, immediately recognisable via a brand’s inimitable handwriting. Of course, fashion houses and ready-to-wear designers have always had house classics — think of Chanel’s bouclé jacket, Mulberry’s Bayswater handbag or a glitzy Dolce & Gabbana cocktail dress. Over half of US consumers think organics are an excuse to charge more. Organics would seem tailor-made for shoppers seeking foods and beverages that are healthier for them, their families and the planet, but new research from Mintel reveals that Americans appear confused about the benefits of organics, with many perceiving the organic label as nothing more than an excuse to sell products at a premium. 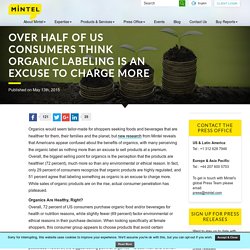 Overall, the biggest selling point for organics is the perception that the products are healthier (72 percent), much more so than any environmental or ethical reason. In fact, only 29 percent of consumers recognize that organic products are highly regulated, and 51 percent agree that labeling something as organic is an excuse to charge more. While sales of organic products are on the rise, actual consumer penetration has plateaued. Rising cost of clothes could signal end to 'cheap chic' The days of "cheap chic" and throwaway fashion could be numbered, because the cost of clothes is rising at its fastest rate for nearly 15 years. 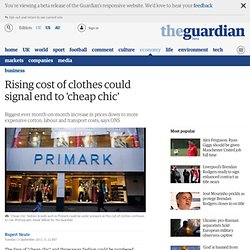 The "fast fashion" trend, where T-shirts sell for £2 and jeans are priced at less than a fiver in supermarkets, is being battered by big increases in the cost of cotton, labour and transport. Figures show the cost of clothing jumped 3.7% between July and August – the biggest month-on-month increase since the Office for National Statistics (ONS) started compiling the data in 1997. The biggest price rises were recorded on coats and jackets. The leap in clothing prices was one of the biggest contributors to a 4.4% increase in the cost of living in August, measured by the consumer prices index (CPI). Earlier this year, the price of cotton hit its highest level, in real terms, since the American civil war in the 1860s and traders are worried that this year's crop may be hit by floods in Pakistan and tropical storms across the US cotton belt.

Customer Experience Bounces Ahead. Customers have already figured out that it’s the experience that counts. 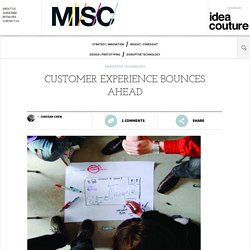 After decades of neglect, customers – and the moments that they share with your brand – have reappeared on the radar screens of customer-facing businesses. It’s as if business has suddenly discovered them, much as a chemist finds a new element on the periodic table or a biologist discovers a species that no one knew existed. But is this the birth of a new paradigm, or the renaissance of something long forgotten? Companies that are customer-focused at heart have always been around, but their numbers are small enough to be counted on two hands. Slow fashion. Fast speed in fashion is a defining characteristic of today’s textile and clothing industry. 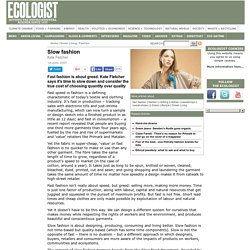 It’s fast in production – tracking sales with electronic tills and just-intime manufacturing, which can now turn a sample or design sketch into a finished product in as little as 12 days; and fast in consumption – a recent report revealed that people are buying one third more garments than four years ago, fuelled by the rise and rise of supermarkets and ‘value’ retailers like Primark and Matalan.

Yet the fabric in super-cheap, ‘value’ or fast fashion is no quicker to make or use than any other garment. Meet the Aspirationals - The Shift. New research by BBMG and GlobeScan confirms the rise of more than two billion consumers globally who are uniting style, social status and sustainability values to redefine consumption. 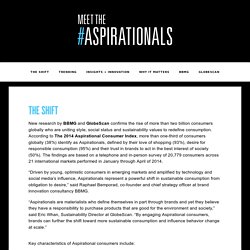 According to The 2014 Aspirational Consumer Index, more than one-third of consumers globally (38%) identify as Aspirationals, defined by their love of shopping (93%), desire for responsible consumption (95%) and their trust in brands to act in the best interest of society (50%). The findings are based on a telephone and in-person survey of 20,779 consumers across 21 international markets performed in January through April of 2014. “Driven by young, optimistic consumers in emerging markets and amplified by technology and social media’s influence, Aspirationals represent a powerful shift in sustainable consumption from obligation to desire,” said Raphael Bemporad, co-founder and chief strategy officer at brand innovation consultancy BBMG. Key characteristics of Aspirational consumers include: The power of aspiration. Great brands fire people’s hopes and ambitions. 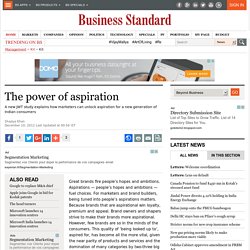 Aspirations — people’s hopes and ambitions — fuel choices. For marketers and brand builders, being tuned into people’s aspirations matters. Because brands that are aspirational win loyalty, premium and appeal. Brand owners and shapers strive to make their brands more aspirational. However, few brands are so in the minds of the consumers. Businessinsider. MOVE: Briefing: Move Slower. The big players in this world, (H&M, Zara, Forever 21, Topshop, Primark, Target, as well as fashion groups like LVMH and PVH), reinterpret and turnaround well- spotted trends ‘just in time’ for us all to be, as it’s known in fashion circuits, directional. 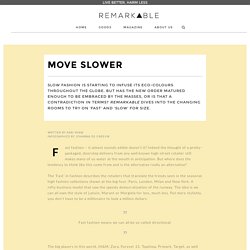 This admirable principle unfortunately comes with costs other than the little one on the all-important price tag that merrily hustles hasty purchases. The origins of ‘Fast’ date back to the late forties and all these years later value-fashion retailers, as they are sometimes known, show no signs of slowing down. Fast fashion is spawning ever faster. In 2014, H&M (who also own Cos, &OtherStories, Weekday and Cheap Monday) opened a net total of 314 new stores. The 2014 annual report states the company plans to open another 350 physical stores and provide an additional nine markets with online shopping facilities this year. David report natures living wisdom.