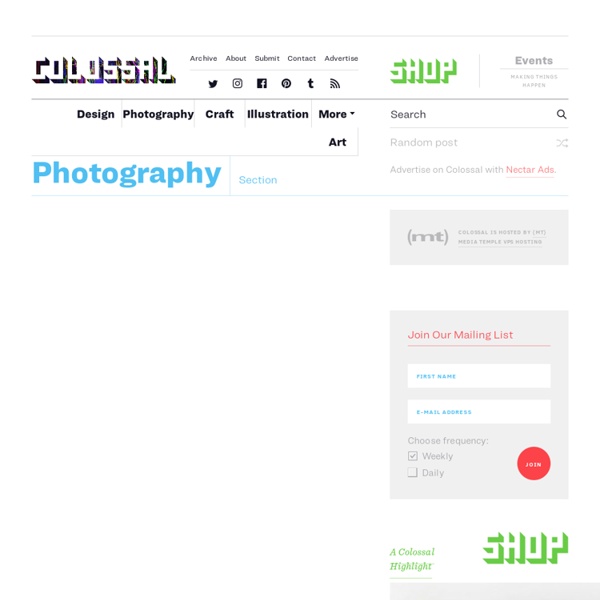 Over the last three years photographer Jem Cresswell has photographed humpback whales during their annual migration to Vava’u, Tonga, swimming with the great creatures in the vast waters of the southern Pacific Ocean. Cresswell’s series Giants captures the individual personality of the great whales, each of which seem to pose specifically for his underwater camera. “I was initially drawn to the whales’ gentle nature, sheer size and the feeling of insignificance in their presence,” said Cresswell. “Over the past 3 years returning to Tonga, I have sought to capture intimate portraits of these complex and conscious animals, bringing the viewer into the world of these mystical giants.” In addition to being intrigued by the animals’ size, the Australian-based artist is also fascinated by their brains. In 2006, spindle cells, which were only thought to be present in humans and great apes, were also found to exist within the brains of humpback whales.

Three Shark Photographers You Need to Follow Yuri Kozyrev recalls the winter of 1999 as one of the most trying and tragic of his career as a photographer. It was the eve of Vladimir Putin’s ascent to the Russian presidency, and the height of the Russian bombardment of Chechnya, when entire towns in that breakaway republic were, as the Russians often put it, “made level with the earth.” Kozyrev, a native of Moscow, documented both of Chechnya’s wars against Russia in the 1990s. ​Lettres Grandes with Clémence Poésy As the sun sets on the banks of the Seine, Clémence Poésy settles into a vintage ride to read a love letter written by poet Paul Éluard, to his first wife, Gala, on Friday May 15, 1936, several years after she had left him for Salvador Dalí. Poésy takes on the tone of a modern-day Gala, a self-assured seductress, who was famously a muse to a whole slew of Surrealist artists and writers, including Max Ernst and André Breton. Reading the letter with a hint of regret, she stands firm by her decision to trade in the poet for the painter. Directed by Elsa Klughertz, the intention was to convey the sense of undated emotion that is tangible in personal letters.

Travel Photography 2016 Kevin Pogorzelski, November winner. “On safari in Kenya, we were forced to stop our jeep for this family of ostriches to cross the dirt track. What made it so engaging was the mother attentively waiting for the chicks to cross while, out of shot, the father was leading the way”. MICK RYAN, JUDGE: Funny-looking flightless birds and their offspring give us comedy and cuteness – and an immediate emotional response. A clear monthly winner by anyone’s standards – and what lovely colour. (Photo by Kevin Pogorzelski/The Guardian) Agnieszka Rayss I photographed a process without which life Warsaw would be impossible. We draw water from beneath the Vistula and return it to the river. These places are seldom seen. Mysterious places, at the heart of the city, but un-urban, by the river, but hidden beyond thick growth. The relationship between the river and the city is something absolutely fundamental, physical. My theme is the exchange that goes on between the river and the city, the water circulation cycle.

Shelter Dogs - animal - dog - chien Lady Bell is an energetic and smart girl. She loves to give and receive affection (especially belly rubs). Lady Bell loves to play with toys. If you put out five toys, she will rotate through them and play with each of them as if she has never seen them before. She doesn’t like being cooped up in a kennel. Having another fun loving, active dog to play with is also important. Jane Long - Dancing with Costica The Dancing with Costica series initially came about when I decided to brush up on my retouching skills. After finding the Costica Acsinte Archive on Flickr I became fascinated with the images and their subjects. I wanted to bring them to life.

Nature Photographer 2017 Every year, photographers around the world are waiting for the opportunity to send their pictures to National Geographic’s prestigious Photo Contest. Show Full Text The following images were chosen to be the finalists for their beauty, composition, precision and originality. Julian Birbrajer It has been a life long obsession to explore language and time by means of photography. Often I find myself creating new work exploiting the specific context of a newly discovered place through my wide-angle lens. The sources of inspiration are generally words and concepts, and often, in a physical sense, more often than not, flea markets and cemeteries. I have chosen, mostly in order to create a general label for my work, the term ”Photolinguistics”. I am ordinarily not fond of genre classification, but it is an endevour to create an artistic identity, with image and language being its main elements. When I was studying linguistics at the university, I discovered Ferdinand de Saussure and his thoughts on the arbitrary relationship between ”le signifiant” (the sound, the word, the sign, the form) and ”le signifié” (the concept/object, the meaning, the content), i.e. that there is no given connection between them, that it is a question of convention.

Tamara Staples - animal - poule - chicken - food I came to know about the chickens through my uncle, a lifelong hobbyist. I was struck by the variety of shapes and colors of the birds, but I was moved by the individual personalities. My intent in photographing these birds was to create a portrait. Paper Faces ━ Héctor Sos The “Paper Faces” project was created with the intention of linking CreadorVol paper use, paper for the publishing industry as natural, alive and nearby, hence the metaphor and the relationship established between paper and face. From this idea and the need to show the qualities of paper on a four-color printing process is a series of distinctive structures made of paper that cover the faces of the different models and then photographed them. Project for Rosa Lázaro Studio.

Animal Portrait Book by Randal Ford Lets the Subjects Tell Stories SlothThis post may contain affiliate links. If you make a purchase, My Modern Met may earn an affiliate commission. Please read our disclosure for more info. Photographer Randal Ford believes that every animal has a story to tell. This compassionate perspective is at the core of his ongoing Animal Portrait Collection, a striking series that explores his subjects' unique personalities and behaviors. Cesar Ordoñez -Tokyo - JAMBES - HUMOUR To designate the reality, Buddhism uses the word Sunya, which means empty. It is also the name given to the number zero. The observer fills the reality that without their presence would be empty, in the same way that the mathematician can’t work without a number: the zero, a kind of antithesis of a number.