60 insane cloud formations from around the world [PICs] 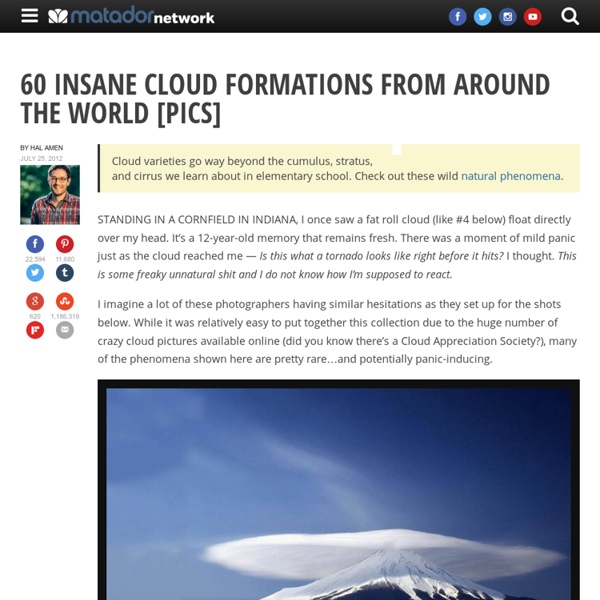 Cloud varieties go way beyond the cumulus, stratus, and cirrus we learn about in elementary school. Check out these wild natural phenomena. STANDING IN A CORNFIELD IN INDIANA, I once saw a fat roll cloud (like #4 below) float directly over my head. It’s a 12-year-old memory that remains fresh. There was a moment of mild panic just as the cloud reached me — Is this what a tornado looks like right before it hits? I thought. I imagine a lot of these photographers having similar hesitations as they set up for the shots below.

The Journal of Anomalous Science The “Vile Vortices” – Taken from Ivan Sanderson’s 1972 article in Saga magazine, “The Twelve ‘Devil’s Graveyards’ from Around the World,” that plotted ship and plane disappearances worldwide, focus attention on 12 specific areas numbered 1 through 12 and defined by large triangles on the Planetary Grid in the previous pages. These areas encompass the approximate area in which the disappearances took place. [Arctic & Antarctic – see Hollow Earth Theory & Admiral Byrd]) Could the earth possibly be acting as a gigantic crystal that resonates at 7 Hz with harmonic focal points at these specific equidistant points? One of the best summaries can be found in the “Anti–Gravity and the World Grid” as compiled by David Childress. The Bermuda Triangle & Japan’s Devil’s Sea are considered anomalies where unexplained phenomena occurs on a frequent basis – such as the disappearance of ships and planes, compasses and altimeters failing regularly, and radio communications become very difficult.

Ballerinas take over the Big Apple by Dane Shitagi Dane Shitagi is a NYC based photographer. Originally from Honolulu, he followed his instincts to live the photographic life. Taking inspiration from the sights and sounds of “the city” as well as the energy and diverse arts, Dane has formed a unique and heartfelt body of work that is sooo beautiful and personal. Rather than molding his ideas to the studio set, he has taken his creativity and inspiration from the world outside – preferring the rawness and atmosphere that only a living city like the Big Apple can bring.

Pictures of Clouds and Sunsets - What a Wonderful World Long’s Peak – Sunset Pictures of Clouds and Sunsets credit: David Evenson These pictures of clouds, nature and landscape are really inspirational. Clouds are created when rising air, through expansion, cools to the point where some of the water vapor molecules “clump together” faster than they are torn apart by their thermal energy. Some of that (invisible) water vapor condenses to form (visible) cloud droplets or ice crystals. After cloud droplets form, one of two things happen. Either they collide with each other and grow by joining together to such a large size that they fall to the ground as rain or snow, or they evaporate and change back into water vapor.

Historic Gathering Of “Whale Sentinels” Linked To Mystery Radio Bursts Prompts Russian Aler World's Largest English Language News Service with Over 500 Articles Updated Daily "The News You Need Today…For The World You’ll Live In Tomorrow." What You Aren’t Being Told About The World You Live In How The “Conspiracy Theory” Label Was Conceived To Derail The Truth Movement How Covert American Agents Infiltrate the Internet to Manipulate, Deceive, and Destroy Reputations March 14, 2017 Dancers out and about [25 pictures] Photographer Jordan Matter created his series “Dancers Among Us” as a reminder to “relish moments large and small, recognize the beauty around you, and be alive!” Here are a bunch of the pics, but there are even more at his website and in his book.

Top-Rated Wildlife Photography Awe-Inspiring Examples Wildlife is considered as one of the most famous category of photography. There is no doubt that a photographer mostly have to risk her/his life to take photographs. Wildlife photography takes years of practice and patience to capture the best moments. In below collection you will find the top-rated wildlife moments that are awarded winners of 2012 and some other shorts that photographers went in a great pain to show us wild side of the world. 10 Rare Cloud Formations Our World This is a list of what I believe to be the top 10 rarest cloud formations. And a brief description of each. No particular order in how ‘rare’ they are though. 1. Nacreous Clouds