41 Places To See Before You Die (Part II) 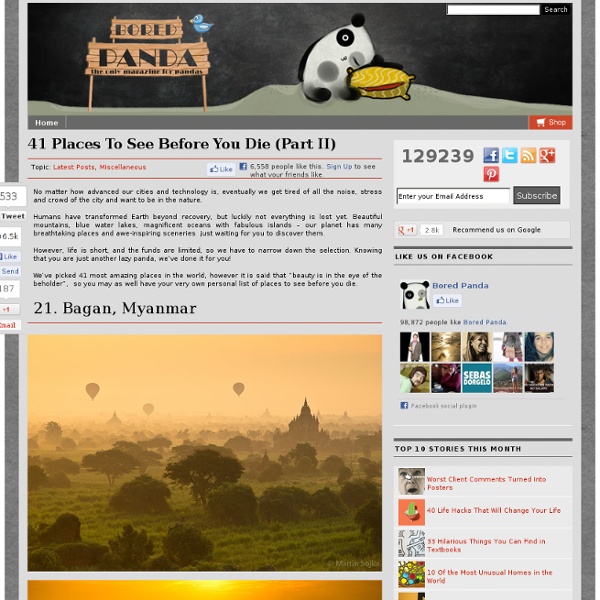 No matter how advanced our cities and technology is, eventually we get tired of all the noise, stress and crowd of the city and want to be in the nature. Humans have transformed Earth beyond recovery, but luckily not everything is lost yet. Beautiful mountains, blue water lakes, magnificent oceans with fabulous islands – our planet has many breathtaking places and awe-inspiring sceneries just waiting for you to discover them. However, life is short, and the funds are limited, so we have to narrow down the selection. We’ve picked 41 most amazing places in the world, however it is said that “beauty is in the eye of the beholder”, so you may as well have your very own personal list of places to see before you die. 21. Bamboos for: Martin Sojka Bagan is notable for its expanse of sacred geography, the number and size of their individual ancient monuments. 22. Bamboos for: Tomas Rawski | szeke | jo vh | kk+ 23. Bamboos for: chii :3 | Andrew Hux | fra.ps 24. 25. 26. Bamboos for: emmettanderson 27.

Places to see at least once in life They say there are places in this world that anyone should see them at least once in life. Although we want each of you to go see them live, and we offer in the form of photos below. If I had to redo the path for real, the steps you would wear in Norway in Greece, Iceland, Netherlands, Croatia, China and Bora Bora. Whether it will attract the ocean or dream of green forests and endless, fascinating places of the world is waiting to delight. And who knows how many are still undiscovered? Preachers Rock, Preikestolen, Norway Zakynthos Island, Greece Skaftafeli, Iceland Plitvice Lakes, Croatia Lakes Jiuzhaigou, China Hotel Four Seasons Bora Bora Paterswolde Meer, a lake south of Groningen, Netherlands Marble caves, Chile Chico, Chile Marqueyssac gardens, Dordogne, France Greenland Capilano suspension bridge, Vancouver, Canada Valley of the Ten Peaks, Moraine Lake, Alberta, Canada Multnomah Falls, Oregon, USA Seljalandsfoss Waterfall, south coast of Iceland Labels: Places to see at least once in life

Hidden Beach in Marieta Islands, Mexico Located in the Marieta Islands, about 20 nautical miles from Puerto Vallarta, lies an idyllic beach paradise hidden underneath a hole in the ground. Called the “Hidden Beach” or “Playa de Amor” (Beach of Love), this one-of-a-kind natural wonder has remained untouched by human hands for many years. Within its natural cavernous shell, crystal-clear turquoise waters peacefully lap against its powdery white shores, out of sight and out of reach from the rest of the world. Image source However despite its fame, the Hidden Beach still remains unsullied due to the difficulty of getting to it. The origins of this secluded marvel comes as a surprise. Image source These islands known as the “Galapagos of Mexico,” are in themselves an ecological gem. Due to its tropical climate, the Marieta Islands, including the Hidden Beach, enjoy 12 months of sunny days. Image source Image source Image source Featured image source Post sources: Born Rich | Daily Mail | Huff Post