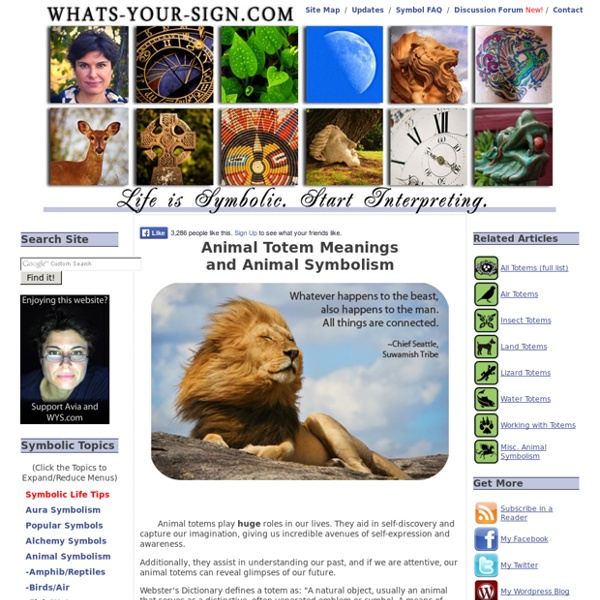 Animal totems play huge roles in our lives. They aid in self-discovery and capture our imagination, giving us incredible avenues of self-expression and awareness. Additionally, they assist in understanding our past, and if we are attentive, our animal totems can reveal glimpses of our future. Webster's Dictionary defines a totem as: "A natural object, usually an animal that serves as a distinctive, often venerated emblem or symbol. Native American animal totems most commonly come to mind when discussing this topic. Since time immemorial, animals have served as harbingers of personality traits we, as humans, all aspire to achieve. Animals afford us visions of how our lives could be if we lived more simply and lived with purity of thought and emotion. By focusing on the attributes of our totems, we internalize these traits and thus begin to externalize the very character we absorb from our totems. Earth Animal Totems Water Animal Totems Air Animal Totems Reptile and Amphibian Totems Related:  Simboli • Astronomy

Symbols for large trans-Neptunian objects Calligraphic version | Fixed-width version Recently, a number of large objects have been discovered in the outer solar system. There has been some debate about whether they are planets or not, but they have caught the public imagination. The IAU is unlikely to give them symbols (if I understand correctly, they have a default "symbol" consisting of their number in a circle) but I wanted them to at least have unofficial symbols. These symbols were created by me and are not official in any way - I offer them to the public domain. In creating these symbols I went by the same principles I had used in creating symbols for the other satellites in our solar system - base symbols on the name of the object in the original language of its name, avoid very complex symbols, and attempt to give the symbols a distinct identity from similar letter-forms. To see these symbols in context with other ones, I've created a list of the largest named objects in our solar system, with a symbol by each object. ).

Occult of Personality | Peering Behind the Veil What Is an Ideogram? Definition and Examples An ideogram is a graphic picture or symbol (such as @ or %) that represents a thing or an idea without expressing the sounds that form its name. Also called ideograph. The use of ideograms is called ideography. Some ideograms says Enn Otts, "are comprehensible only by prior knowledge of their convention; others convey their meaning through pictorial resemblance to a physical object, and therefore may also be described as pictograms, or pictographs" (Decoding Theoryspeak, 2011). EtymologyFrom the Greek, "idea" + "written" "“[T]he picture [of a finger pointing] is an ideogram; it does not represent a sequence of sounds, but rather a concept that can be expressed in English in various ways: 'go that way' or 'in this direction' or 'over there' or, combined with words or other ideograms, such notions as 'the stairs are to the right' or 'pick up your luggage at that place.' Pronunciation: ID-eh-o-gram

Giant Asteroid Eclipses Star Tonight in Rare Celestial Event: How to Watch Live An asteroid the size of Rhode Island will briefly blot out one of the brightest stars in the sky overnight tonight (March 19-20), and you can watch the rare celestial event live online, weather permitting. At around 2:05 a.m. EDT (0605 GMT) Thursday morning (March 20), a 45-mile-wide (72 kilometers) asteroid 163 Erigone will eclipse Regulus, as seen from a swath of North America, making the 22nd-brightest star in the sky disappear for a few seconds. This "occultation" will be visible from the ground only to people in a narrow corridor in northeastern North America. The predicted occultation path of the bright star Regulus by the asteroid 163 Erigone on March 20, 2014 is shown in this map by Geoff Hitchcox/IOTA using Google Maps. "In my entire 40 years as a professional astronomer, I've never witnessed a star as bright as Regulus — Leo's 'alpha' luminary — being blocked as seen along a populated Earthly path in an easily accessible region," Slooh astronomer Bob Berman said in a statement.

The Widespread Use of Inverted Esoteric Symbols in Fashion - The Conscious Reporter A peculiar t-shirt by the clothing company Crooks and Castles, depicting the symbol of the pyramid with the all-seeing eye and bearing the subtitle “all hail the ruling elite.” Inverted esoteric and occult symbols are astoundingly widespread in the clothing industry. They are popular with consumers, and promoted by many seemingly non-associated companies. What’s behind this dark symbolic trend? An examination of the meanings, origins and effects of this symbology reveals why we should all take more care with what we wear. Symbols are a powerful medium of communication, conveying instantaneous information in an easily accessible way. Understanding Esoteric Symbols Many symbols throughout history have their roots in a universal language of sorts that conveys principles found in the universe. Understanding the meaning of certain esoteric symbols goes hand-in-hand with obtaining knowledge of the esoteric. The Dark and Light Side of Esoteric Knowledge

The Official Web Site of Zecharia Sitchin Black Sun (symbol) Neo-Nazi and occult symbol The "Black Sun" symbol as seen in Wewelsburg Castle's North Tower. The floor of the former SS Generals' Hall (German: Obergruppenführersaal) on the first floor of the North Tower of Wewelsburg Castle showing the dark green mosaic at the center of the hall In 1933, Heinrich Himmler acquired Wewelsburg, a castle near Paderborn, Germany. Himmler intended to make the structure into a center for the SS, and between 1936 and 1942, Himmler ordered the building expanded and rebuilt for ceremonial purposes. As a product of Himmler's remodeling, twelve dark-green radially overlaid sig runes, such as those employed in the logo of the SS, appear on the white marble floor of the structure's north tower, the Obergruppenführersaal or "General's Hall". Along with other symbols from the Nazi era such as the Wolfsangel, the sig rune, and the totenkopf, the black sun is used by Satanists.

Maya Once considered an unsolvable enigma, recent advances in the decipherment of the Maya writing system has not only shed light on the mechanics of the script, but also on the socio-political, artistic, and historical aspects of Maya civilization. As a whole, the Maya people created the longest lasting civilization of the New World. It became distinguishable from other early farming cultures of Mesoamerica in the middle of the first millenium BCE, when the first great Maya cities were constructed. Their culture endured through changes, wars, and disasters until it was suppressed by the Spanish conquest in the 16th and 17th centuries. The last indepedent Maya kingdom of Tayasal, fell as late as 1697. General Overview The Maya hieroglypic writing is arguably one of the most visually striking writing systems of the world. While we're on the subject of what the Maya could "say", let's talk about Maya languages. The visual construction of Maya glyphs is very interesting. Numbers and Calendar

6 Famous Symbols That Don't Mean What You Think The entire point of using a symbol is that it conveys meaning and saves space -- you see one picture of a stick figure in a dress and you no longer need the phrase "This is the place where female humans can discharge waste." But what is fascinating is that sometimes the meaning of a symbol will get lost to history, but we'll just keep right on using it anyway. But would we do that if we knew ... Note: Did you know that Cracked used to be a magazine? #6. Kevin Jaako Apart from the cross, the most ubiquitous symbol of Christianity is the ichthys, known to us as the Jesus Fish, and today it appears predominantly in its natural habitat -- car bumpers. Getty"Seriously, guys? The Origin: It's a vagina. Jezebel / Wikipedia New Starbucks Haddockuccino, served in a vulva cup! According to some researchers, Christians adopted the vagina-fish symbol simply because of how common it was, but later looked for all sorts of non-vaginal justifications for it. GettyOr sex. #5. Getty thehairpinSo yeah. #4.