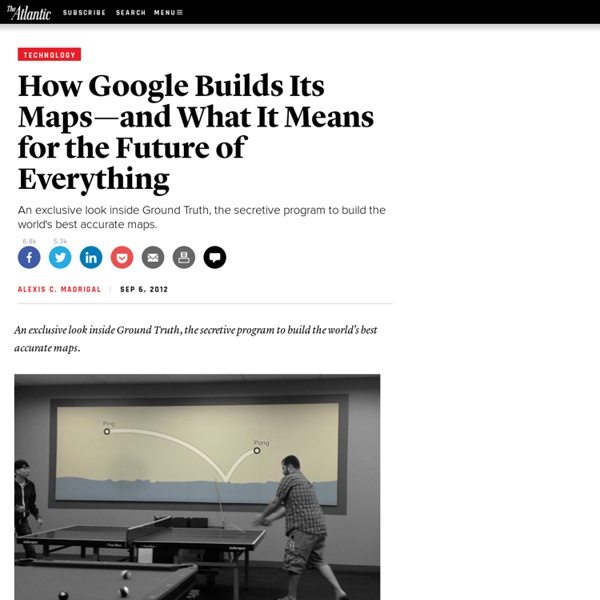 An exclusive look inside Ground Truth, the secretive program to build the world's best accurate maps. Behind every Google Map, there is a much more complex map that's the key to your queries but hidden from your view. The deep map contains the logic of places: their no-left-turns and freeway on-ramps, speed limits and traffic conditions. This is the data that you're drawing from when you ask Google to navigate you from point A to point B -- and last week, Google showed me the internal map and demonstrated how it was built. It's the first time the company has let anyone watch how the project it calls GT, or "Ground Truth," actually works. Google opened up at a key moment in its evolution. And for good reason. "If you look at the offline world, the real world in which we live, that information is not entirely online," Manik Gupta, the senior product manager for Google Maps, told me. This is not just a theoretical concern. But that would entail actually building a better map.

Two Excellent Web Tools to Easily Record and Share Audio Clips February 17, 2015 In today’s post I am sharing with you two of the best simple web tools that you can use to record audio clips. These web-based applications do not require any software installation and you are not even required to have an account to use them. They work right from your browser and they allow you to easily record or upload your audio and generate a link to share it with others. This is by far my favourite. Vocaroo enables you to record or upload audio clips . To record your voice, simple click on the record button and start talking.

YouTube Announces That It Has Hit One Billion Monthly Users, Which Is Roughly Ten Super Bowl Audiences Today, YouTube announced that it has hit a billion monthly users, which is an extremely insane metric. We know that YouTube is the go-to place for silly, interesting and important videos, but these numbers are something that even TV networks dream of. The great part for YouTube is that this means that online video ad spend will go up since the eyeballs appear to be ready, willing and able. It’s not only advertisers that are rushing YouTube, budding music artists are heading there too, and making a career from the attention that they get. Fueling this insane growth is the availability of YouTube on all devices, plus a growing interest from “Generation C,” which happens to love to curate.

Inside the U.S. Military’s Chemical-Weapons Tests Colonel James S. Ketchum dreamed of war without killing. He joined the Army in 1956 and left it in 1976, and in that time he did not fight in Vietnam; he did not invade the Bay of Pigs; he did not guard Western Europe with tanks, or help build nuclear launch sites beneath the Arctic ice. Turntables and Cartridges History of Turntables and How They Work | History of Turntable Cartridges | Cartridges | Turntable Tools Turntable History Fairchild Tables In reproducing a phonograph record, the aim is to take out of the groove exactly the intelligence that was pressed into them. And the wiggles in the groove are meaningless in themselves. They have to induce exactly the right physical motion in a stylus before they make sense---which means that they must move under the stylus at the right speed and that the stylus itself must track the groove accurately, wigwagging as the wiggles demand.

The 'Busy' Trap Anxiety: We worry. A gallery of contributors count the ways. If you live in America in the 21st century you’ve probably had to listen to a lot of people tell you how busy they are. It’s become the default response when you ask anyone how they’re doing: “Busy!” “So busy.” “Crazy busy.”

The Amazon Effect From the start, Jeff Bezos wanted to “get big fast.” He was never a “small is beautiful” kind of guy. The Brobdingnagian numbers tell much of the story. How To Opt Out of Receiving Facebook Ads Based on Your Real-Life Shopping Activity Facebook has announced that it’s teaming up with four of the world’s largest corporate data brokers to “enhance” the ad experience for users. Datalogix, Epsilon, Acxiom, and BlueKai obtain information gathered about users through online means (such as through cookies when users surf the web) as well as through offline means (such as through loyalty cards at supermarkets and product warranty cards). Through the new relationship with Facebook, companies will be able to display advertisements to Facebook users based on data that these data brokers have on individuals. In practical terms, this means that limiting how much information you put on Facebook is not enough to limit how ads are targeted to you on Facebook. Your interests, age, shopping history (including offline), web browsing, location, and much more could be stored by these data brokers and utilized to market to you – even if you’ve been careful not to share this type of information with Facebook.

Articles: Resident Visitor: Laurie Spiegel's Machine Music Photo by Enrico Ferorelli Probably the most remarkable thing about Laurie Spiegel is that a piece of music she made could be the first sound of human origin to be heard by extraterrestrial lifeforms. If aliens exist, of course. Turntable Basics Welcome to the Turntable Basics Advice Page. The purpose of this page is to give a basic introduction to the issues involved in turntable performance. Understanding the sources of feedback, distortion and tracking errors will help you to improve your own stereo system. Many of the strategies available to you are very inexpensive to execute. Getting the most out of your turntable. Correct cartridge alignment.