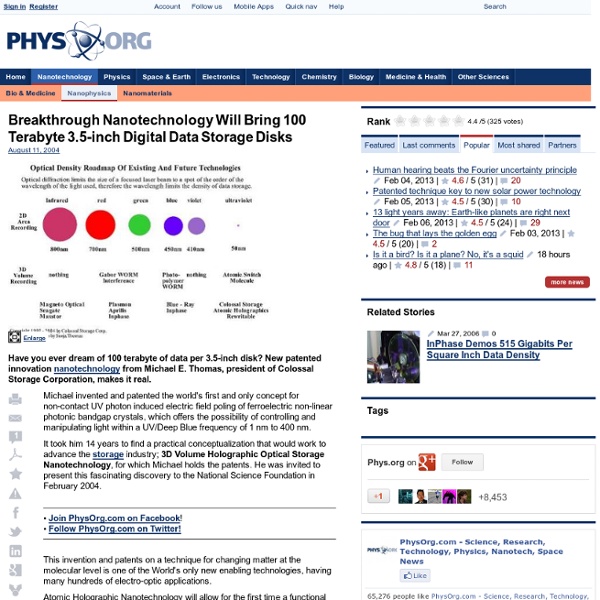 Have you ever dream of 100 terabyte of data per 3.5-inch disk? New patented innovation nanotechnology from Michael E. Thomas, president of Colossal Storage Corporation, makes it real. Michael invented and patented the world's first and only concept for non-contact UV photon induced electric field poling of ferroelectric non-linear photonic bandgap crystals, which offers the possibility of controlling and manipulating light within a UV/Deep Blue frequency of 1 nm to 400 nm. It took him 14 years to find a practical conceptualization that would work to advance the storage industry; 3D Volume Holographic Optical Storage Nanotechnology, for which Michael holds the patents. • Join PhysOrg.com on Facebook! This invention and patents on a technique for changing matter at the molecular level is one of the World's only new enabling technologies, having many hundreds of electro-optic applications. “In 1974 I was making 5 Megabyte disk packs - the biggest at that time in the world.

Welcome to Explorations in Science with Dr. Michio Kaku Nanowire battery can hold 10 times the charge of existing lithium-ion battery Stanford Report, December 18, 2007 Courtesy Nature Nanotechnology Photos taken by a scanning electron microscope of silicon nanowires before (left) and after (right) absorbing lithium. Both photos were taken at the same magnification. The work is described in “High-performance lithium battery anodes using silicon nanowires,” published online Dec. 16 in Nature Nanotechnology. Stanford researchers have found a way to use silicon nanowires to reinvent the rechargeable lithium-ion batteries that power laptops, iPods, video cameras, cell phones, and countless other devices. The new technology, developed through research led by Yi Cui, assistant professor of materials science and engineering, produces 10 times the amount of electricity of existing lithium-ion, known as Li-ion, batteries. "It's not a small improvement," Cui said. The greatly expanded storage capacity could make Li-ion batteries attractive to electric car manufacturers. Cui's battery gets around this problem with nanotechnology.

Physics Flash Animations We have been increasingly using Flash animations for illustrating Physics content. This page provides access to those animations which may be of general interest. The animations will appear in a separate window. The animations are sorted by category, and the file size of each animation is included in the listing. Also included is the minimum version of the Flash player that is required; the player is available free from In addition, I have prepared a small tutorial in using Flash to do Physics animations. LInks to versions of these animations in other languages, other links, and license information appear towards the bottom of this page. The Animations There are 99 animations listed below. Other Languages and Links These animations have been translated into Catalan, Spanish and Basque: En aquest enllaç podeu trobar la versió al català de les animacions Flash de Física. These animations were written by David M.

iRing - The first motion controller for all your music apps and more Take Control Now control your music apps and effects without touching your device with the iRing™ touchless controller for iPhone, iPad and iPod touch. The new iRing uses hand gestures to control parameters of effects and other items in your music apps, allowing you to create stunning and dramatic music in an incredibly fun way by simply moving your hands in front of your device. iRing uses patented advanced image-recognition, motion control and precise geometric positioning technology to give you control of assignable parameters within your apps. Making music and creating killer real time effects for nonstop dance music and grooves is now easy and as simple as moving your hands… something you probably already do. The ABCs of XYZ Okay, so how does this thing work? Pretty slick, huh? Okay, but in practical terms… Let’s say for instance you want to control an audio effect. The Engine: iRing FX/Control App Music Judo What you get *Legal detail | Warranty

Free Online Course Materials | Physics An Interactive Infographic Maps The Future Of Emerging Technology Can speculation about the future of technology serve as a measuring stick for what we create today? That’s the idea behind Envisioning Technology's massive infographic (PDF), which maps the future of emerging technologies on a loose timeline between now and 2040. Click to enlarge. On it you’ll find predictions about everything from artificial intelligence and robotics to geoengineering and energy. In 30 years, it will also be a great reference for where we thought we might end up. You can download a PDF for free, or--should you want to track our progress toward artificial photosynthesis and space-based solar power by X-ing out accomplishments on your wall--purchase a poster version here.

Chapter 1: Magnetism - Magnetorheological fluids, homemade ferrofluid Magnets and Magnetism We have all played with magnets. A pair of magnets by itself makes a wonderful toy. Through mail-order surplus houses you can get large neodymium-iron-boron magnets of incredible strength. Because of their high strength-to-weight ratios, neodymium-iron-boron magnets seem to be little affected by gravity. If you are showing magnets to a very young person for the first time, there are several tricks you will not want to forget. Put some cheap magnets into some clear plastic bags and drag the bags through some playground sand, or the sand at a beach. A magnetic compass placed near the arcs of powder will align itself with them, following their curve as you move it around. Stroke a bit of iron or steel (such as a pin or a screwdriver) across the magnet. Place two magnets under the paper, separated by a paper clip or other small bit of iron. These simple observations form the backdrop for the rest of this section. Experimenting with magnetorheological fluids

How Do You Create A Culture Of Innovation? This is the third part in a series by Scott Anthony, author of The Little Black Book Of Innovation. It sounds so seductive: a “culture of innovation.” The three words immediately conjure up images of innovation savants like 3M, Pixar, Apple, and Google--the sorts of places where innovation isn’t an unnatural act, but part of the very fabric of a company. While culture is a complicated cocktail, four ingredients propel an organization forward: the right people, appropriate rewards and incentives, a common language, and leadership role-modeling. The Innovator’s DNA Has Four Components If you ask most people what makes a great innovator, the most common response is innate gifts from parents or a higher power. At the core is what the professors call “associational thinking.” Questioning: Asking probing questions that impose or remove constraints. Most organizations have people who follow these behaviors--even if they aren’t immediately obvious to senior leadership. Then it dawned on me.

All Experiments | Practical Physics This website is for teachers of physics in schools and colleges. It is a collection of experiments that demonstrate a wide range of physical concepts and processes. Some of the experiments can be used as starting-points for investigations or for enhancement activities. Physics is a practical science. Good quality, appropriate physics experiments and investigations are the key to enhanced learning, and clarification and consolidation of theory. We have published a new set of resources to support the teaching of practical science for Key Stages 3-5.

untitled Ozone Depletion | Effects of Nuclear Weapons When a nuclear weapon explodes in the air, the surrounding air is subjected to great heat, followed by relatively rapid cooling. These conditions are ideal for the production of tremendous amounts of nitric oxides. These oxides are carried into the upper atmosphere, where they reduce the concentration of protective ozone. Ozone is necessary to block harmful ultraviolet radiation from reaching the Earth's surface. Oxides of nitrogen form a catalytic cycle to reduce the protective ozone layer. The nitric oxides produced by the weapons could reduce the ozone levels in the Northern Hemisphere by as much as 30 to 70 percent. It has been estimated that as much as 5,000 tons of nitric oxide is produced for each megaton of nuclear explosive power.