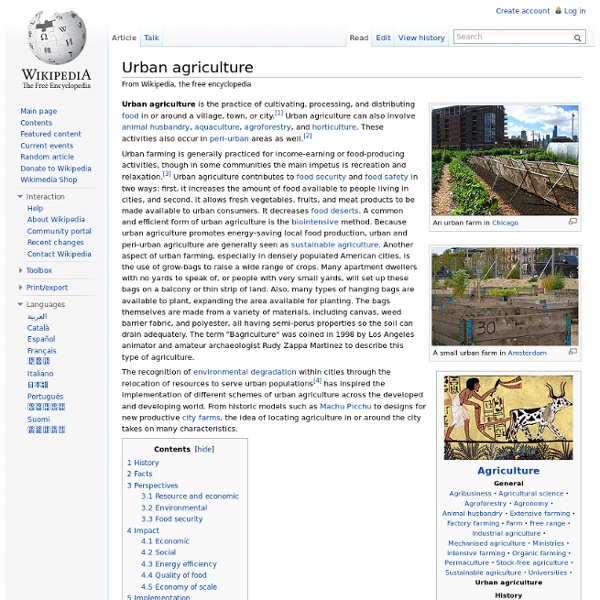 Urban agriculture is the practice of cultivating, processing, and distributing food in or around a village, town, or city.[1] Urban agriculture can also involve animal husbandry, aquaculture, agroforestry, Urban beekeeping, and horticulture. These activities occur in peri-urban areas as well.[2] Urban agriculture can reflect varying levels of economic and social development. History[edit] Community wastes were used in ancient Egypt to feed urban farming.[3] In Machu Picchu water was conserved and reused as part of the stepped architecture of the city, and vegetable beds were designed to gather sun in order to prolong the growing season.[3] Allotment gardens came up in Germany in the early 19th century as a response to poverty and food insecurity.[4] Victory gardens sprouted during WWI and WWII and were fruit, vegetable, and herb gardens in US, Canada, and UK. Perspectives[edit] A vegetable garden in the square in front of the train station in Ezhou, China Resource and economic[edit] [edit]

Urban Microgreens Sow Gourmet is a young business that makes and sells flat-pack 'grow your own' microgreen kits that fold down to the size of a letter and can be posted for convenience. Microgreens are baby vegetables that grow quickly (in as little as a week!), are highly nutritious, have bright vibrant colours and are delicious! They have been used by innovative chefs for years, and with an endless variety of microgreens available there is always be something to suit the season. We are here to help build awareness about microgreens and urban food growing: with our micro-greenhouse, growing food is easy even in the smallest of spaces and we want to share this with the world! We want to make videos showing how easy and fun growing food in an urban environment can be. Once these videos are made we will use guerrilla marketing techniques (a great way to let people know about something on a tight budget!) Thanks for reading, Thom

Rise of Urban Farming My newest buzzword for 2011 is CSA. I'd never heard the term until recently, but now it seems to be popping up all over, as is interest in sustainable agriculture and urban farming. CSA stands for Community Supported Agriculture -- the practice of signing up with a local farm for weekly produce and, in some cases, meat and dairy. Kimball's book is an engrossing depiction of the back-breaking work and edible rewards of CSA. Urban farming is also on the rise. Urban farming comes in a variety of models. A vision of urban and vertical farming. Next Page: More visions of urban farms. Family of Four Grows Their Food in a Swimming Pool Images: Youtube screen grabs Food Doesn't Get More Local Than That A family living in Mesa, Arizona, has decided to convert an old unused backyard swimming pool into a very productive DIY urban greenhouse, which they named Garden Pool. Within a small, mostly enclosed space, they grow all kinds of vegetables and herbs, as well as raise chickens and tilapia fish. An Oasis in the Desert There's a more detailed list of things they grow and facts about the Garden Pool here. Photo: GardenPool.org The Garden Pool is also off-grid thanks to solar PV! As you can see, space is used very efficiently. Photo: GardenPool.org Upside down tomatoes with radishes growing on top. Growing Your Own Food is Easy & FunWhile you might not want to go quite as far as the Garden Pool, having a garden and growing some of your own food can be both a relaxing hobby and a green way to feed yourself. Via Gardenpool

Can Urban Farming Go Corporate? Farms have sprouted in cities across the country over the past several years as activists and idealists pour their sweat into gritty soil. Now Paul Lightfoot wants to take urban agriculture beyond the dirt-under-your-nails labor of love. He wants to take it corporate. In June, Lightfoot's company, BrightFarms, announced a deal with The Great Atlantic and Pacific Tea Co., or A&P, to provide New York City-grown vegetables to the local chain's supermarkets year-round. With similar deals announced for St. "We're not trying to change the fringes of the supply chain," he said. The idea to grow more food within city limits has spread in recent years along with increased awareness about the quality of our food and where it comes from. In New York, two startups have already begun growing vegetables from the city's large commercial rooftops. "New York is really at the forefront of this," said Kubi Ackerman, of the Urban Design Lab at Columbia University's Earth Institute.

Grow The Easiest Garden on Earth Transition Toronto’s winning film! ‘The people in my neighbourhood’ 7 Oct 2011 Transition Toronto’s winning film! ‘The people in my neighbourhood’ Transition Toronto recently held a film competition for people to use film as a way of communicating Transition. The winner was Mariko Uda with her film ‘The People in my Neighbourhood’. Rather lovely it is too. The judge, Gregory Greene, producer of ‘The End of Suburbia’, said of why he chose this film as the winner: “I really enjoyed Mariko’s film. Mariko makes the point that the various stories in the film are already a reality… she writes: “Yes, that rooftop garden really exists! The composters are at the Stop’s Green Barn. When I thought of buildings for the future, I thought of Rohan Walters. Need something fixed? For the composting toilet I had to go all the way to Vaughn to the Toronto and Region Conservation Authority’s Restoration Services Building. I kid you not – they did not smell at all! The lovely singing at the end were UofT students in Hot Yam!

A Book that aims to bring the farm to the city Carrot City Creating Places for Urban Agriculture By Mark Gorgolewski, June Komisar and Joe Nasr. The Monacelli Press 240 pages How can we make cities into better places for growing food? That’s the central question of Carrot City, and the authors present some very creative strategies for bringing agriculture back to urban settings. Mark Gorgolewski and June Komisar are architects who also teach at Toronto’s Ryerson University. While activists and grass-roots food movements currently command a lot of attention, the authors point out that architects and academics – LeCorbusier and Frank Lloyd Wright among them – have spent years pondering the potential of urban agriculture. Carrot City is a learned book, which offers readers a mix of seemingly utopian visions and real-life case studies. Planning at the neighbourhood scale can facilitate the introduction of agriculture into high-density, high-rise urban areas, the authors argue.

Gotham Greens Local Produce || Gotham Greens || Premium quality locally grown vegetables and herbs High-tech greenhouse planned for downtown Vancouver parkade rooftop VANCOUVER -- The roof of a city-owned downtown parkade will be converted to a high-tech vertical growing space capable of producing 95 tonnes of fresh vegetables a year. Vancouver-based Valcent Products has entered into a memorandum of understanding with EasyPark, the corporate manager of the city’s parkades, to build a 6,000-square-foot greenhouse on underutilized space on the roof of the parkade at 535 Richards Street, in the heart of the downtown core. The inside of the greenhouse will be anything but ordinary. Four-metre-high stacks of growing trays on motorized conveyors will ferry plants up, down and around for watering, to capture the sun’s rays and then move them into position for an easy harvest. The array will produce about the same amount of produce as 6.4 hectares (16 acres) of California fields, according to Christopher Ng, chief operating officer of Valcent. Construction will begin on the project in January, with an eye to harvesting the first crops in April.