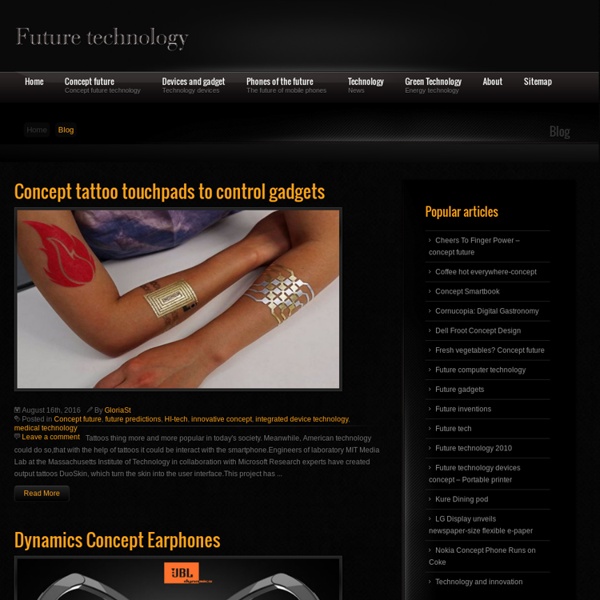 The first camera of the future LYTRO Illum - the device of the future, a camera that completely changes our understanding of photography and image processing. This camera, which allows you to change the focus, depth of field and even the slope of the image manually on the computer!Several years ago company LYTRO caused furor among amateur photographers. She introduced the concept of the camera, which not makes image, and the li... Concept the world’s fastest elevator

Scientists Make Headway Toward Invisibility Cloaking The world of science fiction is rife with examples of invisibility - whether it is Harry Potter’s cloak, Romulan cloaks integrated into a spaceship’s shields, or the One Ring that helped our favorite hobbits steer clear of orcs. Of course, actually creating a device that is capable of bending light so an object appears to be invisible to the eye is a fairly tall order. However, a group of materials scientists led by Debashis Chandra at the University of Central Florida have made significant strides forward to making this long-fabled device a reality. By using nanotransfer printing, the team achieved optical properties across a large swath of material that have never been accomplished on such a large scale before, breaking barriers toward the development of a cloak that could make an object appear to be invisible. The results were detailed as a cover story in the journal Advanced Optical Materials.

Does My Web Site Suck 165 Mortal Sins That Will Send Your Site to Web Design Hell Checklist 1 | Checklist 2 | What do I do now? | The Top 30 Web Design Mistakes Why can't we see that our web pages suck? I've never figured out the answer to this question. Cops In Dubai Are Using Google Glass To Catch Speeding Drivers Ayuda Web A police officer wearing Google Glass If you think traffic light cameras and discreet roadside cops are irritating enough, authorities may upgrade to Google Glass for catching speeding drivers soon enough. Police in Dubai have begun using Google's wearable display in an effort to capture traffic violators, according to a report by Gulf News spotted by The Verge. The technology is currently being tested by the Dubai Police Smart Services Department using two applications for tracking road-bound crimes. One app allows police officers to take photos of traffic violations using Glass, which would instantly be uploaded to the police department's system.

How to hide files and folders in Windows XP – The easy way Ok, so here’s a quick little tip for those people who want to hide a particular file or folder on their computers, but don’t feel like spending $40 on a piece of software for that one single purpose! This method of hiding files and folders in Windows XP is quite rudimentary, which means that if someone knows what they are doing with computers, it could be found pretty easily. However, it’s a great way to hide folders from people like your parents or people who only know how to check their email and that’s it! First of all, if you have a folder you want to hide, don’t create the folder in some obvious place such as My Documents, instead put it in a location that someone would typically not look into. For example, create a new folder under C:\Program Files.

Ray Kurzweil’s Mind-Boggling Predictions for the Next 25 Years In my new book BOLD, one of the interviews that I’m most excited about is with my good friend Ray Kurzweil. Bill Gates calls Ray, “the best person I know at predicting the future of artificial intelligence.” Ray is also amazing at predicting a lot more beyond just AI. This post looks at his very incredible predictions for the next 20+ years. Ray Kurzweil.

How to see into the future Billions of dollars are spent on experts who claim they can forecast what’s around the corner, in business, finance and economics. Most of them get it wrong. Now a groundbreaking study has unlocked the secret: it IS possible to predict the future – and a new breed of ‘superforecasters’ knows how to do it Binary - it's digitalicious! How binary works: The binary number system (aka base 2) represents values using two symbols, typically 0 and 1. Computers call these bits. A bit is either off (0) or on (1). Of Time Machines and Foresight Garages: About the September-October FUTURIST One of the most frequently asked questions here at the World Future Society is How do I become a futurist? The first step, of course, is to be interested, but the second, as with any profession, is to learn the required skills. So the next question is Where? There are no better experts on this subject than futurists themselves, so we invited essays from anyone who has participated in a futures-education program—as a learner, as a teacher, or as an administrator. And we didn’t rule out self-learners!

Elementary Technology Contact Blog The American Association of School Librarians (AASL) announced the 2011 Top 25 Websites for Teaching and Learning. The websites are presented in various categories each with the associated standards for the 21st century learner. The sites are are free and have been judged by the association as sites that are user friendly and encourage a community of learners to explore and discover. In 3rd Grade at SPES, we have been learning about a Famous American each week. The students research each Famous American, and then they have the choice of projects to present the information they found.

A beautiful but creepy vision of the "smart glass" future Two things: First, considering the touchscreen maps at my local shopping centres ae almost always down or only half work, and smeared with public finger goop, the maintenance factor would be huge in this kind of world. They'd always need constant repairs, cleaning, and upgrading. And the other thing is, though the touchscreen concept works okay at a small handheld level, if every single button you push has no tactile response, that satisfaction of a physical reaction to pressing a button, it can get quite exhausting for the fingers. Typing, which would be slowed down on a vertical or flat horizontal surface anyway, would be very painful to tap away at, with your fingertips repeatedly hitting solid glass with no give. I can see the small scale, and informative aspect, like temperature gauges on mirrors and windows, or dashboard info on car windscreens, but this kind of epic interactivity just wouldn't work.