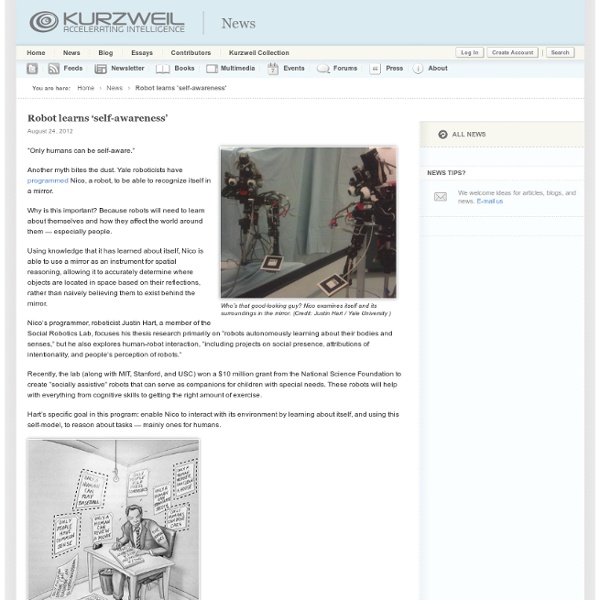 Who’s that good-looking guy? Nico examines itself and its surroundings in the mirror. (Credit: Justin Hart / Yale University ) “Only humans can be self-aware.” Another myth bites the dust. Why is this important? Using knowledge that it has learned about itself, Nico is able to use a mirror as an instrument for spatial reasoning, allowing it to accurately determine where objects are located in space based on their reflections, rather than naively believing them to exist behind the mirror. Nico’s programmer, roboticist Justin Hart, a member of the Social Robotics Lab, focuses his thesis research primarily on “robots autonomously learning about their bodies and senses,” but he also explores human-robot interaction, “including projects on social presence, attributions of intentionality, and people’s perception of robots.” “Only humans can be self-aware” joins “Only humans can recognize faces” and other disgarded myths. Nico in the looking glass References: Justin W. Related:  Emerging Technologies • AI Learning

Non-Human Consciousness Exists Say Experts. Now What? Non-Human Consciousness Exists Say Experts. Now What? Phillip Low at Singularity University Have you ever considered the consciousness, or unconsciousness, of your dog? Earlier this month, some of the leading scientists from around the world congregated at the Hotel Du Vin in Cambridge to discuss the evidence that has amassed over the years. the declaration of consciousness Organized by Philip Low, CEO of NeuroVigil and inventor of the iBrain, the group consisted of 25 of the planet’s top minds on the mind, including honorary guest Stephen Hawking. This announcement arises in a manner similar to the Pluto files in 2006, when the world's leading astronomer's demoted Pluto from planet to "dwarf planet". As mankind continues to explore the universe, many more discoveries will prompt an official announcement such as the one Phillip Low delivered this week at Singularity University. For more on the conference and the Cambridge declaration, check out

Can A Computer Finally Pass For Human? “Why not develop music in ways unknown…? If beauty is present, it is present.” That’s Emily Howell talking – a highly creative computer program written in LISP by U.C. Classical musicians refuse to perform Emily’s compositions, and Cope says they believe “the creation of music is innately human, and somehow this computer program was a threat…to that unique human aspect of creation.” The article includes a sample of her music, as intriguing as her haiku-like responses to queries. Share Researchers Create Thousand Strong Swarm Of Bots That Can Assemble Into Complex Shapes By itself, this simple little puck-shaped robot is cute, but not revolutionary: It’s a few centimeters across, stands on three pin-like legs, moves a centimeter a second, and costs about $20. Put a thousand or so of these Kilobots together, and you have the largest robotic swarm the world has ever seen. Self-assembling robotic systems exist, but they’ve been limited to dozens, maybe a few hundred robots. Now, a trio of Harvard researchers led by Michael Rubenstein has programmed 1,024 Kilobots to organize themselves into various shapes, such as stars, a wrench, and letters of the alphabet. The work was published in Science this week. Kilobots were designed to mimic the behavior of a swarm of bees, colony of army ants, or flock of starlings. These inexpensive robots have two little vibrating motors to help them slide across surfaces on their skinny rigid legs. The infrared transmitters are also used by the scientists to give commands to all the bots simultaneously. Photo Gallery

Data that lives forever is possible: Japan's Hitachi As Bob Dylan and the Rolling Stones prove, good music lasts a long time; now Japanese hi-tech giant Hitachi says it can last even longer—a few hundred million years at least. The company on Monday unveiled a method of storing digital information on slivers of quartz glass that can endure extreme temperatures and hostile conditions without degrading, almost forever. And for anyone who updated their LP collection onto CD, only to find they then needed to get it all on MP3, a technology that never needs to change might sound appealing. "The volume of data being created every day is exploding, but in terms of keeping it for later generations, we haven't necessarily improved since the days we inscribed things on stones," Hitachi researcher Kazuyoshi Torii said. "The possibility of losing information may actually have increased," he said, noting the life of digital media currently available—CDs and hard drives—is limited to a few decades or a century at most.

Inject Your Eyeballs With Night Vision Synopsis In "people becoming superhuman" news, a small independent research group has figured out how to give humans night vision, allowing them to see over 50 meters in the dark for a short time. Summary Science for the Masses, a group of biohackers based a couple hours north of Los Angeles in Tehachapi, California,theorized they could enhance healthy eyesight enough that it would induce night vision.

She's Not Talking About It, But Siri Is Plotting World Domination | Gadget Lab Photo: Alex Washburn/Wired Apple has a vision of a future in which the disembodied voice of Siri is your constant companion. It goes something like this: You arrive home at the end of a long day and plop down on the couch. This is where Apple is headed with Siri, as the nascent voice-activated AI spreads from our phones to our desktops, our homes and even our dashboards to become our concierge to the digital world. So far, Apple’s results have been a mixed bag at best. “We spend so much time with our cellphones that having an effective personal assistant could be revolutionary,” said Andrew Ng, director of Stanford University’s AI Lab. To do this, Apple must catch up with, and then overtake, Google, which offers voice search capabilities and natural language understanding far superior to Apple’s. Siri debuted to much aplomb with the launch of iOS 5 and the iPhone 4S in 2011. But there are signs of progress. The first step must be a public Siri API.

Man With Severed Spinal Cord Walks Again After Cell Transplant A man paralyzed for two years is now walking again, albeit with a frame, after a transplant to his spine. The treatment, to be published in this month's Cell Transplantation, has been under discussion for a while, but has only now shown success. In 2010, Darek Fidyka was repeatedly stabbed, rendering him paralyzed from the chest down. Fortunately, however, his nose was unscathed. Olfactory ensheathing glia (OEGs) surround olfactory axons, the nerve fibers that conduct electrical charges from the nose to the brain to allow us to smell. What makes them of interest to spinal patients is that OEGs maintain their capacity to promote new neurons into adulthood. While some reptiles can grow new tails, for mammals the capacity for regrowth is lost in most of the nervous system. This capacity for regrowth has inspired spinal researchers frustrated by the fact that the mammalian central nervous system does not regenerate axons.

Top notch AI system about as smart as a four-year-old, lacks commonsense Researchers have found that an AI system has an average IQ of a four-year-old child (Image: Shutterstock) Those who saw IBM’s Watson defeat former winners on Jeopardy! in 2011 might be forgiven for thinking that artificially intelligent computer systems are a lot brighter than they are. While Watson was able to cope with the highly stylized questions posed during the quiz, AI systems are still left wanting when it comes to commonsense. To see just how intelligent AI systems are, a team of artificial and natural knowledge researchers at the University of Illinois as Chicago (UIC) subjected ConceptNet 4 to the verbal portions of the Weschsler Preschool and Primary Scale of Intelligence Test, which is a standard IQ test for young children. While the UIC researchers found that ConceptNet 4 is on average about as smart as a four-year-old child, the system performed much better at some portions of the test than others. “All of us know a huge number of things,” says Sloan. Source: UIC