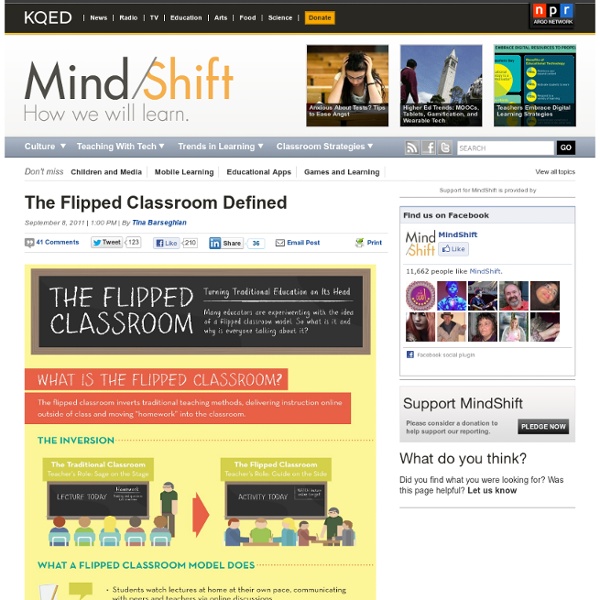 The Flipped Classroom Model: A Full Picture Due to Khan Academy’s popularity, the idea of the flipped classroom has gained press and credibility within education circles. Briefly, the Flipped Classroom as described by Jonathan Martin is: Flip your instruction so that students watch and listen to your lectures… for homework, and then use your precious class-time for what previously, often, was done in homework: tackling difficult problems, working in groups, researching, collaborating, crafting and creating. Isaac Asimov on the Thrill of Lifelong Learning, Science vs. Religion, and the Role of Science Fiction in Advancing Society by Maria Popova “It’s insulting to imply that only a system of rewards and punishments can keep you a decent human being.” Isaac Asimov was an extraordinary mind and spirit — the author of more than 400 science and science fiction books and a tireless advocate of space exploration, he also took great joy in the humanities (and once annotated Lord Byron’s epic poem “Don Juan”), championed humanism over religion, and celebrated the human spirit itself (he even wrote young Carl Sagan fan mail).

Awesome Chart Comparing Traditional Versus 21st Century Learning February 4, 2015 In his classic book “Education and Experience” John Dewey talks about the dichotomy between traditional and progressive forms of education saying that such a dichotomy polarizes discussions around educational matters. Dewey, instead, argued for an experience-based model that builds on the drawbacks and strengths of both models to form a holistic conceptualization of what a student-centred education should be like. Today, as I stumbled upon this beautiful chart on Mindhsift’s Facebook page I could not help but connect it to Dewey’s discussion of experiential and progressive learning. What in the chart is labelled 21st century learner is in fact the kind of learner Dewey theorized in his work more than half a century ago.

The Flipped Classroom: Explanation & Resources The flipped classroom model, in which traditional teaching methods and the order of a student’s day are basically reversed to make use of resources online and/or outside of class while moving what we know as traditional “homework” into actual classroom time, has been slowly gaining steam around the country since its unofficial inception in 2004, but the recent onslaught of high quality educational resources being released from the likes of Khan Academy, MIT, and others has really kicked the movement into high gear. What is the flipped classroom model? Does it work? Take a look at a collection of articles and resources below. Background on the flipped classroom: Learners Should Be Developing Their Own Essential Questions Having essential questions drive curriculum and learning has become core to many educators’ instructional practices. Grant Wiggins, in his work on Understanding By Design, describes an essential question as: A meaning of “essential” involves important questions that recur throughout one’s life. Such questions are broad in scope and timeless by nature. They are perpetually arguable – What is justice? Is art a matter of taste or principles?

Faire la classe mais à l’envers : la «flipped classroom»: Service de soutien à la formation Accès rapides UdeS en bref Direction Practice-based professional learning The range of concerns may be seen, for example, in the UK Open University's practice-based professional learning centre,[1] one of the Higher Education Funding Council for England's centres for excellence in teaching and learning.[2] Its interests cover the inter-relation of various forms of professional knowledge, ways of fostering them and their co-ordination, workplaces as sites of learning, the assessment of practice-based learning achievements, and the use of modern technologies to support distributed learning. Other centres for excellence occupy some or all of the territory, notably the Professional Development Unit at the University of Chester,[3] SCEPTrE in the University of Surrey,[4] CEPLW in the University of Westminster[5] and NCWBLP in Middlesex University.[6] Interest in this territory is not confined to the UK, with some of the most respected work associated with David Boud at the University of Technology, Sydney, NSW.[7] See also[edit] Reflective practice

The 30 Second Habit That Can Have a Big Impact On Your Life  There are no quick fixes. I know this as a social science junkie, who’s read endless books and blogs on the subject, and tried out much of the advice — mostly to no avail. So I do not entitle this post lightly. And I write it only having become convinced, after several months of experimentation, that one of the simplest pieces of advice I’ve heard is also one of the best. It is not from a bestselling book — indeed no publisher would want it: even the most eloquent management thinker would struggle to spin a whole book around it. Nor is it born out of our world of digital excess and discontent.