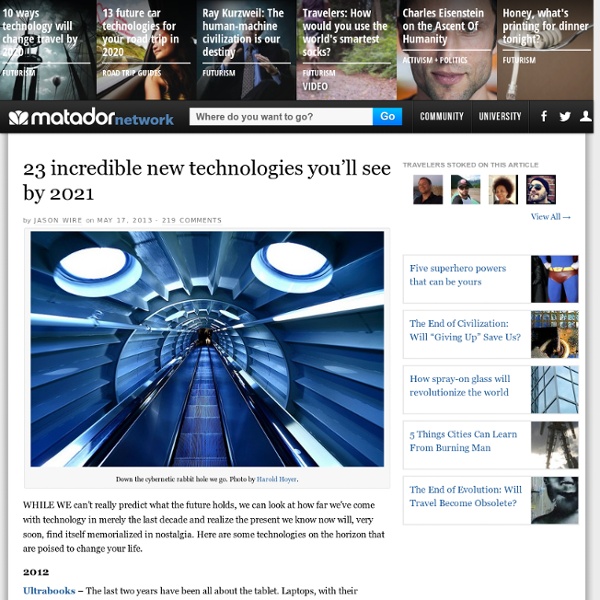 What Humans Are Really Doing to Our Planet, in 19 Jaw-Dropping Images Last week, Pope Francis and church officials encouraged everyone to consume less and think more about our impact on the environment. It's a timely warning because the next six months will be critical to our future. Ahead of a series of major events later this year, The Foundation for Deep Ecology and the Population Media Center released a collection that illustrates the devastating effects of out-of-control growth and waste, and it's breathtaking. New invisibility cloak hides objects from human view Public release date: 27-Jul-2011 [ Print | E-mail Share ] [ Close Window ] Contact: Michael Bernsteinm_bernstein@acs.org 202-872-6042American Chemical Society

List of emerging technologies Agriculture[edit] Biomedical[edit] Displays[edit] Electronics[edit] Energy[edit] IT and communications[edit] 15 Awesome Chemistry Experiments You don’t need to watch Breaking Bad to know that chemistry is pretty awesome. Below we explore our favorite 15 chemistry GIFs. Melting Metal With Magnets The Science: The copper wire has a significant amount of AC electricity running through it, causing it to act like a really strong electromagnet. In the metal slug, eddy currents form due to the magnetic field the copper wire is causing while the copper wire has high frequency AC flowing through it. The metal slug’s electric resistance causes a portion of the electric energy to turn into heat, but the heat builds up until the metal slug becomes white hot and melts.

Scientists close in on Higgs boson 'God particle' Scientists are expected to announce they may have caught their first glimpse of the Higgs boson, a curious subatomic particle long thought to underpin the microscopic workings of nature. Hundreds of physicists will crowd into a seminar room at Cern, the European particle physics laboratory near Geneva, on Tuesday, to hear the latest in the hunt for the particle, while thousands more are expected to watch online. The Higgs boson, or so-called God particle, has become the most coveted prize in particle physics since it was postulated in the mid-1960s.

10 Psychological Experiments That Went Horribly Wrong Psychology as we know it is a relatively young science, but since its inception it has helped us to gain a greater understanding of ourselves and our interactions with the world. Many psychological experiments have been valid and ethical, allowing researchers to make new treatments and therapies available, and giving other insights into our motivations and actions. Sadly, others have ended up backfiring horribly — ruining lives and shaming the profession.

10 Incredible Cutting-Edge Technologies In Development Technology Don’t give up on flying cars or hoverboards just yet! As technology marches relentlessly on, everything goes into development sooner or later—as demonstrated by the existence of these things, which we’ll almost certainly see within our lifetimes. 10 Artificial Gills Inventors have long sought an underwater breathing apparatus that doesn’t store oxygen, but extracts it from the water the way gills do.

Junior Science & Humanities Symposium March 6-8, 2014 Hosted by: The University of Nevada Reno Lodging will be at: Circus Circus Reno Hotel, 500 North Sierra Street Reno, NV 1-800-992-2694 Activities will be provided by: The University of Nevada Reno, The Nevada Mining Association, and The Desert Research Institute JSHS is a three-day event which is held annually on a university campus, and provides high school students with the opportunity to: Congo research - The First Zombie-Proof House - All That Is Interesting - StumbleUpon Somehow, ritual drunk-conversation concerning team captains for the apocalypse has become a major part of the lives of 20-somethings. Having been matured in the Grandaddy-crowned masterpiece film (put “A.M. 180” on and forget that you have a job) 28 Days Later and the best-selling Zombie Survival Guide, we’re all a little too ready to deal with the 2012 zombie apocalypse of our dreams. “The Safe House,” designed by KWK Promes, starts to get eerily close to something I could work with, if say 200 bludgeoned members of the undead army came over to eat their way into borrowing some sugar. “The most essential item for our clients was acquiring the feeling of maximum security,” begins the designers’ website in the summary of the structure. Who wouldn’t feel safe in a concrete rectangle that folds in upon itself to become completely sealed? Even the windows are covered with a slab of concrete when the structure is on nap time.

Need Some Motivation Right Now? Read This IMMEDIATELY If you’re in desperate need of some motivation, we’re going to fix that problem, right here, right now. Prepare yourself. WARNING: I’m going to swear and yell a little in this post. Desperate times call for desperate measures. You said you needed motivation.

I welcome any advancements in transport to help out with Indian congestion, even if it is a snails pace. I would like to see it developed before the end of the century though! by mattwilson Nov 3

yup. true.. Bangalore Metro is trying to solve it, but the snail's pace it gets developed it would be my grandchildren who'd benefit from them. by arzvi Nov 3

Well, for that we'd need some sort of high speed, high volume underground net work of some kind! Perhaps trains under the city! Honestly, its never going to go away and as the population grows and India becomes more liberal (if that is the way it goes) its likely to only get worse. Lets just hope the Indian Drivers become a little less 'Agressive'! by mattwilson Nov 3

But when will the traffic congestion of Indian cities go away? by arzvi Nov 3