An Interactive Infographic Maps The Future Of Emerging Technology 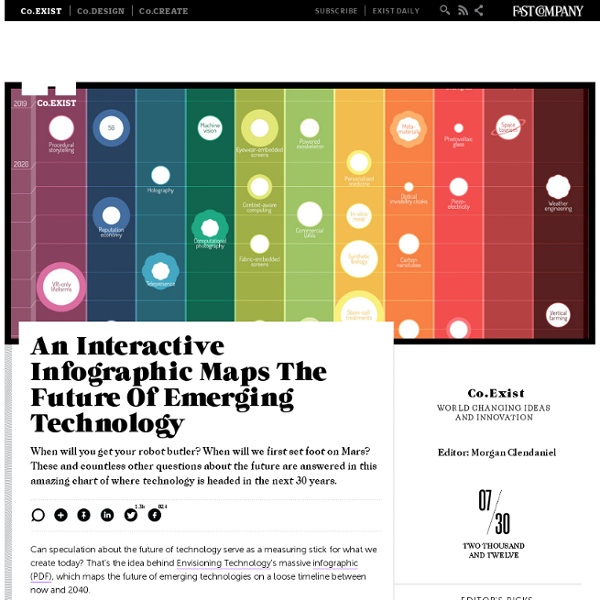 Can speculation about the future of technology serve as a measuring stick for what we create today? That’s the idea behind Envisioning Technology's massive infographic (PDF), which maps the future of emerging technologies on a loose timeline between now and 2040. Click to enlarge. On it you’ll find predictions about everything from artificial intelligence and robotics to geoengineering and energy. In 30 years, it will also be a great reference for where we thought we might end up. You can download a PDF for free, or--should you want to track our progress toward artificial photosynthesis and space-based solar power by X-ing out accomplishments on your wall--purchase a poster version here. Related:  Art & Technology

Data Mining Image: Detail of sliced visualization of thirty video samples of Downfall remixes. See actual visualization below. As part of my post doctoral research for The Department of Information Science and Media Studies at the University of Bergen, Norway, I am using cultural analytics techniques to analyze YouTube video remixes. The following is an excerpt from an upcoming paper titled, “Modular Complexity and Remix: The Collapse of Time and Space into Search,” to be published in the peer review journal AnthroVision, Vol 1.1. The excerpt below is rather extensive for a blog post, but I find it necessary to share it in order to bring together elements discussed in previous posts on Remix and Cultural Analytics (see part 1 on the Charleston Mix, part 2 on Radiohead’s Lotus Flower, and part 3 on the Downfall parodies). The following excerpt references sliced visualizations of the three cases studies in order to analyze the patterns of remixing videos on YouTube.

57% of people will be working remotely this summer | techbubblestechbubbles By Daniel Hunter, Fresh Business Thinking Survey results released from Telligent, the leading enterprise collaboration and community software company, find that 74% of UK employees say a social collaboration platform would be valuable for using in workplace communications. However, 79% of workplaces do not provide such tools, based on a survey of 1,000 UK employees, conducted by Redshift Research. The survey found that 62% of employees report regularly working with team members remotely or in different locations. Today’s availability of wireless Internet and Internet-enabled mobile devices has helped transform people’s work lives into a new, dynamic, 24/7, ‘work anywhere’ culture. Furthermore, the sporting events set to take place in London this summer are set to impact more than half (52%) of UK employees’ working lives, with 57% stating that they will be working remotely this summer. Google+ Related posts:

Florida Institute for Human and Machine Cognition (IHMC) How Do You Create A Culture Of Innovation? This is the third part in a series by Scott Anthony, author of The Little Black Book Of Innovation. It sounds so seductive: a “culture of innovation.” The three words immediately conjure up images of innovation savants like 3M, Pixar, Apple, and Google--the sorts of places where innovation isn’t an unnatural act, but part of the very fabric of a company. While culture is a complicated cocktail, four ingredients propel an organization forward: the right people, appropriate rewards and incentives, a common language, and leadership role-modeling. The Innovator’s DNA Has Four Components If you ask most people what makes a great innovator, the most common response is innate gifts from parents or a higher power. At the core is what the professors call “associational thinking.” Questioning: Asking probing questions that impose or remove constraints. Most organizations have people who follow these behaviors--even if they aren’t immediately obvious to senior leadership. Then it dawned on me.

The Singularity Is Near The Singularity Is Near: When Humans Transcend Biology is a 2005 non-fiction book about artificial intelligence and the future of humanity by inventor and futurist Ray Kurzweil. This is his first book to embrace the Singularity as a term, but the ideas contained within are derived from his previous books, the The Age of Spiritual Machines (1999) and The Age of Intelligent Machines (1990). Kurzweil describes his law of accelerating returns which predicts an exponential increase in technologies like computers, genetics, nanotechnology, robotics and artificial intelligence. He says this will lead to a technological singularity in the year 2045, a point where progress is so rapid it outstrips humans' ability to comprehend it. Irreversibly transformed, people will augment their minds and bodies with genetic alterations, nanotechnology, and artificial intelligence. Content[edit] Exponential growth[edit] Computational capacity[edit] Moore's Law The brain[edit] Exponential Growth of Computing

With mobile tech, mapping a city’s emotions, memories PHILADELPHIA -- What can technologies do for us to help us understand what's going on in the city? University of Pennsylvania urban planning professor Amy Hillier took to the stage here at the second annual TEDxPhilly conference on Tuesday to demonstrate how technology could one day help us look beyond statistics to visualize the very experience of a city. "Could we map emotion? Memory? Today's geographic information system, or GIS, technology allows us to map the visible city -- streets, sidewalks, buildings -- that we see when we walk around. "Once upon a time, this was magnificent," Hillier said. But what does the city look like beneath the surface? "The city I'm interested in is the city we don't see," Hillier said. But the third step, arguably the most important, is the one that no one can see but everyone can feel: the societal impact of those other layers. "Neighborhoods shape us, and we also shape our neighborhoods," she said. How does race or income affect your opportunities?

VCs' next big things: Big data, drugs, and education | Internet & Media SANTA CLARA, Calif.--Some of Silicon Valley's greatest minds used an interesting piece of hardware to vote on which trends will rule the tech world: ping pong paddles. The Churchill Club, a business and technology forum, hosted discussion here Tuesday night, along with Forbes magazine, to pick the brains of Kevin Efrusy, Bing Gordon, Reid Hoffman, Steve Jurvetson, and Peter Thiel. With a few hundred people seated in the grand ballroom of the Hyatt Regency Santa Clara, each investor presented his case for two ideas for what he thought would be a dominating tech trend for the next five years. Each held up a ping pong paddle to show whether he agreed -- green for yes and red for no. The pitches were accompanied by approval ratings collected via green and red cards at attendees' tables and a survey done by TwitPolls.com, a Twitter polling service. Gordon's digitalization of education also hit a high note. "For digital natives, public schools are jails," Gordon said. Corrected at 1:45 a.m.

Japanese Scientists Create Touchable Holograms // Current To Our Faithful Current.com Users: Current's run has ended after eight exciting years on air and online. The Current TV staff has appreciated your interest, support, participation and unflagging loyalty over the years. Your contributions helped make Current.com a vibrant place for discussing thousands of interesting stories, and your continued viewership motivated us to keep innovating and find new ways to reflect the voice of the people. We now welcome the on-air and digital presence of Al Jazeera America, a new news network committed to reporting on and investigating real stories affecting the lives of everyday Americans in every corner of the country. Thank you for inspiring and challenging us. – The Current TV Staff

Top ten global skill shortages Financial and budgetary, IT and green skills top the list of ten skills that Hays’ global offices and clients commonly identify as being in the greatest demand. “Talent shortages are a global problem,” said Charles Logan, Director at Hays. “We operate in 32 countries and these skills are the ones that our clients globally say are in most demand. For anyone considering their career options in our globalised economy, these are the skills to focus on. “Our list is broken down by “soft” and “hard” (job-specific) skills and it shows there is a common global perception that candidates do not have a sufficient standard of soft skills. In terms of hard skills, current economic circumstances and long-term demographic trends are driving demand.” Hays’ top ten global skills shortage list is: Soft skills• Languages: A common theme among sectors and countries is the need for additional language skills. About HaysHays plc (the "Group") is a leading global professional recruiting group.