Immortality only 20 years away says scientist 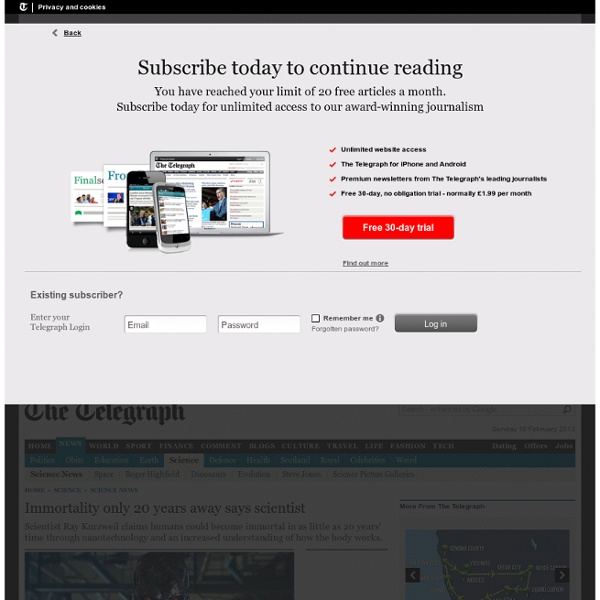 Related:  The Quest for Immortality

Leaving the Body Behind: A History ​Over the past week, Motherboard has tackled the question of whether or not the human body is becoming obsolete from a variety of angles, from immortality to killer robots. The very fact that we are able to realistically pose this question is itself a meaningful sign of the times, indicating that we may finally be on the threshold of abandoning the natural human body. As I wrote earlier this week, the pursuit of a better body has been going on for at least 40,000 years, and has manifested itself in everything from zoomorphic religious sculptures to the incredible capabilities of modern prosthetics.

Scientists Remotely Activate Genetic Target To Slow Aging Process AMP-activated protein kinase (AMPK) is an enzyme found in eukaryotic organisms and assists in regulating cellular energy levels. Low energy levels activate AMPK, which synthesizes ATP through fatty acid metabolism and increased glucose uptake. Fruit flies that had the gene activated in their intestines lived 30% longer, increasing their lifespan from an average six weeks to eight weeks. This increase didn’t just prolong the flies’ life, but also the quality of it as well. Walker’s team found that the longer-lived fruit flies remained healthier than their control counterparts. Google's AI bot says the purpose of living is 'to live forever' Synopsis Researchers at the company programmed an advanced type of "chatbot" that learns how to respond in conversations based on examples from a training set of dialogue. Summary

The AI Revolution: Our Immortality or Extinction Note: This is Part 2 of a two-part series on AI. Part 1 is here. PDF: We made a fancy PDF of this post for printing and offline viewing. Buy it here. (Or see a preview.) How aging cripples the immune system Thymus (credit: Wikimedia Commons) Aging cripples the production of new immune cells, decreasing the immune system’s response to vaccines and putting the elderly at risk of infection, but antioxidants in the diet may slow this damaging process. The problem is focused on an organ called the thymus, which produces T lymphocytes (a type of white blood cell) — critical immune cells that must be continuously replenished so they can respond to new infections. “The thymus begins to atrophy rapidly in very early adulthood, simultaneously losing its function,” said TSRI Professor Howard Petrie. “This new study shows for the first time a mechanism for the long-suspected connection between normal immune function and antioxidants.” How antioxidant enzyme deficiency leads to metabolic damage

Scientists reveal secrets for reaching age 100 (or more) Leukocyte (white blood cell) telomere length in study participants up to 115 years of age. Statistical regression lines belonging to these groups are indicated by the same color as the data. (credit: Yasumichi Arai et al./EBioMedicine) Scientists say they have cracked the secret of why some people live a healthy and physically independent life over the age of 100: keeping inflammation down and telomeres long. Newcastle University’s Institute for Ageing in the U.K. and Keio University School of Medicine note that severe inflammation is part of many diseases in the old, such as diabetes or diseases attacking the bones or the body’s joints, and chronic inflammation can develop from any of them. Transhumanist Party presidential candidate to drive ‘Immortality Bus’ across the U.S. (credit: Rachel Lyn) Don’t freak out if you see a 40-foot bus resembling a coffin sometime soon. It’s the “Immortality Bus” — a “pro-science symbol of resistance against aging and death” to be driven across the U.S. by futurist and 2016 Transhumanist Party presidential candidate Zoltan Istvan, along with scientists and supporters.

Self/Less movie features uploading … to an existing human body In Self/Less, a science-fiction thriller to be released in the U.S. today, July 10, 2015, Damian Hale, an extremely wealthy aristocrat (Ben Kingsley) dying from cancer, undergoes a $250 million radical medical procedure at a lab called Phoenix Biogenic in Manhattan to have his consciousness transferred into the body of a healthy young man (Ryan Reynolds). (credit: Hilary Bronwyn Gayle / Gramercy Pictures) But when he starts to uncover the mystery of the body’s origin — he has flashbacks in a dream of a former life as Mark — he discovers the body was not grown in a laboratory, as promised, and that the “organization” he bought the body from will kill to protect its investment. To make matters worse, he faces the threat of losing control of the body he now possesses and its original owner’s consciousness resurfacing, which will erase his mind in the process. (credit: 2045 Strategic Social Initiative)

Scientists Develop Eye Drops That Could Cure Cataracts In Brief A revolutionary drug that is administered via eye drops can shrink and dissolve cataracts. Optimal Vision Cataracts, known to be the leading cause of blindness in humans, may soon be cured via a simple eye drop. BioViva tests gene therapy to reverse biological aging In Brief The announcement serves as the first time that a company will try multiple therapies in one person in an attempt to reverse the biological aging process The Breakthrough