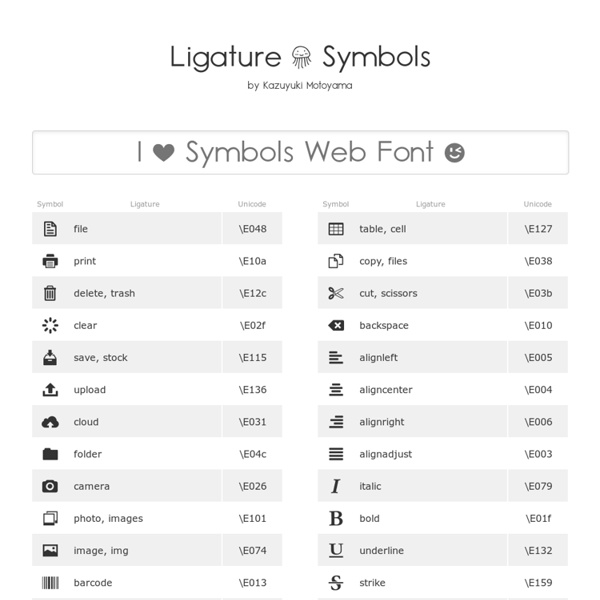 by Kazuyuki Motoyama Logos Please copy & paste this code to your HTML file or Stylesheet. <! Download How to make this font ? Ligature Symbols is to display the symbol with a ligature features. About me Copyright © 2012 kazuyuki motoyama (kudakurage)

Beautiful Buttons for Twitter Bootstrappers This is an extension to the Twitter Bootstrap framework. It makes creating pretty buttons easy. (Send improvements to @charliepark.) First, monkey with the sliders on the left. Use your arrow keys for extra precision. (Button Puffiness might not affect all browsers.) Second, copy the CSS in the box below. You should be able to just pop it into your CSS file.

How to Center Layers in Photoshop - Web Development Stuff Posted in Graphics, How-To on Jun 23rd, 2009 | 22 responsesTagged as photoshop Do you seem that some image is not exactly centered as you wish? Should be 5 pixels left or about 7 pixels upper? Before we start, I would like to focus your attention on the right upper History panel to follow all actions done by every single step. Well, let’s have a situation: very friendly and cute looking smiley should be exactly centered in the 500×500 pixels blank image. Now, make layer from Background of the newly created blank image by double click on it, in the right lower Layers tab. Following step is pretty simple – drag our friendly smiley over the newly created image and drop wherever you want. This is going to be the key step. Once Layer 0 is rectangulary marked, select Layer 1 (the smiley) and go to the Layer > Align Layers to Selection tab of the top main menu. Select Vertical Centers and you’ll get your nice smiley centered verticaly in the Layer 0 as shown below.

36 High-Quality Flat Design Resources In contrast to skeuomorphic design, flat design focuses on simple shapes, colors and typography to emphasize clarity and usability. It was a term coined by Allan Grinshtein of LayerVault in his post "The Flat Design Era," published last year. The release of iOS 7 proved flat design is no longer a passing fad, but rather a step forward. The flatness of style means simplifying interface elements, removing extraneous elements and decoration — such as bevels, gradients and textures — to create a crisp, clean design that focuses on hierarchy. To help you get started with flat design, we have compiled 36 beautifully designed premium and free UI PSD kits, each featuring a variety of interface components and elements for use in your projects. Are there any flat design UI kits you would recommend? 1. Flat UI Pro is based on Twitter Bootstrap and designed in a flat style, containing a large number of basic components, icons and glyphs. 2. 3. 4. 5. 6. 7. 8. 9. 10. 11. 12. 13. 14. 15. 16. 17. 18.

20 Incredibly useful tools and resources for Web designers When it comes to Web design, the tools you use play an integral part in your results. Of course, we’re big fans of getting down to the basics, like putting pencil to paper, but sometimes finding new apps and resources can help you get those creative juices flowing. Check out our list of 25 incredibly useful tools and resources for designers and developers below. 1. Niice essentially operates as a design search engine, pulling in results from Behance, Dribbble and Designspiration. 2. Pixel Dropr is a Photoshop plugin created by UI Parade which allows designers to create collections of icons, illustrations, photos, buttons and other elements that can be dragged and dropped to any PSD file. 3. If you’re a Hacker News reader, you already know how Designer News works. 4. Firefox has added a new typography-centric tool called the “Font Inspector” to its DevTools, available now in the browser’s Nightly Build. 5. 6. 8. This Web app is a simplistic as it sounds. 9. 10. 11. 12. 13. 14. 15. 16.