How To Permanently Delete Your Account on Popular Websites - Smashing Magazine 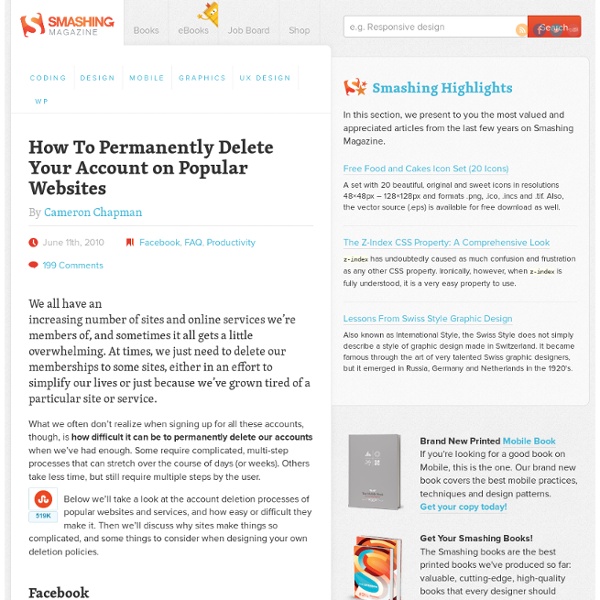 Advertisement We all have an increasing number of sites and online services we’re members of, and sometimes it all gets a little overwhelming. At times, we just need to delete our memberships to some sites, either in an effort to simplify our lives or just because we’ve grown tired of a particular site or service. What we often don’t realize when signing up for all these accounts, though, is how difficult it can be to permanently delete our accounts when we’ve had enough. Some require complicated, multi-step processes that can stretch over the course of days (or weeks). Others take less time, but still require multiple steps by the user. Below we’ll take a look at the account deletion processes of popular websites and services, and how easy or difficult they make it. Facebook Difficulty (on a scale of 1-5, 5 being hardest): 5 Deleting a Facebook account is a bit more complicated than many other services. Then you can use the form found here to request deletion. Twitter Difficulty: 2 MySpace

Anonymouse.org AnonWWW Many mice surf the web under the illusion that their actions are private and anonymous. Unfortunately, this is not the way it is. Every time you visit a site for a piece of cheese, you leave a calling card that reveals where you are coming from, what kind of computer you use, and other details. How to protect your Facebook account from Rogue Applications A rogue application is a Facebook application developed by someone with fraudulent or deceitful intentions. The application often doesn’t perform its stated objectives. They are designed to obtain account information of the user, and they can be used to spread spam, scams or other malware to friends of the infected account. Typical examples are: Profile Viewer AppsApps that redirect to phishing links and formsApps that lead to malicious downloadsApps that lead to survey scams The best way to guard against rogue applications is to avoid any third-party Facebook applications entirely.

Online Portfolio Tools Much of this work began with my Online Portfolio Adventure, where I recreated my presentation portfolio with at least 33 different online services, software and strategies between September 2004 and the present time. In 2006, I began exploring the use of Web 2.0 tools, and constructed portfolios using these tools. One advantage of Web 2.0 tools is that many of them are free, although WikiSpaces may place ads on the page. There is some concern about security in a K-12 school environment, so care should be taken when using these tools with children. In a recent blog entry, I discussed different Online Portfolio Strategies and developed a GoogleDocs page to compare a few of the different choices available.

Free TiVo: Build a Better DVR out of an Old PC by Ken Sharp April 25, 2005 Digital Video Recorders (DVRs) have become a necessary luxury over the last several years. Millions of people rely on these devices to pause and rewind live television, and to keep track of broadcast schedules and record programs for them.

Microsoft Online Surveillance Guide - Cryptome Leak Cryptome, a whistleblower site that regularly leaks sensitive documents from governments and corporations, is in hot water again: this time, for publishing Microsoft’s “Global Criminal Compliance Handbook,” a comprehensive, 22-page guide running down the surveillance services Microsoft will perform for law enforcement agencies on its various online platforms, which includes detailed instructions for IP address extraction. You can find the guide here (warning: PDF). not anymore. Microsoft has demanded that Cryptome take down the guide — on the grounds that it constitutes a “copyrighted [work] published by Microsoft.” Yesterday, at 5pm, Cryptome editor John Young received a notice from his site’s host, Network Solutions, bearing a stiff ultimatum: citing the Digital Millenium Copyright Act (DMCA), Network Solutions told him that unless he takes the “copyrighted material” down, they will “disable [his] website” on Thursday, February 25, 2010. So far, Young refuses to budge.

‘Friends’ can share your Facebook profile with the government, court rules A federal judge has ruled that investigators can go through your Facebook profile if one of your friends gives them permission to do so. The decision, which is part of a New York City racketeering trial, comes as courts struggle to define privacy and civil liberties in the age of social media. In an order issued on Friday, US District Judge William Pauley III ruled that accused gangster Melvin Colon can’t rely on the Fourth Amendment to suppress Facebook evidence that led to his indictment. Colon had argued that federal investigators violated his privacy by tapping into his profile through an informant who was one of this Facebook friends. The informant’s Facebook friendship served to open an online window onto Colon’s alleged gangster life, revealing messages he posted about violent acts and threats to rival gang members. The government used this information to obtain a search warrant for the rest of Colon’s Facebook account.

6 Things I Bet You Didn’t Know You Could Do with Google Some of the tips below are effortless to implement and save you a lot of time and energy when dealing with these issues. Let’s start with the first proof of the awesomeness of Google… 1. Create unlimited disposable email addresses with Gmail If you add dots (.) between the letters of your Gmail username, sending an message to the new username will get forwarded to your original email (which is without or with only 1 dot.) For example:

Can the NSA and CIA use your phone to track your location? July 26, 2011, 12:43 PM — There's no need to panic, or start shopping for aluminum-foil headwear, but the super-secret National Security Agency has apparently been thinking frequently enough about whether the NSA is allowed to intercept location data from cell phones to track U.S. citizens that the agency's chief lawyer was able to speak intelligently about it off the cuff while interviewing for a different job. "There are certain circumstances where that authority may exist," even if the NSA has no warrant to investigate a the person whose privacy it is invading or global permission to eavesdrop on everyone, according to Matthew Olsen, the NSA's general counsel. He didn't come to talk about that particularly; he said it yesterday in response to a question from the Senate Select Committee on Intelligence, which was considering whether he'd be a good choice to run the National Counterterrorism Center. So far, though, no law.

How to Lock Down Facebook Privacy Facebook privacy settings are complex and, to make things more difficult, they change on a regular basis. We explored how to lock down your Facebook account's privacy settings, for both your public profile and under the hood. Follow this simple step-by-step process to make sure you're not sharing anything outside your comfort zone. Taking some time to lock down your Facebook privacy settings is a good idea. The 35 Best Web 2.0 Classroom Tools Chosen By You If you’re not an avid follower of #edchat on Twitter, you may be missing out on a great opportunity to learn about some new Web 2.0 tools that are currently being used in classrooms around the world. That’s because @chickensaltash posed a simple question to the PLN and there has been a huge swell of support as hundreds of people have jumped in to answer the question about which 5 Web 2.0 tools teachers are using in classrooms. The Best of the Best You can view the live stream of #edchat here and see what people are saying at the hashtag #chickenweb2tools here.

10 Search Engines to Explore the Invisible Web No, it’s not Spiderman’s latest web slinging tool but something that’s more real world. Like the World Wide Web. The Invisible Web refers to the part of the WWW that’s not indexed by the search engines. ‘MegaSearch’ Aims to Index Fraud Site Wares A new service aims to be the Google search of underground Web sites, connecting buyers to a vast sea of shops that offer an array of dodgy goods and services, from stolen credit card numbers to identity information and anonymity tools. MegaSearch results for BIN #423953 A glut of data breaches and stolen card numbers has spawned dozens of stores that sell the information. The trouble is that each shop requires users to create accounts and sign in before they can search for cards. Enter MegaSearch.cc, which lets potential buyers discover which fraud shops hold the cards they’re looking for without having to first create accounts at each store.