CPDP PROGRAM. Video recording of panels. Law enforcement and internet jurisdiction. Anonymization. 15-01-23_CPDP_concluding_remarks_GB_EN.pdf. BYTE_Big-data-breakfast-summary-report.pdf. Privacy and Security Mirrors. Work package 1 – Developing a common research framework For most citizens, the meaning of privacy and security seems obvious because they have an implicit feeling about them that some may call “common sense”. 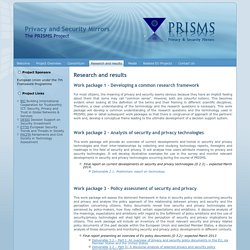 However, both are colourful notions. This becomes evident when looking at the definition of the terms and their framing in different scientific disciplines. Therefore, a clear understanding of the terminology and the research questions is necessary. This work package will develop a common understanding of the research questions and the terminology used in PRISMS; plan in detail subsequent work packages so that there is congruence of approach of the partners’ work and, develop a conceptual frame leading to the ultimate development of a decision support system.

Tweets around the event

EU DP draft regulation - Privacy Laws & Business. Vote on EU DP proposals now delayed Please login or register to see this full article. 10/05/2013 by: The lead rapporteur for the European Parliament’s Committee on Civil Liberties, Justice and Home Affairs (LIBE) announced at a LIBE meeting on 6 May that the committee’s vote on the draft DP Regulation will be delayed due to around 3,000 amendment... 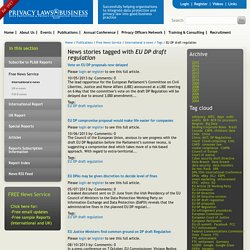 Bigger Than Big Data, Processed Information is Gold. Catching up with the annual CDPD conference in Brussels. Digital Rights sessions at the CPDP Conference - EDRi. Information society, privacy and data protection. Albrech optimistic about 2015 deadline for EU DP Regulation - Privacy Laws & Business. Jan Albrecht, MEP and data protection rapporteur at the European Parliament on the draft EU DP Regulation is optimistic about the Council reaching its negotiating position by this summer. 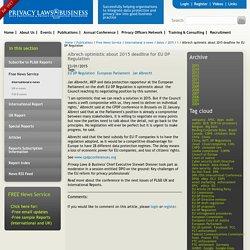 "I am optimistic that we can reach a solution in 2015. But if the Council wants a swift compromise with us, they need to deliver on individual rights," Albrecht said at the CPDP conference in Brussels on 22 January. Albrect said that as the Parliament's position is already a compromise between many stakeholders, it is willing to negotiate on many points but now the parties need to talk about the detail, not go back to the principles. No legislation will ever be perfect but it is urgent to make progress, he said. Albrecht said that the best subsidy for EU IT companies is to have the regulation adopted, as it would be a competitive disadvantage for Europe to have 28 different data protection regimes. See www.cpdpconferences.org. CPDP Conference 2015: Demonstrating Accountability. Date: Thursday, January 22, 2015 | Time: 8:45am Location: Grande Halle - Brussels, Belgium. 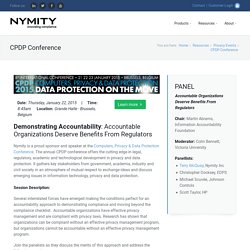 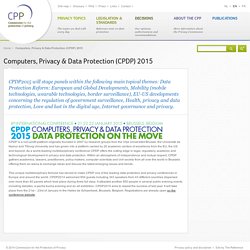 CPDP is a non-profit platform originally founded in 2007 by research groups from the Vrije Universiteit Brussel, the Université de Namur and Tilburg University and has grown into a platform carried by 20 academic centers of excellence from the EU, the US and beyond. Tweets about #CDPD2015 hashtag on Twitter. Law Square contributing to top summit CDPD 2015 - Law Square. Degrading security diminishes privacy - ISACA Now. Forget, erase and delist, but don’t forget the broader issue. Current state of affairs A new year, a new CPDP Conference (Computers, Privacy & Data Protection, 21-23 January 2015). 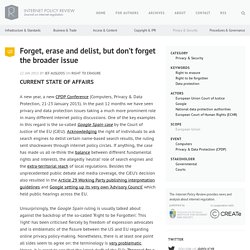 In the past 12 months we have seen privacy and data protection issues taking a much more prominent role in many different internet policy discussions. One of the key examples in this regard is the so-called Google Spain case by the Court of Justice of the EU (CJEU). Acknowledging the right of individuals to ask search engines to delist certain name-based search results, the ruling sent shockwaves through internet policy circles. If anything, the case has made us all re-think the balance between different fundamental rights and interests, the allegedly ‘neutral’ role of search engines and the extra-territorial reach of local regulations. Unsurprisingly, the Google Spain ruling is usually talked about against the backdrop of the so-called ‘Right to be Forgotten’. 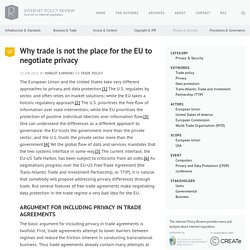 First, trade agreements attempt to lower barriers between regimes and reduce the friction inherent in conducting transnational business. Thus trade agreements already contain many attempts at regulatory harmonisation, or at least constructing interfaces between regulatory regimes. There is an exception to regulatory harmonisation at the World Trade Organisation that specifically addresses privacy, but a new free trade agreement could negotiate around this exception.[7] Second, trade agreements do involve a more formal negotiating process than, say, the Safe Harbor. If a more extended process leads to consensus building, then perhaps the EU and the US could arrive at a better compromise through trade. Transborder Data Flows and Data Privacy Law: Hardback: Christopher. Computers, Privacy & Data Protection. Organised by Privacy Salon vzw and Restart vzw. 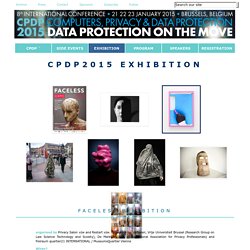 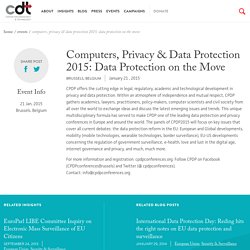 Within an atmosphere of independence and mutual respect, CPDP gathers academics, lawyers, practitioners, policy-makers, computer scientists and civil society from all over the world to exchange ideas and discuss the latest emerging issues and trends. Addressing the right to privacy in 2015. One of the concrete ways in which internet users can exercise their right to privacy is through the use of encrypted communications, which can provide some guarantee of confidentiality in an environment of pervasive digital surveillance. 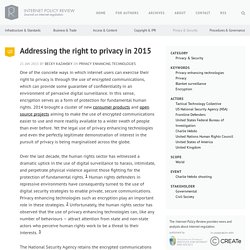 In this sense, encryption serves as a form of protection for fundamental human rights. 2014 brought a cluster of new consumer products and open source projects aiming to make the use of encrypted communications easier to use and more readily available to a wider swath of people than ever before. Yet the legal use of privacy enhancing technologies and even the perfectly legitimate demonstration of interest in the pursuit of privacy is being marginalised across the globe. Over the last decade, the human rights sector has witnessed a dramatic uptick in the use of digital surveillance to harass, intimidate, and perpetrate physical violence against those fighting for the protection of fundamental rights.

“European data protection authorities are too focussed on individual cases and can’t see the bigger picture,” she said. “If you rely entirely on complaints, you will always focus on consumer-facing companies and I think that’s a problem.” “We at the FTC get our cases from all sources including newspaper articles or even competitors,” continued Brill. IAPP Newsletter. IAPP. @THD_IT: #CPDP2015 Typical US Strategy: if you do understand this slide at first view, you win the War.

@EUstaran: And #CPDP2015 is off! Starting with a Big Bang like a James Bond movie: Implications of CJEU data retention decision. @atomsoffice: Listening to a debate on balancing economic use of #data vs #privacy at #cdpd2015 Protect Americans' Privacy! @CPDPconferences: The @EPICprivacy Champion of Freedom Award for Philip Zimmermann and Peter Hustinx #CPDP2015.

@Pripare4PbD: Congrats to @yodsamuel Junior Scholar Award #CPDP2015: Right of Reply as alternative to Right to be Forgotten #rtbf. @EUstaran: Wow. CJEU data retention decision impacts on other data-related initiatives according to Munster study at #CPDP2015. @EUstaran: Clever, concrete & constructive suggestions from Norwegian Consumer Council at #CPDP2015 on privacy protection. Publishers Know You Didn't Finish "The Goldfinch" — Here's What That Means Fo... Tools and tactics for your digital security. Dynamic Data Obscurity Panel at CPDP in Brussels 1/21/2015. Privacy Camp: Big data and ever increasing state surveillance - EDRi. By Kirsten Fiedler As every year, EDRi is co-organising a privacy camp for civil society as a warm-up event for the CPDP conference. The event will discuss big data and every increasing state surveillance and the sessions will focus on privacy and data protection challenges and possibilities in Europe.

It will take place on Tuesday, 20 January 2015 in Brussels. Please check the event page for the agenda and further details on Privacy Camp Brussels. The event will bring together digital rights advocates, members of NGOs and civil rights groups from all around Europe and beyond to discuss the problems currently facing human rights online and develop strategies to address the key challenges. This year’s program will kick off with a roundtable discussion on demystifying big data. Please R.S.V.P by no later than 17 January to imge.ozcan(at)vub.ac.be and note that non-NGO participation is by invitation only – participation is free of charge. Computers, Privacy & Data Protection. Offlinetags.