Takeover Whatsapp by Facebook: a curse or a blessing for privacy? Facebook already has an extraordinary position, regarding the information they are gathering from more than a billion users. 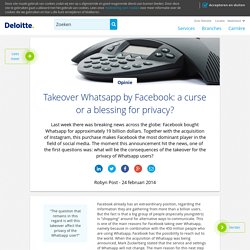 But the fact is that a big group of people (especially youngsters) is "shopping" around for alternative ways to communicate. This is one of the main reasons for Facebook taking over Whatsapp, namely because in combination with the 450 million people who are using Whatsapp, Facebook has the possibility to reach out to the world. When the acquisition of Whatsapp was being announced, Mark Zuckerberg stated that the service and settings of Whatsapp will not change.

The main reason for this next step is only "to make the world more open and connected". Talking about the "dark side" A more open and connected world can be a good thing in many ways, the fact that we are all sharing literally ANYTHING on Facebook, Instagram or Whatsapp is the living proof of that. The question that remains in this regard is will this takeover affect the privacy of the Whatsapp user?

Cybersecurity in 2015: What to expect. Information security and privacy are perennially hot topics, but as 2015 gets underway the temperature seems to be turned up particularly high. 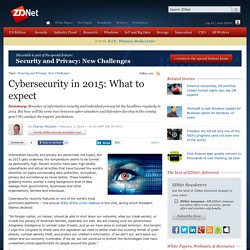 Recent months have seen high-profile cyberattacks and actual atrocities that have focused the world's attention on topics surrounding data protection, encryption, privacy and surveillance as never before. These headline-grabbing events overlay a rising background level of data leakage from governments, businesses and other organisations, families and individuals. Cybersecurity recently featured on one of the world's most prominent platforms -- the annual State of the Union Address in the USA, during which President Obama declared: "No foreign nation, no hacker, should be able to shut down our networks, steal our trade secrets, or invade the privacy of American families, especially our kids.

We are making sure our government integrates intelligence to combat cyber threats, just as we have done to combat terrorism. Top security breaches of 2014. ITRC_Breach_Stats_Report_2014.pdf. Fs-viewpoint-data-privacy-and-information-security.pdf. Privacy vs. Security. Throughout the semester in this blog, the authors will debate the trade-off between security and privacy. 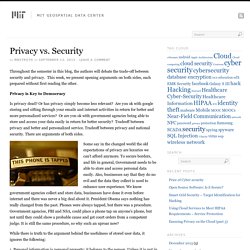 This week, we present opening arguments on both sides, each prepared without first reading the other. Privacy is Key to Democracy Is privacy dead? Or has privacy simply become less relevant? Are you ok with google storing and sifting through your emails and internet activities in return for better and more personalized services? Some say in the changed world the old expectations of privacy are luxuries we can’t afford anymore. While there is truth to the argument behind the usefulness of stored user data, it ignores the following: 1. 2. 3. 4. Modern Threats demand Modern Methods Life is full of trade-offs. The trade-off between privacy and security is one such issue, and a particularly difficult and sensitive one at that. “They that can give up essential liberty to obtain a little temporary safety deserve neither liberty nor safety.” 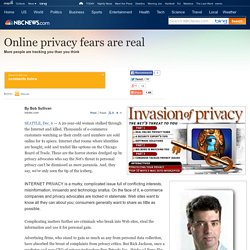 Thousands of e-commerce customers watching as their credit card numbers are sold online for $1 apiece. Internet chat rooms where identities are bought, sold and traded like options on the Chicago Board of Trade. These are the horror stories dredged up by privacy advocates who say the Net’s threat to personal privacy can’t be dismissed as mere paranoia. And, they say, we’ve only seen the tip of the iceberg.

INTERNET PRIVACY is a murky, complicated issue full of conflicting interests, misinformation, innuendo and technology snafus. Complicating matters further are criminals who break into Web sites, steal the information and use it for personal gain. Advertising firms, who stand to gain as much as any from personal data collection, have absorbed the brunt of complaints from privacy critics. “There are a lot more people tracking you than you think,” Jackson said. “Everybody points to advertising. Hot on Your Trail: Privacy, Your Data, and Who Has Access to It.