Berlin’s digital exiles: where tech activists go to escape the NSA. It’s the not knowing that’s the hardest thing, Laura Poitras tells me. 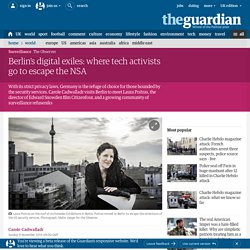 “Not knowing whether I’m in a private place or not.” Not knowing if someone’s watching or not. Though she’s under surveillance, she knows that. It makes working as a journalist “hard but not impossible”. It’s on a personal level that it’s harder to process. Poitras’s documentary about Edward Snowden, Citizenfour, has just been released in cinemas. Bad, not just for Snowden, I say? Business Insider. One of Google's top futurists, Vinton Cerf, said yesterday that "privacy may be an anomaly" and "it will be increasingly difficult for us to achieve privacy. 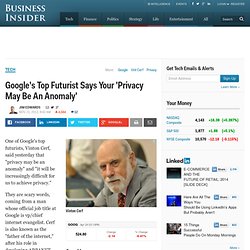 " They are scary words, coming from a man whose official job title at Google is vp/chief internet evangelist. Cerf is also known as the "father of the internet," after his role in developing ARPANET, the forerunner to the web. His remarks came during a speech he made at an FTC conference on the Internet of Things. We've reconstructed Cerf's remarks from a variety of sources. Historically, Cerf said, humans have had very little personal privacy. According to Network World: The issue of privacy was a hot one. Our Government Has Weaponized the Internet. Here's How They Did It. The internet backbone — the infrastructure of networks upon which internet traffic travels — went from being a passive infrastructure for communication to an active weapon for attacks. 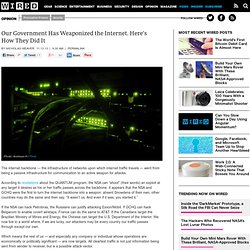 According to revelations about the QUANTUM program, the NSA can “shoot” (their words) an exploit at any target it desires as his or her traffic passes across the backbone. It appears that the NSA and GCHQ were the first to turn the internet backbone into a weapon; absent Snowdens of their own, other countries may do the same and then say, “It wasn’t us. News - Feds to monitor social media round-the-clock. Big Brother is watching you — on just about every social-media platform you can imagine. 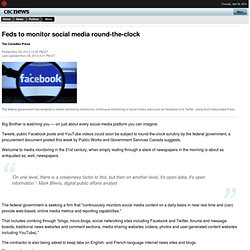 Tweets, public Facebook posts and YouTube videos could soon be subject to round-the-clock scrutiny by the federal government, a procurement document posted this week by Public Works and Government Services Canada suggests. Welcome to media monitoring in the 21st century, when simply leafing through a stack of newspapers in the morning is about as antiquated as, well, newspapers. 'On one level, there is a creepiness factor to this, but then on another level, it's open data, it's open information.'- Mark Blevis, digital public affairs analyst The federal government is seeking a firm that "continuously monitors social media content on a daily basis in near real time and (can) provide web-based, online media metrics and reporting capabilities. " The contractor is also being asked to keep tabs on English- and French-language internet news sites and blogs.

Tone and reach 'Early warning system' Social Media Monitoring: Feds To Keep Close Eye On Facebook Posts. OTTAWA - Big Brother is watching you — on just about every social-media platform you can imagine. 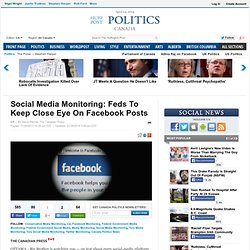 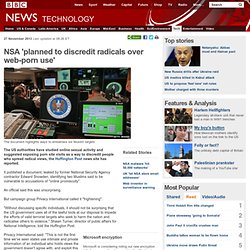 It published a document, leaked by former National Security Agency contractor Edward Snowden, identifying two Muslims said to be vulnerable to accusations of "online promiscuity". An official said this was unsurprising. But campaign group Privacy International called it "frightening". "Without discussing specific individuals, it should not be surprising that the US government uses all of the lawful tools at our disposal to impede the efforts of valid terrorist targets who seek to harm the nation and radicalise others to violence," Shawn Turner, director of public affairs for National Intelligence, told the Huffington Post. Continue reading the main story Microsoft encryption Washington Post. The Globe goes inside Canada’s top-secret spy agency. No cellphones, no recording devices, no computers. No names. The seven officials at the boardroom table insist that their identities cannot be published – the risk, one explains, is that they would become targets of a “hostile foreign intelligence service.”

Given the top-secret nature of their work, that request is understandable. That this conversation is taking place at all is unprecedented – and, to use one official’s word, “uncomfortable.” Outsiders rarely interact directly with professional spies at the Communications Security Establishment of Canada. Among them: that CSEC spied on Brazil’s energy sector; that it tracked devices that used wireless Internet at a Canadian airport; and that it collaborated nearly 300 times over the course of four years with domestic law-enforcement agencies.