Documents. Language of document : JUDGMENT OF THE COURT (Grand Chamber) (Personal data — Protection of individuals with regard to the processing of such data — Directive 95/46/EC — Articles 2, 4, 12 and 14 — Material and territorial scope — Internet search engines — Processing of data contained on websites — Searching for, indexing and storage of such data — Responsibility of the operator of the search engine — Establishment on the territory of a Member State — Extent of that operator’s obligations and of the data subject’s rights — Charter of Fundamental Rights of the European Union — Articles 7 and 8) In Case C‑131/12, REQUEST for a preliminary ruling under Article 267 TFEU from the Audiencia Nacional (Spain), made by decision of 27 February 2012, received at the Court on 9 March 2012, in the proceedings. 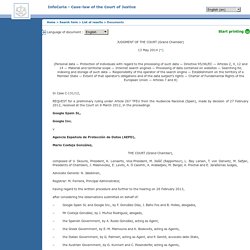 Google starts removing search results under 'right to be forgotten' rule. Move follows Court of Justice of the European Union's ruling last monthIt requires search services to remove information deemed 'inadequate, irrelevant or no longer relevant' - or face penaltiesGoogle has started removing search results of some names this weekUsers are alerted by a message that says results 'may have been removed'This warning appears on all results regardless of the name searched By Sarah Griffiths Published: 10:46 GMT, 26 June 2014 | Updated: 12:39 GMT, 30 June 2014. 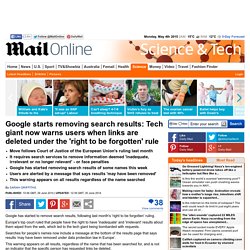 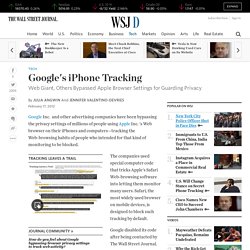 GOOG 0.54 % and other advertising companies have been bypassing the privacy settings of millions of people using Apple Inc. AAPL -0.19 % 's Web browser on their iPhones and computers—tracking the Web-browsing habits of people who intended for that kind of monitoring to be blocked. The companies used special computer code that tricks Apple's Safari Web-browsing software into letting them monitor many users. Safari, the most widely used browser on mobile devices, is designed to block such tracking by default. Google disabled its code after being contacted by The Wall Street Journal. The Google code was spotted by Stanford researcher Jonathan Mayer and independently confirmed by a technical adviser to the Journal, Ashkan Soltani, who found that ads on 22 of the top 100 websites installed the Google tracking code on a test computer, and ads on 23 sites installed it on an iPhone browser.

In a statement, Google said: "The Journal mischaracterizes what happened and why. Mr. Google to Pay $22.5 Million in FTC Privacy Settlement. Google Inc. 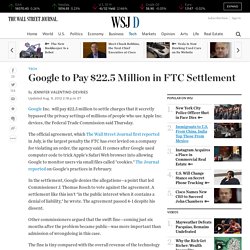 GOOG 0.54 % will pay $22.5 million to settle charges that it secretly bypassed the privacy settings of millions of people who use Apple Inc. devices, the Federal Trade Commission said Thursday. The official agreement, which The Wall Street Journal first reported in July, is the largest penalty the FTC has ever levied on a company for violating an order, the agency said. Google, FTC Near Settlement on Privacy. Google Inc. 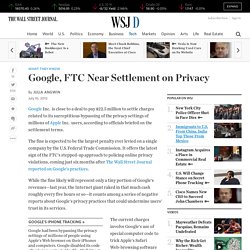 GOOG 0.54 % is close to a deal to pay $22.5 million to settle charges related to its surreptitious bypassing of the privacy settings of millions of Apple Inc. AAPL -0.19 % users, according to officials briefed on the settlement terms. The fine is expected to be the largest penalty ever levied on a single company by the U.S. Federal Trade Commission. It offers the latest sign of the FTC's stepped-up approach to policing online privacy violations, coming just six months after The Wall Street Journal reported on Google's practices. NSFW: Google Cancels Ban On Blogger Porn After Receiving 'A Ton' Of Angry Feedback. Google Hopes To Avoid Facebook Censorship Criticism In Removing NSFW Content From Blogger. Google has announced that, starting on March 23, it will no longer allow sexually explicit content on Blogger, its popular blog publishing service. 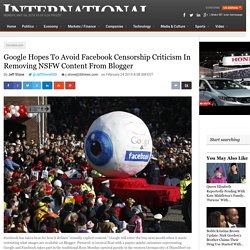 The move comes amid Google’s push for more family-friendly apps and also coincides with mounting criticism of Facebook’s policy on sexual images, which critics say is enforced unfairly. “If your existing blog doesn't have any sexually explicit or graphic nude images on it, you won't notice any changes,” Google said in a policy update. “If your existing blog does have sexually explicit or graphic nude images or video, your blog will be made private after March 23, 2015. No content will be deleted, but private content can only be seen by the owner or admins of the blog and the people who the owner has shared the blog with.”

Google’s New Open Source Privacy Effort Looks Back to the ’60s. Google Opposes Proposal to Ease Warrants for Computer Searches. Obama Heads to Tech Security Talks Amid Tensions. PALO ALTO, Calif. — will meet here on Friday with the nation’s top technologists on a host of cybersecurity issues and the threats posed by increasingly sophisticated hackers. 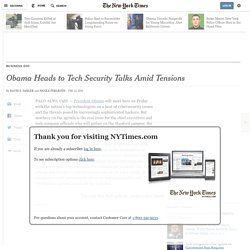 But nowhere on the agenda is the real issue for the chief executives and tech company officials who will gather on the Stanford campus: the deepening estrangement between Silicon Valley and the government. The long history of quiet cooperation between Washington and America’s top technology companies — first to win the Cold War, then to combat terrorism — was founded on the assumption of mutual interest. Edward J. Snowden’s revelations shattered that. Now, the Obama administration’s efforts to prevent companies from greatly strengthening encryption in commercial products like Apple’s iPhone and Google’s Android phones has set off a new battle, as the companies resist government efforts to make sure police and intelligence agencies can crack the systems. Google Is Not Alone in Discontent, but Its Threat Stands Out.

Americans Consider Certain Kinds of Data to be More Sensitive than Others. Different kinds of information evoke varying levels of sensitivity among Americans. 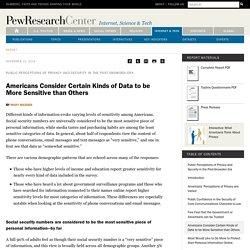 Social security numbers are universally considered to be the most sensitive piece of personal information, while media tastes and purchasing habits are among the least sensitive categories of data. In general, about half of respondents view the content of phone conversations, email messages and text messages as “very sensitive,” and one in four see that data as “somewhat sensitive.” There are various demographic patterns that are echoed across many of the responses: Yahoo! Privacy Centre. This policy covers how Yahoo! 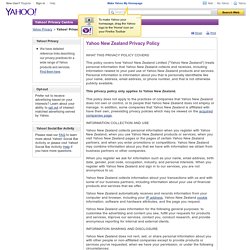 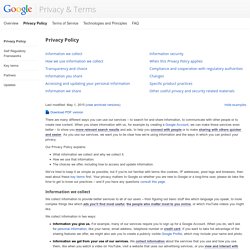 When you share information with us, for example by creating a Google Account, we can make those services even better – to show you more relevant search results and ads, to help you connect with people or to make sharing with others quicker and easier. As you use our services, we want you to be clear how we’re using information and the ways in which you can protect your privacy. Our Privacy Policy explains: What information we collect and why we collect it. We’ve tried to keep it as simple as possible, but if you’re not familiar with terms like cookies, IP addresses, pixel tags and browsers, then read about these key terms first.