European Commission : Trade : Anti-Counterfeiting Trade Agreement (ACTA) Protection and enforcement of intellectual property are crucial for the EU's ability to stimulate innovation and to compete in the global economy. 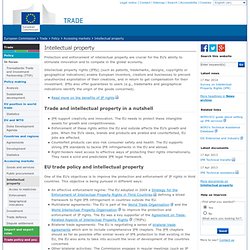 Intellectual property rights (IPRs) (such as patents, trademarks, designs, copyrights or geographical indications) enable European inventors, creators and businesses to prevent unauthorized exploitation of their creations, and in return to get compensation for their investment. IPRs also offer guarantees to users (e.g., trademarks and geographical indications identify the origin of the goods concerned). Read more on the benefits of IP rights Trade and intellectual property in a nutshell IPR support creativity and innovation. EU trade policy and intellectual property One of the EU's objectives is to improve the protection and enforcement of IP rights in third countries.

In addition, the EU conducts different types of support actions: D3.10: Biometrics in identity management: Future of IDentity in the Information Society. Proportionality is another very critical aspect of biometrics. 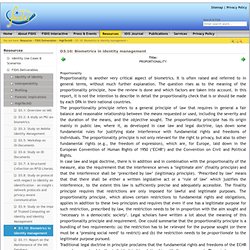 It is often raised and referred to in general terms, without much further explanation. The question rises as to the meaning of the proportionality principle, how the review is done and which factors are taken into account. In this report, it is not the intention to describe in detail the proportionality check that is or should be made by each DPA in their national countries. The proportionality principle refers to a general principle of law that requires in general a fair balance and reasonable relationship between the means requested or used, including the severity and the duration of the means, and the objective sought.

The proportionality principle has its origin mainly in public law, where it, as developed in case law and legal doctrine, lays down some fundamental rules for justifying state interference with fundamental rights and freedoms of individuals. (ii) The purpose or finality principle. Proportionality, Privacy and Public Opinion: A Reply to Kerr and Swire by Christopher Slobogin. Vanderbilt University - Law SchoolMay 7, 2010 Minnesota Law Review, Forthcoming Vanderbilt Public Law Research Paper No. 10-21 Abstract: This Article responds to two reviews of my book, Privacy at Risk: The New Government Surveillance and the Fourth Amendment (University of Chicago Press, 2007). 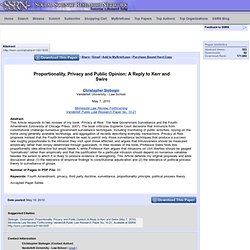 The book criticizes Supreme Court decisions that immunize from constitutional challenge numerous government surveillance techniques, including monitoring of public activities, spying on the home using generally available technology, and aggregation of records describing everyday transactions. Privacy at Risk proposes instead that the Fourth Amendment be read to permit only those surveillance techniques that produce a success rate roughly proportionate to the intrusion they visit upon those affected, and argues that intrusiveness should be measured empirically rather than simply determined through guesswork.

Precision and Proportionality Prevents Poor Privacy Policies - Identity, Privacy and Trust. The Information Commissioner has published a draft Code of Practice to address the problem of the poor-quality privacy notices that are all too common online, in printed documentation, or even used by call centres (the 'we may record anything we like' approach). 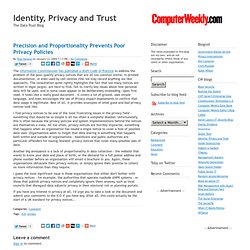 The consultation quite rightly highlights the fact that too many notices are written in legal jargon, are hard to find, fail to clarify key issues about how personal data will be used, and in some cases appear to be deliberately misleading. Upon first read, it looks like a really good document - it covers a lot of ground, uses simple language, and even encourages the use of Privacy Impact Assessments to confirm that data usage is legitimate.

Best of all, it provides examples of what good and bad privacy notices look like. I find privacy notices to be one of the most frustrating issues in the privacy field - something that should be so simple is all too often a complete disaster. Surveillance in society. Full print version, including charts and tables Richard Thomas, the former Information Commissioner, once famously remarked that the British people were in danger of “sleep walking into a surveillance society”. 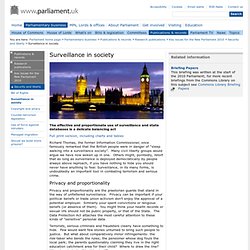 Many civil liberty groups would argue we have now woken up in one. Others might, pointedly, retort that as long as surveillance is deployed democratically by people always above reproach, if you have nothing to hide you should never have anything to fear. Surveillance, in its many forms, is undoubtedly an important tool in combating terrorism and serious crime. Proportionality – the key to compliant anti-bribery due diligence « Privacy and information law blog. On 1 July, the long anticipated Bribery Act 2010 came into force. 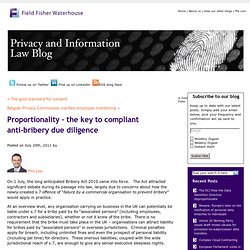 The Act attracted significant debate during its passage into law, largely due to concerns about how the newly-created s.7 offence of “failure by a commercial organisation to prevent bribery” would apply in practice. At an overview level, any organisation carrying on business in the UK can potentially be liable under s.7 for a bribe paid by its “associated persons” (including employees, contractors and subsidiaries), whether or not it knew of the bribe. There is no requirement that the bribe must take place in the UK – organisations can attract liability for bribes paid by “associated persons” in overseas jurisdictions. Criminal penalties apply for breach, including unlimited fines and even the prospect of personal liability (including jail time) for directors. These onerous liabilities, coupled with the wide jurisdictional reach of s.7, are enough to give any senior executive sleepless nights. Why this matters. Privacy 3.0 - The Principle of Proportionality by Andrew Serwin.

The Lares Institute; Foley & Lardner LLPAugust 15, 2009 University of Michigan Journal of Law Reform, Vol. 42, No. 4, Fall 2009 Abstract: Individual concern over privacy has existed as long as humans have said or done things they do not wish others to know about. 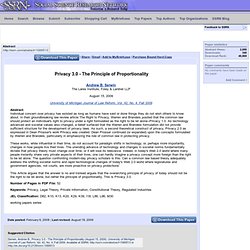 In their groundbreaking law review article The Right to Privacy, Warren and Brandeis posited that the common law should protect an individual's right to privacy under a right formulated as the right to be let alone--Privacy 1.0. As technology advanced and societal values also changed, a belief surfaced that the Warren and Brandeis formulation did not provide sufficient structure for the development of privacy laws. Privacy and Proportionality. PL&B Annual Conference review: the draft EU regulation, the need for proportionality.

Do we need to regulate generally accepted, low risk forms of data processing that individuals are now comfortable with as part of daily life (e.g. on-line orders, payroll processing and employment contract administration) to the same standard as types of processing that intrude more clearly on an individual's privacy (e.g. tracking user preferences, monitoring communications etc.)? 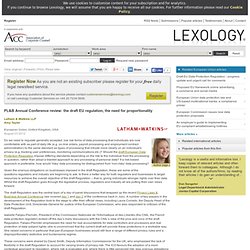 Should the draft European Data Protection Regulation impose differing standards depending on the risk to the individual from the processing in question, rather than adopt a blanket approach to any processing of personal data? If a risk-based approach is preferable, how would 'risky' data processing be distinguished from 'non-risky' data processing? Given the onerous obligations on businesses imposed in the draft Regulation, these are some of the questions regulators and industry are beginning to ask. PDFArtic.pdf.