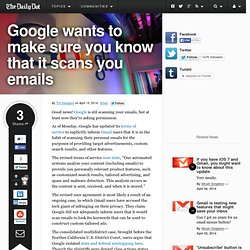 Google is stil scanning your emails, but at least now they're asking permission. As of Monday, Google has updated its terms of service to explicitly inform Gmail users that it is in the habit of scanning their personal emails for the purposes of providing target advertisements, custom search results, and other features. The revised terms of service now state, "Our automated systems analyze your content (including emails) to provide you personally relevant product features, such as customized search results, tailored advertising, and spam and malware detection.

This analysis occurs as the content is sent, received, and when it is stored.” The revised user agreement is most likely a result of an ongoing case, in which Gmail users have accused the tech giant of infringing on their privacy. The consolidated multidistrict case, brought before the Norther California U.S. This week's update is the first to Google's terms of service since last November. Data Privacy Means Data Security (and not Data Retention) Today is Data Privacy Day (also known as Data Protection Day), an international festival of our right to control our own personal information and to protect our communications from unchecked surveillance. 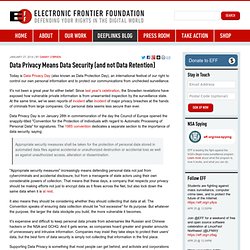 It's not been a great year for either belief. Since last year's celebration, the Snowden revelations have exposed how vulnerable private information is from unwarranted inspection by the surveillance state. At the same time, we've seen reports of incident after incident of major privacy breaches at the hands of criminals from large companies. Our personal data seems less secure than ever.

Data Privacy Day is on January 28th in commemoration of the day the Council of Europe opened the snappily-titled "Convention for the Protection of Individuals with regard to Automatic Processing of Personal Data" for signatures. It also means they should be considering whether they should collecting that data at all. It's been a bad year for data protection. Independent commission to investigate future of internet after NSA revelations.

A major independent commission headed by the Swedish foreign minister, Carl Bildt, was launched on Wednesday to investigate the future of the internet in the wake of the Edward Snowden revelations. 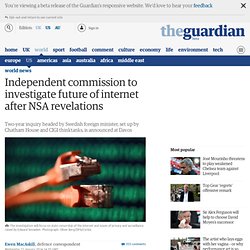 The two-year inquiry, announced at the World Economic Forum at Davos, will be wide-ranging but focus primarily on state censorship of the internet as well as the issues of privacy and surveillance raised by the Snowden leaks about America's NSA and Britain's GCHQ spy agencies. The investigation, which will be conducted by a 25-member panel of politicians, academics, former intelligence officials and others from around the world, is an acknowledgement of the concerns about freedom raised by the debate. Bildt, the former Swedish prime minister, said: "The rapid evolution of the net has been made possible by the open and flexible model by which it has evolved and been governed.

But increasingly this is coming under attack. "This is a debate we sorely need. " Online Guide to Practical Privacy Tools. Rod Beckstrom proposes ways to reclaim control over our online selves. Exit from comment view mode. 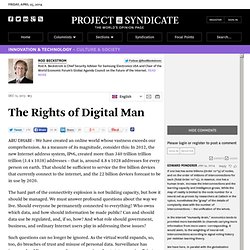 Click to hide this space ABU DHABI – We have created an online world whose vastness exceeds our comprehension. As a measure of its magnitude, consider this: In 2012, the new Internet address system, IPv6, created more than 340 trillion trillion trillion (3.4 x 1038) addresses – that is, around 4.8 x 1028 addresses for every person on earth. That should be sufficient to service the five billion devices that currently connect to the internet, and the 22 billion devices forecast to be in use by 2020.

The hard part of the connectivity explosion is not building capacity, but how it should be managed. Such questions can no longer be ignored. Privacy is 'off the table' in a 'post-9/11 world,' says New York City police chief. The rhetoric in the wake of the Boston Marathon bombings is starting to recall the heightened fear that took hold after the terrorist attacks on September 11th, 2001. 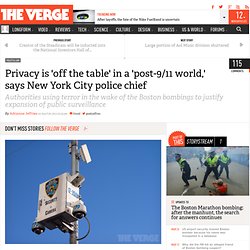