Updated European law will close Patriot Act data access loophole. BRUSSELS -- European lawmakers have been revising and updating the data protection laws that apply to all 27 European member states, after it was discovered that the United States can use the Patriot Act to access European citizens' data without their consent. 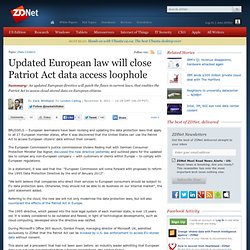 The European Commission's justice commissioner Viviane Reding met with German Consumer Protection Minister Ilse Aigner, discussed the new directive yesterday and outlined plans for the updated law to compel any non-European company -- with customers or clients within Europe -- to comply with European regulations. In a statement, it was said that the: "European Commission will come forward with proposals to reform the 1995 Data Protection Directive by the end of January 2012". "We both believe that companies who direct their services to European consumers should be subject to EU data protection laws.

Academic reference management software for researchers. Electronic Privacy Information Center. Facebook verwerkt teksten van vrienden in reclame. Facebook ads 'can republish user posts' FACEBOOK users who check in to a store or click the "like" button for a brand may soon find those actions retransmitted on their friends' pages as a "Sponsored Story" paid for by advertisers. 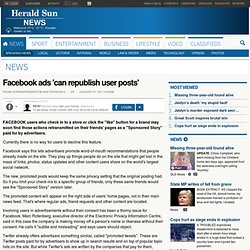 Currently there is no way for users to decline this feature. Facebook says this lets advertisers promote word-of-mouth recommendations that people already made on the site. Consumenten willen geen transparantie. Facebook Erodes Privacy and Tightens Security - PCWorld Business Center. Facebook straddles a precarious line when it comes to information security and data privacy. 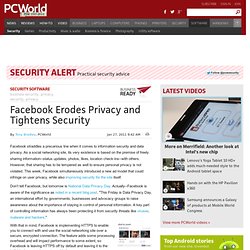 As a social networking site, its very existence is based on the premise of freely sharing information--status updates, photos, likes, location check-ins--with others. However, that sharing has to be tempered as well to ensure personal privacy is not violated. This week, Facebook simultaneously introduced a new ad model that could infringe on user privacy, while also improving security for the site itself. Don't tell Facebook, but tomorrow is National Data Privacy Day. Actually--Facebook is aware of the significance as noted in a recent blog post. Facebook launches Sponsored Stories, turning users into marketers. Get ready for Facebook’s latest advertising initiative, where you become the star of the marketing your friends see on their profiles. 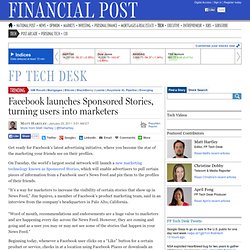 Facebook Friends Used in Ads. No Opting Out Of Facebook Turning Your Check-Ins, Likes Into Ads. Facebook ads 'can republish user posts' Latest Facebook Ad Idea Sparks Privacy Concerns. Facebook logo over binary code and computer sharing information CBS / iStock Photo NEW YORK - Facebook users who check in to a store or click the "like" button for a brand may soon find those actions retransmitted on their friends' pages as a "Sponsored Story" paid for by advertisers. 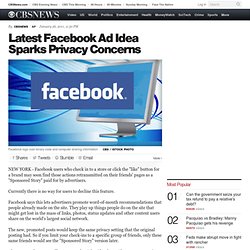 Currently there is no way for users to decline this feature. Facebook says this lets advertisers promote word-of-mouth recommendations that people already made on the site. They play up things people do on the site that might get lost in the mass of links, photos, status updates and other content users share on the world's largest social network. The new, promoted posts would keep the same privacy setting that the original posting had. Facebook Should Offer Sponsored Stories on an Opt-in Basis [Op-Ed] David Berkowitz is Senior Director of Emerging Media & Innovation for digital marketing agency 360i, where he develops social media and mobile programs for marketers spanning the media & entertainment, retail, travel, and CPG industries. 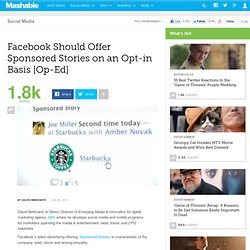 Facebook’s latest advertising offering, Sponsored Stories, is characteristic of the company: bold, clever and lacking empathy. While the move is unlikely to encounter a revolt by users, it may make some queasy. De WikiLeaks code (dutch subtitles) WikiLeaks and the Possibility of Open Diplomacy. Home > Ideas > Innovations Make a Comment By Peter Singer | Project Syndicate | December 13, 2010 At Princeton University, Woodrow Wilson, who was president of the university before he became president of the United States, is never far away. 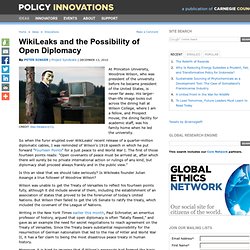 His larger-than-life image looks out across the dining hall at Wilson College, where I am a fellow, and Prospect House, the dining facility for academic staff, was his family home when he led the university. LRB · Slavoj Žižek · Good Manners in the Age of WikiLeaks. In one of the diplomatic cables released by WikiLeaks Putin and Medvedev are compared to Batman and Robin. 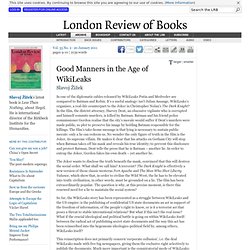 It’s a useful analogy: isn’t Julian Assange, WikiLeaks’s organiser, a real-life counterpart to the Joker in Christopher Nolan’s The Dark Knight? In the film, the district attorney, Harvey Dent, an obsessive vigilante who is corrupted and himself commits murders, is killed by Batman. Batman and his friend police commissioner Gordon realise that the city’s morale would suffer if Dent’s murders were made public, so plot to preserve his image by holding Batman responsible for the killings. The film’s take-home message is that lying is necessary to sustain public morale: only a lie can redeem us. No wonder the only figure of truth in the film is the Joker, its supreme villain. The Truth According To Wikipedia. HILLIS'S QUESTION: WHO GETS TO KEEP SECRETS?- An EDGE Special Event. RETHINKING INFORMATION PRIVACY IN ANAGE OF ONLINE TRANSPARENCY. Electronic Privacy Information Center.

Total Personlization Needs Total Transparency. Kevin Kelly on the next 5,000 days of the web. Toward Risk Assessment as a Service in Cloud Environments. VirtualRevol: Cost of Free. Thinking Outside the Box: ConsideringTransparency, Anonymity, andPseudonymity as Overall Solutions tothe Problems of Information. Journalism in the Age of Data. In the words of Terrell Owens, get your popcorn ready, because this video (below) is awesome. 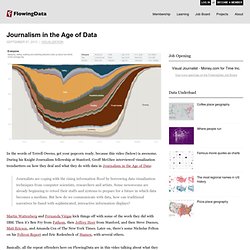 During his Knight Journalism fellowship at Stanford, Geoff McGhee interviewed visualization trendsetters on how they deal and what they do with data in Journalism in the Age of Data: Journalists are coping with the rising information flood by borrowing data visualization techniques from computer scientists, researchers and artists. Behavioral targeting. Behavioral Targeting refers to a range of technologies and techniques used by online website publishers and advertisers which allows them to increase the effectiveness of their campaigns by capturing data generated by website and landing page visitors. 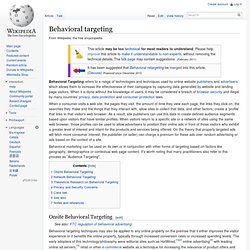 When it is done without the knowledge of users, it may be considered a breach of browser security and illegal by many countries' privacy, data protection and consumer protection laws. When a consumer visits a web site, the pages they visit, the amount of time they view each page, the links they click on, the searches they make and the things that they interact with, allow sites to collect that data, and other factors, create a 'profile' that links to that visitor's web browser. As a result, site publishers can use this data to create defined audience segments based upon visitors that have similar profiles. Onsite Behavioral Targeting[edit] You Deleted Your Cookies? Think Again. So Many Trackers, So Little Time - Digits. Facebook in Online Privacy Breach; Applications Transmitting Identifying Information.