Why online tracking is getting creepier. The marketers that follow you around the Web are getting nosier. 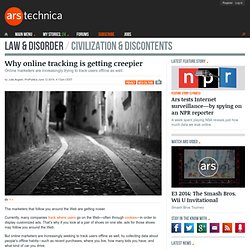 Currently, many companies track where users go on the Web—often through cookies—in order to display customized ads. That's why if you look at a pair of shoes on one site, ads for those shoes may follow you around the Web. But online marketers are increasingly seeking to track users offline as well, by collecting data about people's offline habits—such as recent purchases, where you live, how many kids you have, and what kind of car you drive. Here's how it works, according to some revealing marketing literature we came across from digital marketing firm LiveRamp: A retailer—let's call it The Pricey Store—collects the e-mail addresses of its high-spending customers. Tracking people using their real names—often called "onboarding"—is a hot trend in Silicon Valley.

But critics worry about the implications of allowing data brokers to profile every person who is connected to the Internet. Surveillance, crowd control and privacy in the age of the Internet of Things. Modern society simply wouldn't work without places where large crowds of people gather. 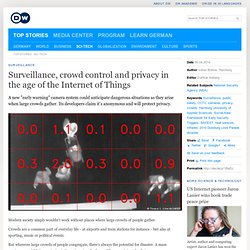 Crowds are a common part of everyday life - at airports and train stations for instance - but also at sporting, music or political events. But wherever large crowds of people congregate, there's always the potential for disaster. A mass panics can quickly turn a train station, airport and other public space into a death trap. In 2010, overcrowding led to catastrophe during the Love Parade music festival in the western German city of Duisburg. Twenty-one people died and hundreds more were injured when mass panic broke out. The event set a precedent for what not to do when organizing large events.

Equally, it was a tragic reminder what can happen when any kind of crowd comes together - whether organized or spontaneous. Infrared image: a computer counts the number of people within an area based on their body heat signatures Monitoring crowds Body heat analysis The system relies on heat-sensitive cameras. Risks to the ‘Internet of Things’ Managing Privacy Will Be Key Robert Stroud The privacy and security risks posed by the Internet of Things will pose a growing challenge for IT security professionals managing online transactions and relationships in the coming years, ISACA's Robert Stroud says. 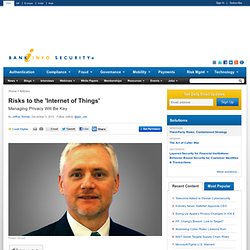 The Internet of Things - only 16 percent of respondents to an ISACA survey know what it is - refers to various devices such as GPS systems, electronic toll devices and smart TVs, to name a few, that are connected to the Internet. Cisco Systems estimates that 50 billion objects will be connected to the Internet by 2020. Internet of Things - Privacy and Security in a Connected World. The Federal Trade Commission held a public workshop to explore consumer privacy and security issues posed by the growing connectivity of devices. 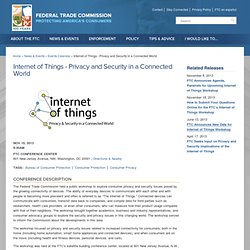 The ability of everyday devices to communicate with each other and with people is becoming more prevalent and often is referred to as “The Internet of Things.” Connected devices can communicate with consumers, transmit data back to companies, and compile data for third parties such as researchers, health care providers, or even other consumers, who can measure how their product usage compares with that of their neighbors. The workshop brought together academics, business and industry representatives, and consumer advocacy groups to explore the security and privacy issues in this changing world. The workshop served to inform the Commission about the developments in this area. The workshop was held at the FTC’s satellite building conference center, located at 601 New Jersey Avenue, N.W., Washington, DC, and was free and open to the public. The Internet of Things could encroach on personal privacy - Computerworld. Computerworld - A recent White House report on big data wonders aloud about the capability of sensors and smart meters to turn homes into fish tanks, completely transparent to marketers, police -- and criminals. 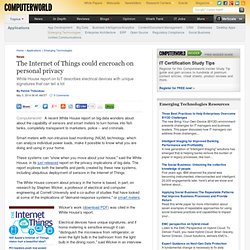 Smart meters with non-intrusive load monitoring (NILM) technology, which can analyze individual power loads, make it possible to know what you are doing and using in your home. These systems can "show when you move about your house," said the White House, in its just released report on the privacy implications of big data. Internet of Things: Consumers Conflicted Between Privacy and Convenience. The Internet of Things (IoT) is here and there's no turning back — interconnected gadgets, biometrics, talking cars and mind-reading sensors are just a few of the IoT indicators rapidly proliferating in our daily lives, but consumers remain cautious, new research finds. 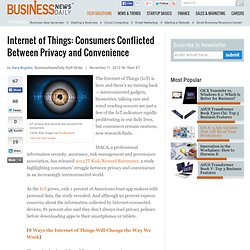 ISACA, a professional information security, assurance, risk management and governance association, has released 2013 IT Risk/Reward Barometer, a study highlighting consumers' struggle between privacy and convenience in an increasingly interconnected world. As the IoT grows, only 1 percent of Americans trust app makers with personal data, the study revealed. And although 92 percent express concerns about the information collected by Internet-connected devices, 81 percent also said they don't always read privacy policies before downloading apps to their smartphones or tablets. FTC wading into 'Internet of things' - Erin Mershon.

As an array of everyday objects such as thermostats, toasters and even sneakers gets connected to the Internet, the FTC is taking a first stab at examining this vast and emerging area of technology, sparking concern from trade groups that fear regulation could harm innovation. 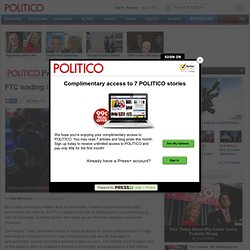 The Federal Trade Commission is due to hold a workshop on the so-called Internet of Things next week as it begins to sort out how existing privacy and security laws apply to next-generation devices that collect streams of data on users. The daylong event is widely seen as the agency’s effort to establish a foothold in this largely unregulated piece of the Internet economy that is transforming a wide variety of industries. Continue Reading “Technology is just developing at a pace that we can barely keep up with,” FTC Chairwoman Edith Ramirez said in her first appearance as head of the agency in April.

(Sign up for POLITICO’s Morning Tech tip sheet) (Also on POLITICO: Full technology policy coverage) Privacy in the Internet of Things. Tobias Kowatsch, Senior Researcher at the Institute of Technology Management (ITEM) at the Every now and then there is a new debate about privacy issues in an internet context. 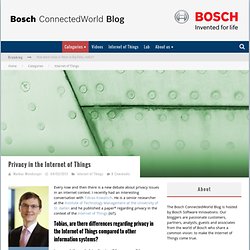 I recently had an interesting conversation with Tobias Kowatsch. Office of HIPAA Privacy & Security at Miller School of Medicine. The Internet of Things and Privacy Most people access and share information by connecting to the internet via a computer, tablet, or smartphone. 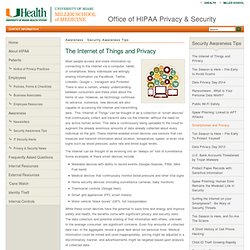