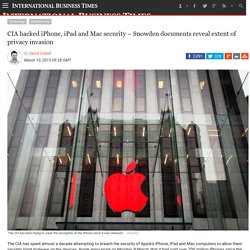 Apple announced on Monday, 9 March, that it had sold over 700 million iPhones since the first version was announced in 2007, giving some idea of the scope of the CIA tactics. Revealed in documents released to The Intercept by Edward Snowden, the CIA's efforts at undermining Apple's encryption has been announced at an secret annual gathering known as the "Jamboree" which has been taking place since 2006, a year before the first iPhone was released. According to the documents, the spies have been looking at physical and non-invasive methods of cracking iPhone and iPad security, targeting the essential security keys used to encrypt data stored on the Apple devices.

Poisoned Xcode "The modified version of Xcode, the researchers claimed, could enable spies to steal passwords and grab messages on infected devices. Federal Judge Rules It LEGAL For Government To Track You Using Your Cell Phone WITHOUT A Warrant! CISPA Claws Back to Life. It's baa-aaack. 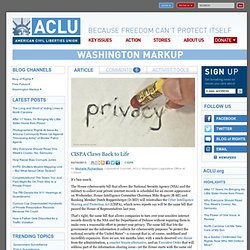 The House cybersecurity bill that allows the National Security Agency (NSA) and the military to collect your private internet records is scheduled for an encore appearance on Wednesday. House Intelligence Committee Chairman Mike Rogers (R-MI) and Ranking Member Dutch Ruppersberger (D-MD) will reintroduce the Cyber Intelligence Sharing and Protection Act (CISPA), which news reports say will be the same bill that passed the House of Representatives last year. That's right, the same bill that allows companies to turn over your sensitive internet records directly to the NSA and the Department of Defense without requiring them to make even a reasonable effort to protect your privacy. The same bill that lets the government use the information it collects for cybersecurity purposes "to protect the national security of the United States"—a concept that is, of course, undefined and incredibly expansive.

Get Involved Tell President Obama: Protect My Privacy, Veto CISPA. Amazing mind reader reveals his 'gift'. Everyone who attended #OWS with a cell phone had their identity logged, says security expert. Please note that by playing this clip YouTube and Google will place a long term cookie on your computer. 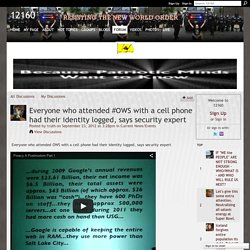 While we in the civil liberties community disagree strongly with private investigator Steven Rambam's admonition to "Get Over It," after listening to him describe electronic surveillance powers it's hard to disagree with the first part of the title of his talk: "Privacy Is Dead. " (Part two of the talk is below.) "Where you work, what your salary is, your criminal history, all the lawsuits you've been involved in, real property...everything you've ever purchased, everywhere you've ever been...Your information is worth money. Your privacy today isn't being invaded by big brother -- it's being invaded by big marketer," he told an audience of hackers and privacy activists at HOPE 9 in New York during the summer of 2012. 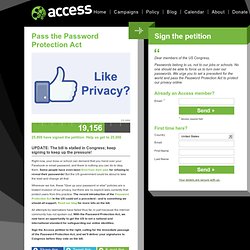 This website, (the “Site”) is operated by Access (“We” or “Us”). We work hard to protect your privacy. We’re members too, and we treat your privacy as we do our own. We strongly believe that you have the right to control the use of your personal information and that your privacy must be respected. In this policy, "Access" refers to Access staff, board members, cooperating attorneys, interns, volunteers, and consultants, all of whom are bound by law or contract to keep information they receive as part of their assistance to Access confidential. Collection of Information When you are on the Access website and are asked for personal information, you are sharing that information with Access alone, unless stated otherwise.

Access does not sell, rent, or lease your personal data under any circumstances. Privacy Loses in Twitter/Wikileaks Records Battle. San Francisco - A district court judge in Virginia ruled against online privacy today, allowing U.S federal investigators to collect private records of three Twitter users as part of its investigation related to Wikileaks. 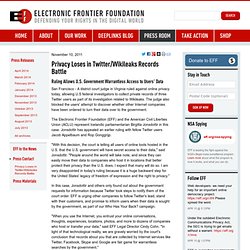 The judge also blocked the users' attempt to discover whether other Internet companies have been ordered to turn their data over to the government. The Electronic Frontier Foundation (EFF) and the American Civil Liberties Union (ACLU) represent Icelandic parliamentarian Birgitta Jonsdottir in this case. Jonsdottir has appealed an earlier ruling with fellow Twitter users Jacob Appelbaum and Rop Gonggrijp.

"With this decision, the court is telling all users of online tools hosted in the U.S. that the U.S. government will have secret access to their data," said Jonsdottir. In this case, Jonsdottir and others only found out about the government requests for information because Twitter took steps to notify them of the court order.