FBI operating fleet of surveillance aircraft flying over US cities. The FBI is operating a small air force with scores of low-flying planes across the US carrying video and, at times, cellphone surveillance technology – all hidden behind fictitious companies that are fronts for the government, the Associated Press has learned. 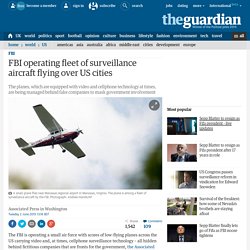 The planes’ surveillance equipment is generally used without a judge’s approval, and the FBI said the flights are used for specific, ongoing investigations. In a recent 30-day period, the agency flew above more than 30 cities in 11 states across the country, an AP review found. Aerial surveillance represents a changing frontier for law enforcement, providing what the government maintains is an important tool in criminal, terrorism or intelligence investigations. But the program raises questions about whether there should be updated policies protecting civil liberties as new technologies pose intrusive opportunities for government spying. 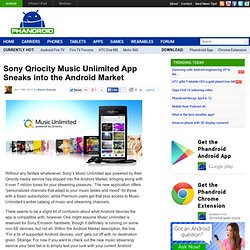 The new application offers “personalized channels that adapt to your music tastes and mood” for those with a Basic subscription, while Premium users get that plus access to Music Unlimited’s entire catalog of music and streaming channels. There seems to be a slight bit of confusion about what Android devices the app is compatible with, however. One might assume Music Unlimited is reserved for Sony Ericsson handsets, though it definitely is running on some non-SE devices, but not all. Within the Android Market description, the line “For a lis of supported Android devices, visit” gets cut off with no destination given. 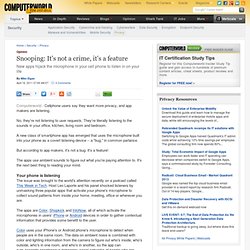 No, they're not listening to user requests. Cellphones Track Your Every Mo. Homeland Security Was Interested In Doing 'Covert' Pedestrian 'Scans' From 30 Feet Away. Last year, we wrote a few times about how there was a company selling scanner vans -- based on the same technology used in those airport naked scanners -- that could be used to surreptitiously look into vehicles. 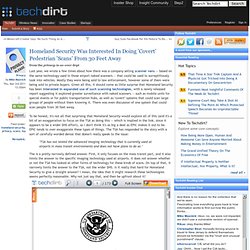 Mostly they were being sold to law enforcement, however some of them were being sold to private buyers. The Real Internet Censors: Unaccountable ISPs? Obama assertion: FBI can get phone records without oversight. WASHINGTON — The Obama administration's Justice Department has asserted that the FBI can obtain telephone records of international calls made from the U.S. without any formal legal process or court oversight, according to a document obtained by McClatchy. 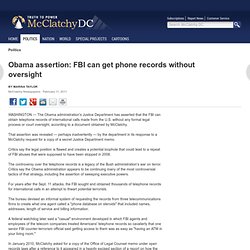 That assertion was revealed — perhaps inadvertently — by the department in its response to a McClatchy request for a copy of a secret Justice Department memo. Critics say the legal position is flawed and creates a potential loophole that could lead to a repeat of FBI abuses that were supposed to have been stopped in 2006. The controversy over the telephone records is a legacy of the Bush administration's war on terror. Critics say the Obama administration appears to be continuing many of the most controversial tactics of that strategy, including the assertion of sweeping executive powers. Feds Tell Supreme Court They Should Be Able To Stick A GPS Device On Your Car Without A Warrant. In the federal government's apparent ongoing quest to stamp out any remnants of the 4th Amendment, the administration has now officially petitioned the Supreme Court to let it stick GPS devices on cars with no warrant. 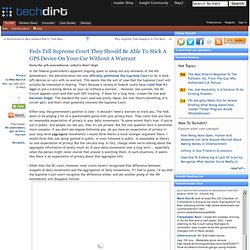 This seems like the sort of case that the Supreme Court will actually be interested in hearing. Play By Play Of How HBGary Federal Tried To Expose Anonymous... And Got Hacked Instead. Nate Anderson has put together an excellent play-by-play of the whole HBGary Federal fiasco, mainly by going through the emails that Anonymous leaked. 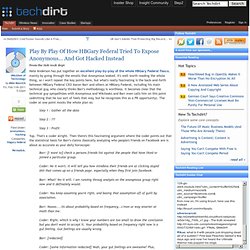 Bill to Restrict Online Tracking Introduced in Congress. Can A Contract Remove Fair Use Rights? Last year, we wrote about a ridiculous situation in which the Association for Information Media and Equipment (AIME) threatened UCLA, after discovering that the school had set up an online video service, that let UCLA professors put up legally licensed video clips so that students could watch them from their computers. 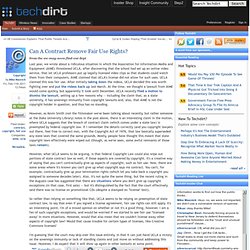 AIME claimed that UCLA's license did not allow for such uses. UCLA claimed this was fair use. After initially taking down the videos, UCLA decided this was worth fighting over and put the videos back up last March. At the time, we thought a lawsuit from AIME would come quickly, but apparently it took until December. UCLA recently filed a motion to dismiss the lawsuit, setting up a few reasons why -- including the claim that, as a state university, it has sovereign immunity from copyright lawsuits and, also, that AIME is not the copyright holder in question, and thus has no standing. WikiLeaks.