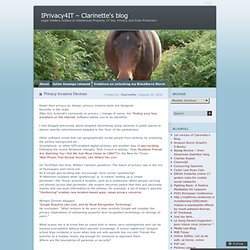 Recently in the news: After Eric Schmidt’s comments on privacy / change of name, the ‘Finding your face anywhere on the internet‘ software allows you to be identified. I had blogged previously about targeted advertising using cameras in public places to deliver specific advertisement adapted to the ‘face’ of the pedestrians. Other software exists that can geographically locate people from pictures by analysing the picture background etc… Smartphone, or other GPS-enabled digital pictures, are another way of geo-locating.

Following the recent Facebook changes, Tech Crunch is asking: ‘Your Facebook Friends Are Watching You—Did We Just Move Closer to 1984? “On the New Yor Times:‘Web Photos That Reveal Secrets, Like Where You Live’ On TechFlash this time, William Carleton questions ‘The future of privacy law in the era of Foursquare and check-ins‘ As if simply geo-locating was not enough, here comes “geofencing“. 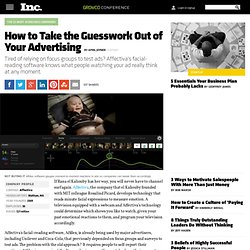 Affectiva, the company that el Kaliouby founded with MIT colleague Rosalind Picard, develops technology that reads minute facial expressions to measure emotion. A television equipped with a webcam and Affectiva's technology could determine which shows you like to watch, given your past emotional reactions to them, and program your television accordingly. Affectiva's facial-reading software, Affdex, is already being used by major advertisers, including Unilever and Coca-Cola, that previously depended on focus groups and surveys to test ads. The problem with the old approach? It requires people to self-report their reactions.

Since its launch in 2011, Affdex has helped measure audience sentiments for several high-profile events, including the 2012 U.S. presidential debates and this year's Super Bowl. "Affectiva is doing something radically different with data. 8 Weird Ways People Are Using Facial Recognition Software. Once in a while, it's nice to be able to blend into the crowd, especially for those who could use a break from being constantly digitally connected. 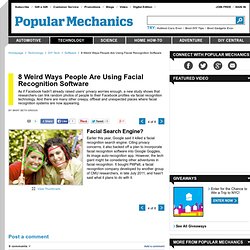 But even away from the computer, it seems, we can't escape our digital personas (and not only when prospective employers stumble into embarrassing online photos). "People are losing control of their own information," Ginger McCall, the Open Government Counsel for the Electronic Privacy Information Center says. Security stories - Gizmodo. Face/facial Recognition.

Layar, worlds first mobile Augmented Reality browser‬‏ SceneTap's cameras tell you how many boys and girls are at the bar. SceneTap is launching soon for iPhone and Android, focusing on providing up-to-date information about what’s going on in local bars. 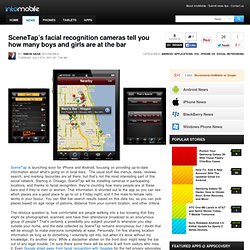 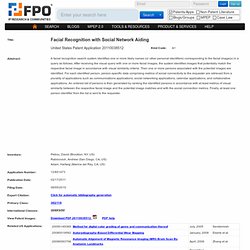 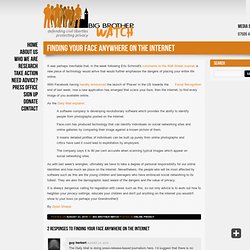 With Facebook having handily announced the launch of 'Places' in the US towards the end of last week; now a new application has emerged that scans your face, then the internet, to find every image of you available online. As the Daily Mail explains: As with last week's wrangles, ultimately we have to take a degree of personal responsibility for our online identities and how much we place on the internet. Nevertheless, the people who will be most affected by software such as this are the young children and teenagers who have embraced social networking to its fullest.

They are also the demographic least aware of the dangers and the value of privacy. Michael Zimmer.org » Blog Archive » Google Acquires Like.com, and its Facial Recognition Technology.