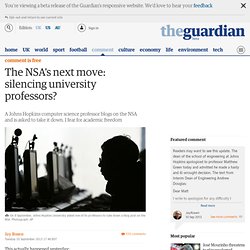 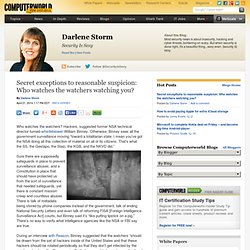 Hackers, suggested former NSA technical director-turned-whistleblower William Binney. Otherwise, Binney sees all the government surveillance moving “toward a totalitarian state. I mean you've got the NSA doing all this collection of material on all of its citizens. Yes, The FBI Used Malware To Try To Reveal Tor Users. The NSA Is Breaking Most Encryption on the Internet. The new Snowden revelations are explosive. 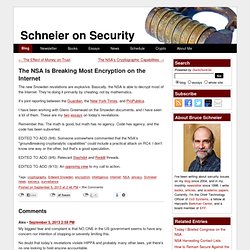 Basically, the NSA is able to decrypt most of the Internet. Apple's Fingerprint ID And How It May Take Away Your 5th Amendment Right To Protect Your Data. Silicon Valley protecting yourPrivacy? ; "the_conspiracy" FLYING PIG: The NSA Is Running Man In The Middle Attacks Imitating Google's Servers. NIST-s Ridiculous Non. Is It the Dawn of the Encryption App? We might live in an age of persistent and pervasive surveillance. 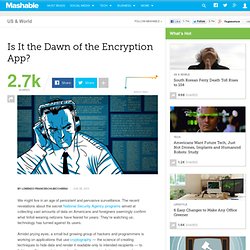 The recent revelations about the secret National Security Agency programs aimed at collecting vast amounts of data on Americans and foreigners seemingly confirm what tinfoil-wearing netizens have feared for years: They're watching us; technology has turned against its users. Amidst prying eyes, a small but growing group of hackers and programmers is working on applications that use cryptography — the science of creating techniques to hide data and render it readable only to intended recipients — to fight surveillance and give regular citizens access to what was once only reserved to computer experts.

It's a battle of geek-made encryption apps against their uniformed snooping foes. And the spying agencies of the world are getting more adversaries every day. Did the FBI Lean On Microsoft for Access to Its Encryption Software? The NSA is reportedly not the only government agency asking tech companies for help in cracking technology to access user data. 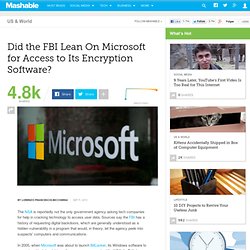 Sources say the FBI has a history of requesting digital backdoors, which are generally understood as a hidden vulnerability in a program that would, in theory, let the agency peek into suspects' computers and communications. In 2005, when Microsoft was about to launch BitLocker, its Windows software to encrypt and lock hard drives, the company approached the NSA, its British counterpart the GCHQ and the FBI, among other government and law-enforcement agencies. Introduction to proXPN VPN. Get your FREE proXPN VPN account now! PRIVATE WiFi - Why you should use a personal VPN. Private WiFi - Protect your Identity and Sensitive Information on any Public WiFi Network. Porn companies adopt facial-recognition technology, encourage Instagram photos. Feds put heat on Web firms for master encryption keys. Large Internet companies have resisted the government's demands for encryption keys requests on the grounds that they go beyond what the law permits, according to one person who has dealt with these attempts.

(Credit: Declan McCullagh) The U.S. government has attempted to obtain the master encryption keys that Internet companies use to shield millions of users' private Web communications from eavesdropping. These demands for master encryption keys, which have not been disclosed previously, represent a technological escalation in the clandestine methods that the FBI and the National Security Agency employ when conducting electronic surveillance against Internet users. If the government obtains a company's master encryption key, agents could decrypt the contents of communications intercepted through a wiretap or by invoking the potent surveillance authorities of the Foreign Intelligence Surveillance Act. Dennis Chang's VOIP-Pal aims to help law enforcement monitor Skype, other Internet chats.

Photo by KIMIHIRO HOSHINO/AFP/Getty Images According to law enforcement agencies, the rising popularity of Internet chat services like Skype has made it difficult to eavesdrop on suspects’ communications. 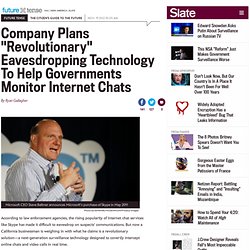 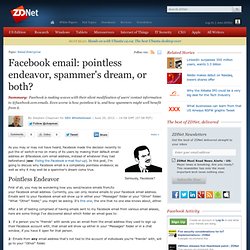 After a bit of testing comprised of having emails sent to my Facebook email from various email aliases, here are some things I've discovered about which folder an email goes to: 2: Emails from any email address that's not tied to the account of individuals you're "friends" with, will go to your "Other" folder. Yes, the FBI and CIA can read your email. Here's how. The U.S. government -- and likely your own government, for that matter -- is either watching your online activity every minute of the day through automated methods and non-human eavesdropping techniques, or has the ability to dip in as and when it deems necessary -- sometimes with a warrant, sometimes without. 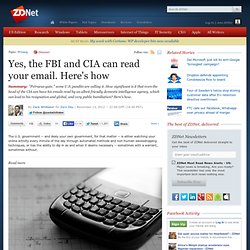