The Insidiousness of Facebook Messenger's Mobile App Terms of Service. Corrections/Updates (4:45pm EST 8/11/2014): A previous version of this post contained inaccurate and outdated information about Facebook's Messenger app for Android devices (Facebook has provided its own response to concerns about the app here). 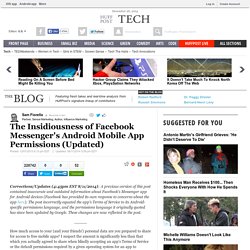 The post incorrectly equated the app's Terms of Service to its Android-specific permissions language, and the permissions language it originally quoted has since been updated by Google. These changes are now reflected in the post. How much access to your (and your friends') personal data are you prepared to share for access to free mobile apps? I suspect the amount is significantly less than that which you actually agreed to share when blindly accepting an app's Terms of Service or the default permissions required by a given operating system for an app to function.

The Facebook Messenger app is a standalone version of the instant chat feature within the social network. Take the first step by deleting this app. Your Computer and Phone Cameras Are On. Meet the 'Spy Smurfs': Here's how the NSA, GCHQ target iPhones, Android devices. British and American spy agencies are able to gather vast amounts of personally identifiable information, including age, location, and even sexual orientation and political persuasions, according to the latest documents leaked by former U.S. government contractor Edward Snowden. 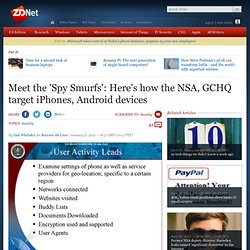 The Guardian, The New York Times and ProPublica working together each published claims that smartphone apps "leak" data from iPhone and Android apps, which are then piggybacked by Britain's GCHQ and the U.S. National Security Agency. Senator Franken Wants Us to Know When Our Apps Are Tracking Us: Cyberstalking apps and geolocation apps can track a mobile-device user’s location—and this information can then be shared with third parties such as advertisers, or with jealous spouses—often without the user’s knowledge that this is happening. Recently, the Federal Trade Commission (FTC) publicized its concern over apps installed on children’s phones that tracked the children’s location and broadcast it to advertisers and third parties without proper consent by, or notification to, parents or children. Senator Al Franken wants to do something about this.

Moreover, he is also concerned about mobile applications that allow other people to surreptitiously track another person, again using geolocation. The Senator recently proposed legislation that attempts to require that companies that develop and sell such mobile apps must get our consent before such programs are installed on our mobile devices. Students Refusing Tracking ID Cards Unable to Vote for Homecoming? Privacy and Security Fanatic: HOPE 9: Whistleblower Binney says the NSA has dossiers on nearly every US citizen. The U.S. joins China in censoring the Internet. A Senate committee passed an act recently called the Protect IP Act but then, just as quickly, a Senator from Oregon, Ron Wyden, put the bill on hold because as he said, it would “muzzle speech and stifle innovation and economic growth.” 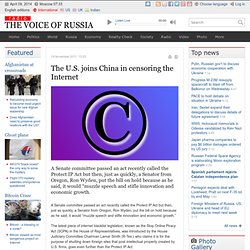 The latest piece of internet blacklist legislation, known as the Stop Online Piracy Act (SOPA) in the House of Representatives, was introduced by the House Judiciary Committee Chairman Lamar Smith (R-Tex.) who claims it is for the purpose of shutting down foreign sites that post intellectual property created by U.S. firms, goes even further than the Protect IP Act. Court Says Warrantless Mobile Phone Tracking Is Unconstitutional.

In an amazingly short and to the point ruling (embedded below), a judge in a district court in Southern Texas, Lynn Hughes, ruled that letting the government get mobile phone data without a warrant was unconstitutional: When the government requests records from cellular services, data disclosing the location of the telephone at the time of particular calls may be acquired only by a warrant issued on probable cause. 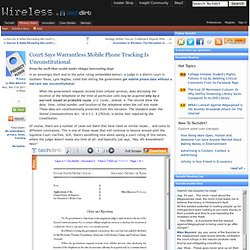 U.S. Fmr. Fox News Executive: Americans' Phones Were Hacked. 0zDIw.jpg (JPEG Image, 960x767 pixels) Microsoft Patents 'Legal Intercept' Technology, Will Skype Have A Backdoor? — TheTelecomBlog.com. Microsoft and Skype may represent a match made in mobile heaven but they’ve been in the news for all the wrong reasons of late. 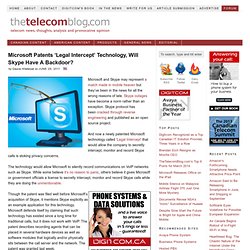 Skype outages have become a norm rather than an exception. The Legislation That Could Kill Internet Privacy for Good - Conor Friedersdorf - Politics. House panel approves broadened ISP snooping bill. Internet providers would be forced to keep logs of their customers' activities for one year--in case police want to review them in the future--under legislation that a U.S. 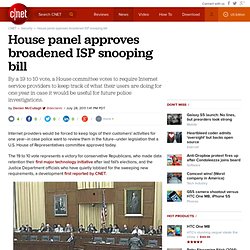 House of Representatives committee approved today. The 19 to 10 vote represents a victory for conservative Republicans, who made data retention their first major technology initiative after last fall's elections, and the Justice Department officials who have quietly lobbied for the sweeping new requirements, a development first reported by CNET.

A last-minute rewrite of the bill expands the information that commercial Internet providers are required to store to include customers' names, addresses, phone numbers, credit card numbers, bank account numbers, and temporarily-assigned IP addresses, some committee members suggested. JSaRu.jpg (JPEG Image, 450x337 pixels) - Scaled (77. Aurora critics can remain anonymous, judge rules. Spying On The Home Front. What did you do for AT&T? 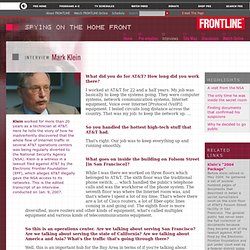 How long did you work there? I worked at AT&T for 22 and a half years. My job was basically to keep the systems going. They were computer systems, network communication systems, Internet equipment, Voice over Internet [Protocol (VoIP)] equipment. I tested circuits long distance across the country. Petewarden/iPhoneTracker @ GitHub. This open-source application maps the information that your iPhone is recording about your movements. 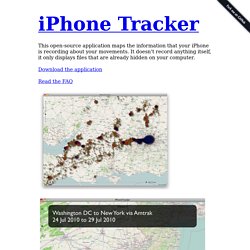 It doesn't record anything itself, it only displays files that are already hidden on your computer. Download the application. FBI: Customers Might Sue If They Knew Companies Were Helping With Wiretaps. Breaking News on EFF Victory: Appeals Court Holds that Email Privacy Protected by Fourth Amendment. ACLU of Northern California : Don't Hide Your Gun in Your iPhone(?!) In a case with chilling privacy implications, the California Supreme Court recently held that police officers can search the entire contents of a cell phone whenever they arrest someone, no matter how small the suspected crime or how relevant the cell phone contents might be. 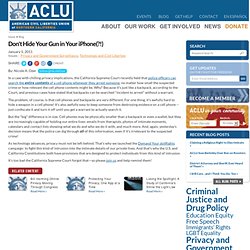 One Hundred Naked Citizens: One Hundred Leaked Body Scans. TSA Groping Out Of Control. Facebook's Zuckerberg Says The Age of Privacy is Over. Facebook founder Mark Zuckerberg told a live audience yesterday that if he were to create Facebook again today, user information would by default be public, not private as it was for years until the company changed dramatically in December. 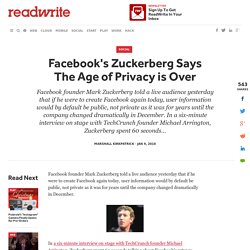