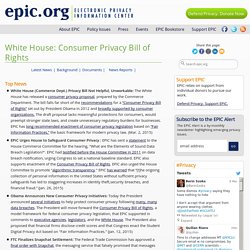 Privacy Bill Not Helpful, Unworkable: The White House has released a consumer privacy proposal, prepared by the Commerce Department. The bill falls far short of the recommendations for a “Consumer Privacy Bill of Rights” set out by President Obama in 2012 and broadly supported by consumer organizations. The draft proposal lacks meaningful protections for consumers, would preempt stronger state laws, and create unnecessary regulatory burdens for businesses. EPIC has long recommended enactment of consumer privacy legislation based on “Fair Information Practices,” the basic framework for modern privacy law.

Background Building on the recommendations of a Green Paper on Privacy and Innovation released by the Department of Commerce's Internet Policy Task Force in December 2010, the Administration released Consumer Data Privacy in a Networked World: A Framework for Protecting Privacy and Promoting Innovation in the Global Economy. Documents News Reports. Texas nurse who contracted Ebola sues hospital company. Nina Pham, a nurse at Texas Health Presbyterian Hospital Dallas, filed a lawsuit Monday against the hospital's parent company, Texas Health Resources. 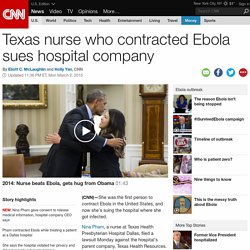 She claims the company made her "a symbol of corporate neglect -- a casualty of a hospital system's failure to prepare for a known and impending medical crisis. " THR ignored Ebola warnings, its chief medical officer "made numerous patently false statements to Congress," and the company "wholly failed to ensure that appropriate polices, procedures, and equipment were in place," leaving health care providers untrained, unprotected and at risk for exposure, the lawsuit says. "I was hoping that THR would be more open and honest about everything that happened at the hospital, and the things they didn't do that led to me getting infected with Ebola," Pham said in a statement. "But that didn't happen and I felt I was left with no choice but to turn to the courts for help.

" 'In a cruel twist...' "In a cruel twist, after watching Mr. 'No risk' Supreme Court: Police retention of data breaches privacy rights, but is justified. Supreme Court by Diamond Geezer/Flickr The Supreme Court has confirmed that where the state retains data on individuals without their consent, it is interfering with their privacy even when that data is public. 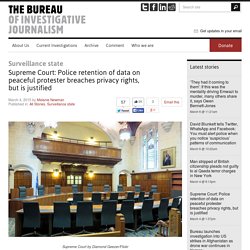 But despite this finding the court ruled that the Metropolitan Police acted lawfully by keeping details of the activities of a 90-year-old pensioner with no criminal record as the interference with his private life was “minor”. The pensioner John Catt launched legal action four years ago after discovering that police had secretly logged both his habit of drawing sketches of demonstrations he had attended and descriptions of his appearance and clothing. He wanted to force the Met to destroy this data. Last year the Court of Appeal found in favour of Catt. Reversing that decision today, the Supreme Court said it was satisfied that the Met’s data-handling regime, under which information was “regularly reviewed for deletion” meant there was no significant interference. Privacy Might Be Getting an International Champion. The U.N. 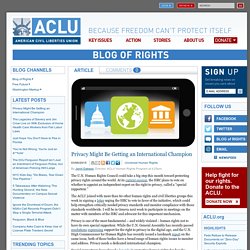 Human Rights Council could take a big step this month toward protecting privacy rights around the world. At its current session, the HRC plans to vote on whether to appoint an independent expert on the right to privacy, called a "special rapporteur. " The ACLU joined with more than 60 other human rights and civil liberties groups this week in signing a letter urging the HRC to vote in favor of the initiative, which could help strengthen critically needed privacy standards and monitor compliance with those standards worldwide. I will be in Geneva next week to participate in meetings on the matter with members of the HRC and advocate for this important mechanism. Privacy is one of the most fundamental – and widely violated – human rights not to have its own special rapporteur.

Special rapporteurs have played a key role in protecting human rights for decades. CISA Cybersecurity Bill Advances Despite Privacy Concerns. For months, privacy advocates have been pointing to flaws in CISA, the new reincarnation of the cybersecurity bill known as CISPA that Congress has been kicking around since 2013. 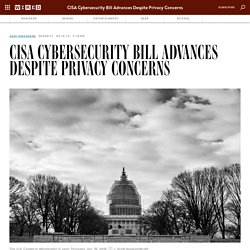 But today that zombie bill lurched one step closer to becoming law. The Senate Intelligence Committee passed the Cybersecurity Information Sharing Act, or CISA, by a vote of 14 to one Thursday afternoon. The bill, like the failed Cybersecurity Information Sharing and Protection Act that proceeded it, is designed to encourage the sharing of data between private companies and the government to prevent and respond to cybersecurity threats. But privacy critics have protested that CISA would create a legal framework for companies to more closely monitor internet users and share that data with government agencies.

After Thursday’s vote, Senator Ron Wyden—the only member of the Senate’s intelligence committee to vote against the bill—repeated those privacy concerns in a public statement.