Privacy for all Android Apps. Oversec constantly monitors the text on your screen. 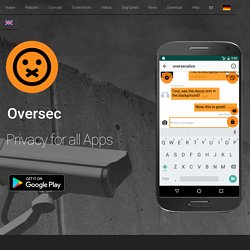 When it finds an encrypted text, it tries to decrypt it and then shows the decrypted text as an overlay in place of the encrypted text. In order to encrypt a text, Oversec shows a button next to an active input field. After having entered the secret text, tapping that button makes Oversec read the text, encrypt it and put back the encrypted text into the field. It is now ready to be sent in the subjacent app as usual - the app doesn't even know that it is sending encrypted data! Oversec also features a unique way of encoding encrypted messages. You may also encrypt and send photos through Oversec - its unique camera mode even allows you to take and send an encrypted photo without ever storing the original photo on the device. Oversec überwacht laufend alle Texte auf dem Bildschirm. Genauso liest Oversec Klartext aus einem Eingabefeld, verschlüsselt diesen und schreibt dann den verschlüsselten Text zurück in das Eingabefeld. 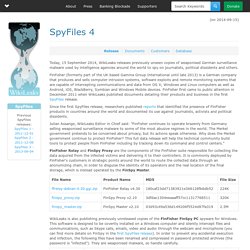 FinFisher (formerly part of the UK based Gamma Group International until late 2013) is a German company that produces and sells computer intrusion systems, software exploits and remote monitoring systems that are capable of intercepting communications and data from OS X, Windows and Linux computers as well as Android, iOS, BlackBerry, Symbian and Windows Mobile devices. FinFisher first came to public attention in December 2011 when WikiLeaks published documents detailing their products and business in the first SpyFiles release. Since the first SpyFiles release, researchers published reports that identified the presence of FinFisher products in countries around the world and documented its use against journalists, activists and political dissidents.

Mobile/Janus. Overview Janus is a compression and privacy proxy with the goal to provide more secure and efficient mobile browsing. 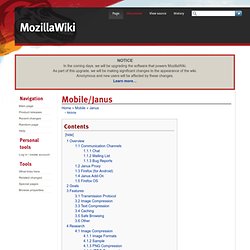 The goals section gives some details on our objectives and the ways we want to achieve them. The Janus Proxy is currently using the experimental SPDY protocol but will use the upcoming new HTTP/2 standard when it is finalized. The proxy does compress and re-encode media files using techniques described in the features section. Communication Channels Chat You can reach the developers of the proxy on the #janus channel on the Mozilla IRC network. Mailing List For asynchronous discussions, use the janus-dev mailing list. Bug Reports The easiest way to report bugs is using the Report Bug feature on the Janus add-on. Janus Proxy The Janus Proxy source code is hosted on GitHub. Firefox (for Android) The Janus Proxy requires secure SPDY (soon HTTP/2) proxy support on the browser, which are supported on Firefox 33 and up. 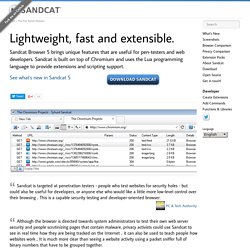 Sandcat is built on top of Chromium and uses the Lua programming language to provide extensions and scripting support. See what's new in Sandcat 5 Sandcat is targeted at penetration testers - people who test websites for security holes - but could also be useful for developers, or anyone else who would like a little more low-level control over their browsing .. This is a capable security testing and developer-oriented browser. Although the browser is directed towards system administrators to test their own web server security and people scrutinizing pages that contain malware, privacy activists could use Sandcat to see in real time how they are being tracked on the Internet .. it can also be used to teach people how websites work .. RecALL - keit. XRay · XRay. New tool to increase the Web's transparency The Problem We live in a data-driven world. 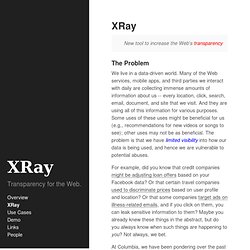 Many of the Web services, mobile apps, and third parties we interact with daily are collecting immense amounts of information about us -- every location, click, search, email, document, and site that we visit. And they are using all of this information for various purposes. Some uses of these uses might be beneficial for us (e.g., recommendations for new videos or songs to see); other uses may not be as beneficial. Infinit - The easiest way to send files.